A STORY OF HISTORY 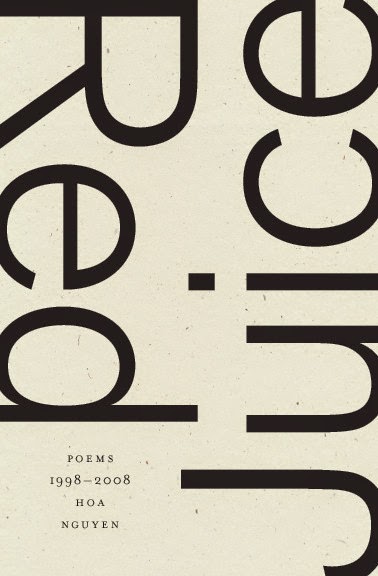 The wonderful thing about American poet, editor, publisher, expatriate and current Toronto resident Hoa Nguyen’s [see my profile on her here] new collection, Red Juice: Poems 1998 – 2008 (Seattle WA/New York NY: Wave Books, 2014), is knowing it collects all of her published work prior to her third and most recent collection, As Long As Trees Last (Seattle WA/New York NY: Wave Books, 2012) [see my review of such here]. Collecting the work of her two trade collections—Your Ancient See Through (Subpress, 2002) and Hecate Lochia (Hot Whiskey Press, 2009)—as well as a small handful of chapbooks including Dark (Mike & Dale’s Books), Parrot Drum (Leroy Chapbook Series), Let’s Eat Red for Fun (Boog Lit), Red Juice (effing press), Add Some Blue (Backwoods Broadsides), Poems (Dos), What Have You (Longhouse) and Kiss a Bomb Tattoo (effing), it becomes interesting to see the trajectory in Nguyen’s work spread across some two hundred and fifty pages. While striking over the pages of her first few small publications, it is through the publication of the chapbook Red Juice in 2005 where her work really begins to solidify. The first piece that really catches is the poem “Up Nursing,” which opens both the chapbook and book-section “Red Juice” of the new Red Juice: Poems 1998 – 2008, and packs an enormous amount in a very small space.

Why try
to revive the lyric

In just a few short lines, she manages to articulate small observations and frustrations on the domestic, the mundane and the lyric, highlighting a series of packed and pressured silences. After originally appearing in the chapbook, the poems in this section were incorporated into the trade collection Hecate Lochia, a book rich with blood, laundry, domestic patterns and children’s birthday parties. In fact, it was Hecate Lochia that first brought her work to a larger attention throughout the United States, showcasing a poet serious in her articulation of small moments, and how the fantastic can be buried deep within. As part of an interview for a profile I wrote on her for Open Book: Ontario, Nguyen responded:

I write poems one at a time and tend not to approach the page with an idea, concept or project in mind. I write in engagement with and informed by other poets. What this looks like is that I’m deeply reading a full-length volume of poetry — or a selected or collected volume; I’m noticing different rhetorical happenings in the poems, their patterns and use of language. And then after reading a section of poems aloud (this I do with a group of poets participating in the private workshops I lead), I write by inviting these strategies as I write while still experiencing their language or voice in my body and other sites of reception.

Throughout Red Juice: Poems 1998 – 2008, Nguyen’s poems are composed entirely of presence, of articulating a series of particular moments in which the narrator/author are entirely present, whether the classroom, the kitchen, the bedroom or the yard, as well as in the far-larger scope of the world. In his introduction to the collection, poet and critic Anselm Berrigan describes Nguyen’s poems thusly: “Immediately apparent inside Nguyen’s poetry, to me ast least, was a command of voice as an ongoing structural phenomenon, built through diction and velocity while giving off an implicit belief in the agency of a life and the agency of a poem, at once.” Further on:

Phrase by phrase Nguyen’s work can be conversational, playful, funny, angry, acutely self-aware, and loaded with sensory information. The poems’ accrual of emotional significance (an aspect of their form) is evenly distributed among points of consciousness and their attendant pressures: the continuous need to assert the oddity of action that makes up a self; the necessary figuring and refiguring of love and intimacy in a shared space; bringing babies who become children with their own relationships to language into that space (“Would you like a K sandwich?”); anxiety about money, time, work, art, family, upbringing, the question of fate, the murkiness of origin; resistance to the notion of permanent war as a public, domestic, agreed-upon mind frame in which to take part, while reckoning nonetheless with the body counts.

It is through everything that Berrigan brings up, as well as the way she blends so much of it in the simple cadence of a couple of lines, such in the poem “No One Wants,” writing: “Driving a hole / in the ozone layer // Grey transformer box / hulks in the backyard / and we have the 60th anniversary / of the bombing of Hiroshima[.]” Or here:

What your dark eyes take back
to itself, hugged in a curve
of toughness. The land between us is flat.
Let’s say we are ruined, Minneapolis,
bricked against ourselves. A red rag
in the kitchen. This isn’t important or I am.

I never wanted to touch you
and still do. How can we pray or find
what collects in heaven, Father?
I’d be surprised by elegance,
meaning something like rugs
and leather. Soft and tough. This.

I want belief like this. Leaving
the sea is a rag doll I once was. Texas
clouds in dreams, swinging. My loving you
once, mud puddle, swing set.

I’m curious to know if any of the works in the new collection were previously uncollected, or if all had appeared prior in chapbook or book form. Given the absence of any more recent work, as well, might this suggest a new collection looms somewhere over the horizon?