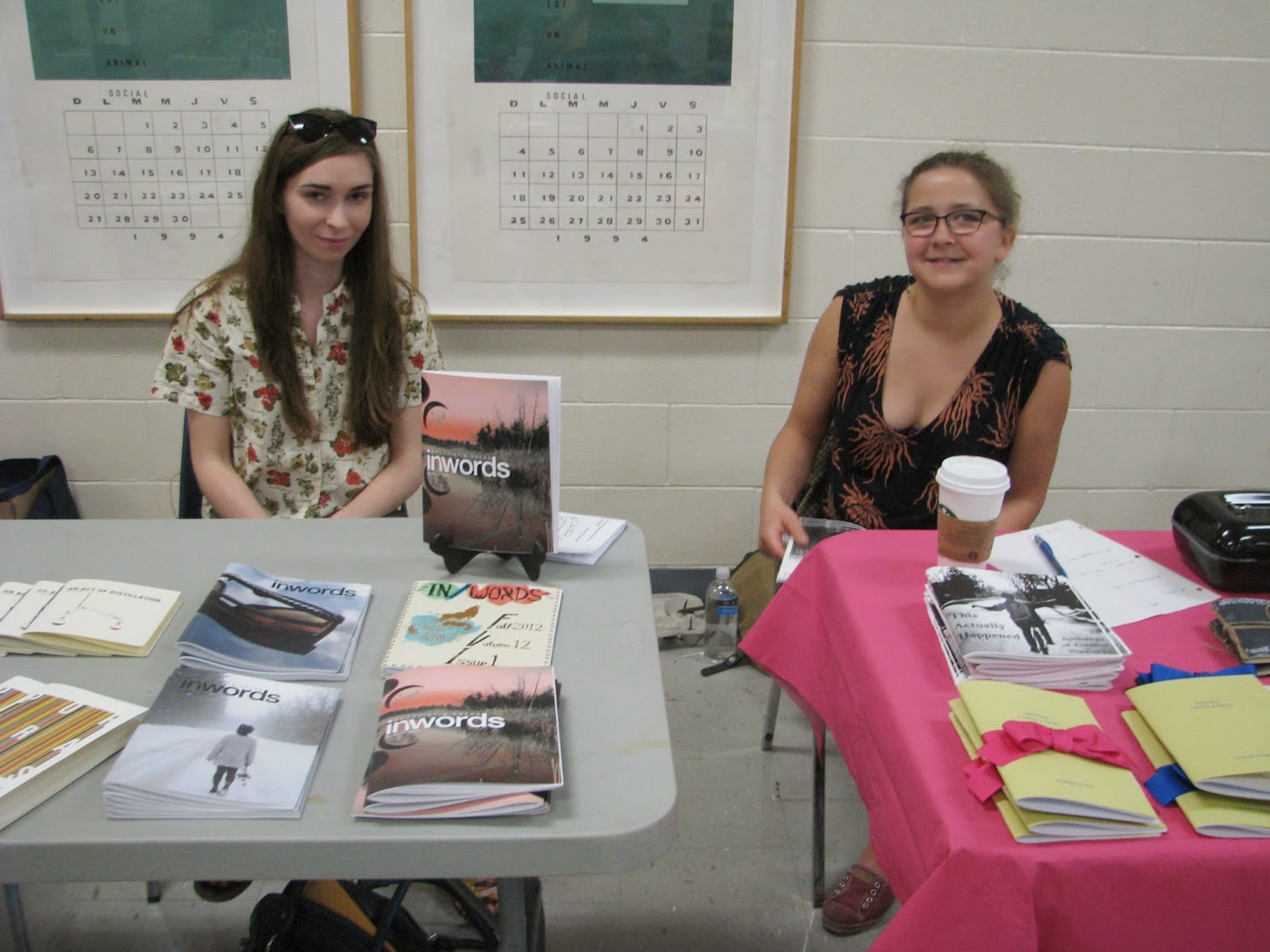 [Rachael Simpson of In/Words and Nina Jane of & Co. Collective] Another small press book fair come and gone. This fall, if you can believe it, will be the twentieth anniversary of our little event. How did we get here?

Ottawa ON: I’m intrigued by Chris Johnson’s Down Bank: Ex Haibun (2014), a small folded chapbook produced through Carleton University’s In/Words magazine and press [see the profile I wrote on them over at Open Book: Ontario]. Composed as ten haibun written about an ex-girlfriend, Johnson skirts the line between some very fine writing and a simple re-telling of a post-breakup narrative. This provides for a pretty uneven series of pieces, but the sections that work are really quite lovely, especially when Johnson worries less about telling the story of how the breakup was hard and more about focusing the language on a particular small moment, stretched out across a couple of lines.

When I said my foreskin tore the last time we had sex and there was blood stains on the bed, I meant your body is earthly and I have spilt blood into the thickening of your skin, tissue of skin, torn for another planting, another seeding, and you never saw red until I called you honey, you also carried on your back yin and embraced yang with your arms and shoulders, you were balanced perfectly, my friends complimented your breasts when we went skinny-dipping in my friend’s inflatable pool, equal parts attractive and classy, and still you hid your tattoos for your grandmother’s funeral; honey, did the bees make you?

Test, what day is today, hungry, who has not eaten in days

It has been interesting to watch Johnson play with form and influence, from this chapbook of haibun (referencing Fred Wah, who also worked with the form) as well as an earlier chapbook that came out of his reading the work of Phyllis Webb [see my review of such here]. I like the exploration of these pieces, and the places his writing attempts, far more ambitious than most of the poets around him. Despite the unevenness of this small item, I think I would recommend Down Bank: Ex Haibun; Chris Johnson is a young poet worth paying attention to. Who knows what he might come up with next? 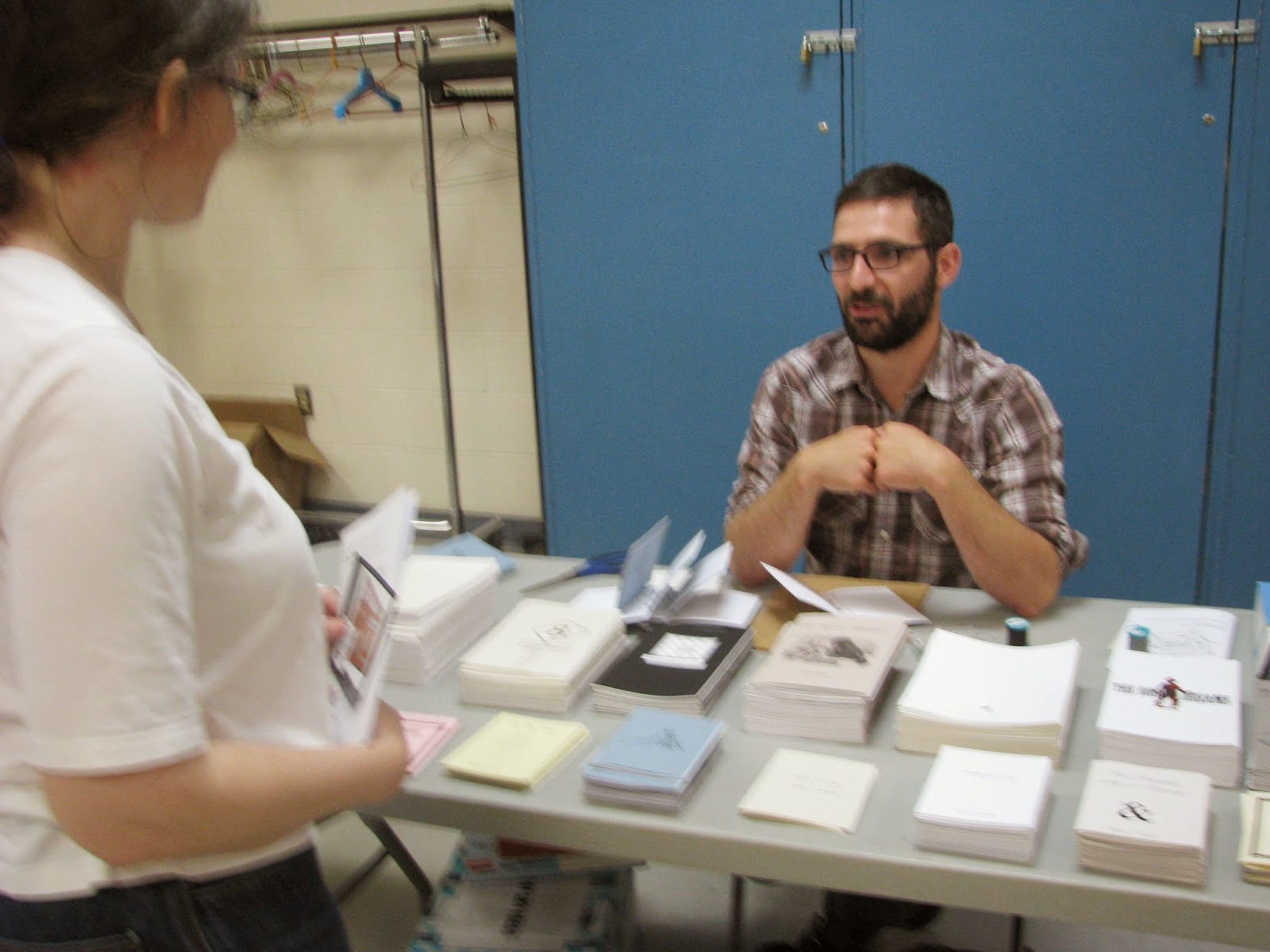 [Michael e. Casteels talking to Pearl Pirie] Kingston ON: Cobourg,Ontario poet, editor and publisher Stuart Ross continues his curious engagement with the poodle in Nice Haircut, Fiddlehead (Puddles of Sky Press, 2014), a chapbook of twelve short lyric poems. Admittedly, the most his ongoing muse, the mysterious poodle, appears in the collection is on the cover, but any follower of Ross’ work knows well enough to not simply pass over such a reference. Do I make too much of this?

Nice haircut, fiddlehead,
juggling beneath
a slobbering dog
by the side
of a gold-veined
lake.

Ross’ poems are constructed out of a series of moments, composed nearly as single, stand-alone points, that accumulate and build into pieces that one can’t even imagine, or easily describe. His ongoing engagement with humour and the surreal often work as a kind of distraction, allowing Ross to work through what he is really doing within a particular poem, leaving the reader with something striking, powerful and sometimes slightly sad and far more meaningful before one even realizes. His poem, “ABECEDARIUM APOLOGY,” is magnificent, and might just have to be heard to be believed, and his “SONNET” has an enormous amount that happens in a very small space. Ross’ playful engagements with poetic forms often brings a fresh take on what so many others have previously done, twisting a variety of expectations around and away. In many ways, Stuart Ross might just be one of the most published of Canada’s underrated poets. Why does humour get such a bad rap?

Bye Bye Birdie.
Going Down the Road.
The Ticket That Exploded.
Al Purdy.

Felix the Cat.
Dennis Kucinich.
A Day in the Life of Ivan Denisovich.
Doctor Rat.

Jack and the Beanstalk.
Talk Talk. 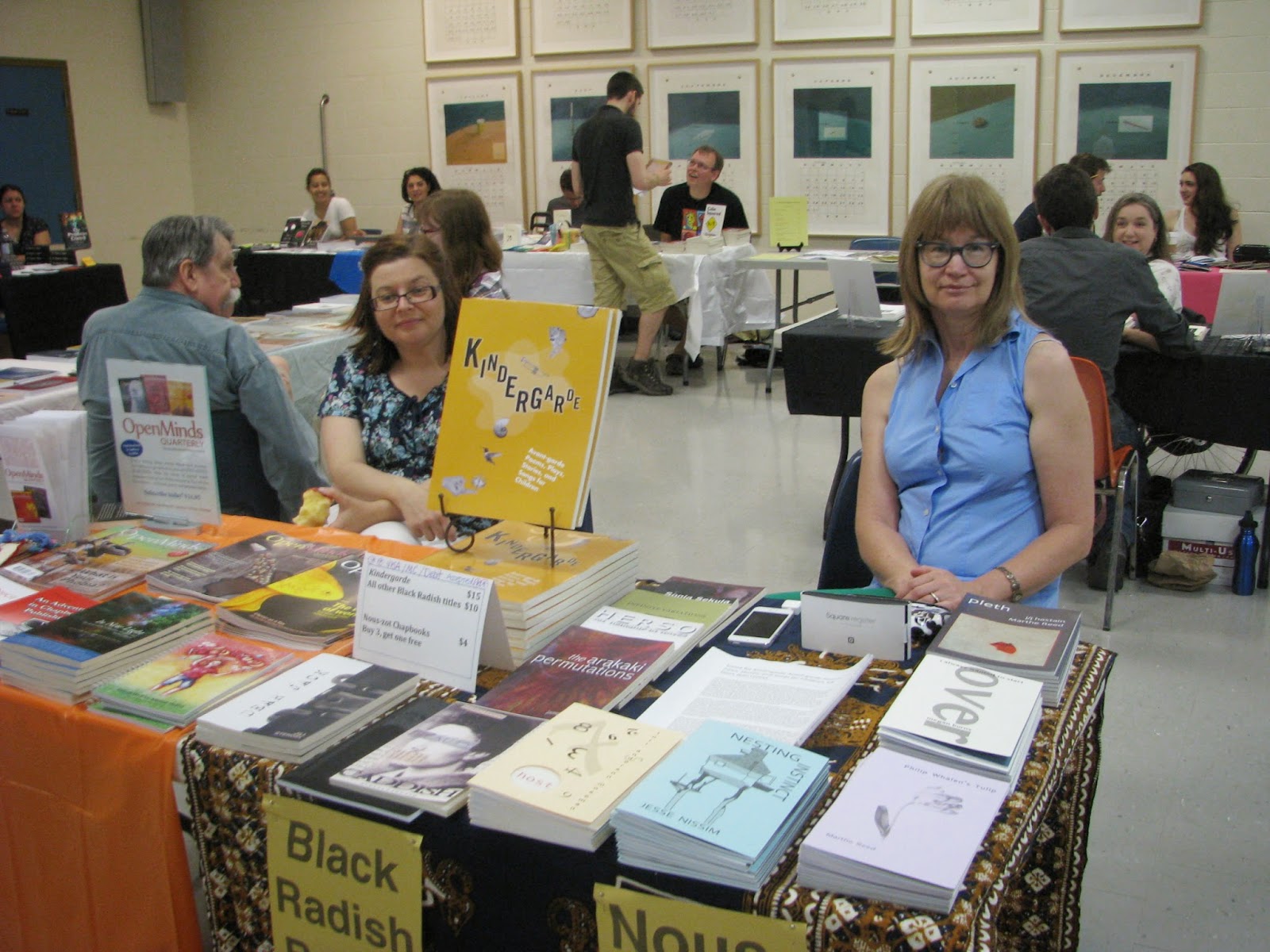 [Marthe Reed, tabling] Grand Rapids MI: Having recently moved from Lafayette, Louisiana to Syracuse New York, we were able to engage with a variety of American poet Marthe Reed’s publishing enterprises, including her new chapbook, ROOMS (Shirt Pocket Press, 2014). A collection of seven short poems, each exist as a kind of point-form sketch of a different room, perhaps in the house they left behind in Lafayette, which by itself suggests an interesting artifact on their prior space. As bpNichol explored the body through his Selected Organs (Black Moss Press, 1988), a sequence later published in full as Organ Music (Black Moss Press, 2012), so too does Reed explore the body of a house, but reduced, sketched, and down to the bare essentials.