that none of the women here

May God heal us.

In the morning I had a belief in her.

I had other beliefs this morning I did not express.

And I lost the doctrine that my dreams provided me with,

this morning. (“Girliness is a North American affectation”) 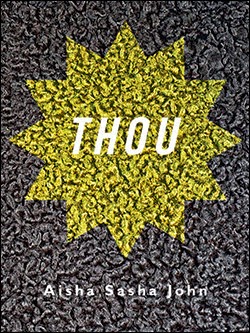 From Toronto poet and performer Aisha Sasha John comes her second trade poetry collection, THOU (Toronto ON: BookThug, 2014), close on the heels of her first, The Shining Material (BookThug, 2011). A book of meditative chant, sing-song patter and performance lyric, THOU is a collection of poetry shaped around a pronoun, inquiring, shaking and prodding and shattering. The two sections that make up the collection—“Physical” and “The book of you”—are self-described by the author as being two long poems, both of which are composed of accumulated lyric fragments of titled and untitled poem-shards that speak, accuse, question, shout out loud and often require if not outright demand the reader to respond. “I have to report something physically uncomfortable.” she writes, early on in the collection. “I said No, but I have to tell you – it’s ‘cause of physical reasons. / The inside of which is sticky.” There is something compelling about the way John discusses female beauty and the conflict of impossible cultural standards set upon women in such an open and even humourous way, managing to bring forth a conversation. Indeed, this is a very physical book. “The good and medium ass,” she writes, towards the beginning of “Physical,” “the long and medium waist // of a man. // The bit of back fat that romances his crisp shirt.” Later on, she writes:

I like to think of my body as a garment.

I have borrowed my body.

It means I need all afternoon to think every day.

That’s what it means.

I have to think about existence every fucking day.

And I am unwasteful.

If I don’t consider the day how can I live in it.

Often these are physical objects.

I consider the objects in the day.

I consider the distances between bodies.

If I am the same as other people, why don’t they like poetry. I love poetry.

If I am the same as other people, why don’t they like poetry. I love poetry.

And I am the same as other people. I’ve checked. (“Okay I skimmed the book; that’s enough.”)

This book is almost built as a call-and-response or a conversation, as John engages a series of ideas and cultures through speaking directly to the external “thou” and internal monologues. As she writes in the second section: “I wanted to tell you some secrets. / I want a different relationship with my stories.” There is something of the collage to the way in which John has composed her THOU, two sections of poems-as-accumulation, structurally akin to works by Canadian poets Phil Hall and Dennis Cooley, as well as American poet Kate Greenstreet, for the sake of their books each managing to be a kind of catch-all, yet maintaining a coherence that almost belies what each work actually contains. This is a book that works to engage with the world, the body, the self and the other, including the darker elements of such engagements. As John writes, deep in the first section, near the middle of the collection: “I am weary / at the future. / I am always interested in things; it will never stop. / I can plump minutes with my always interest. / but I am weary.”