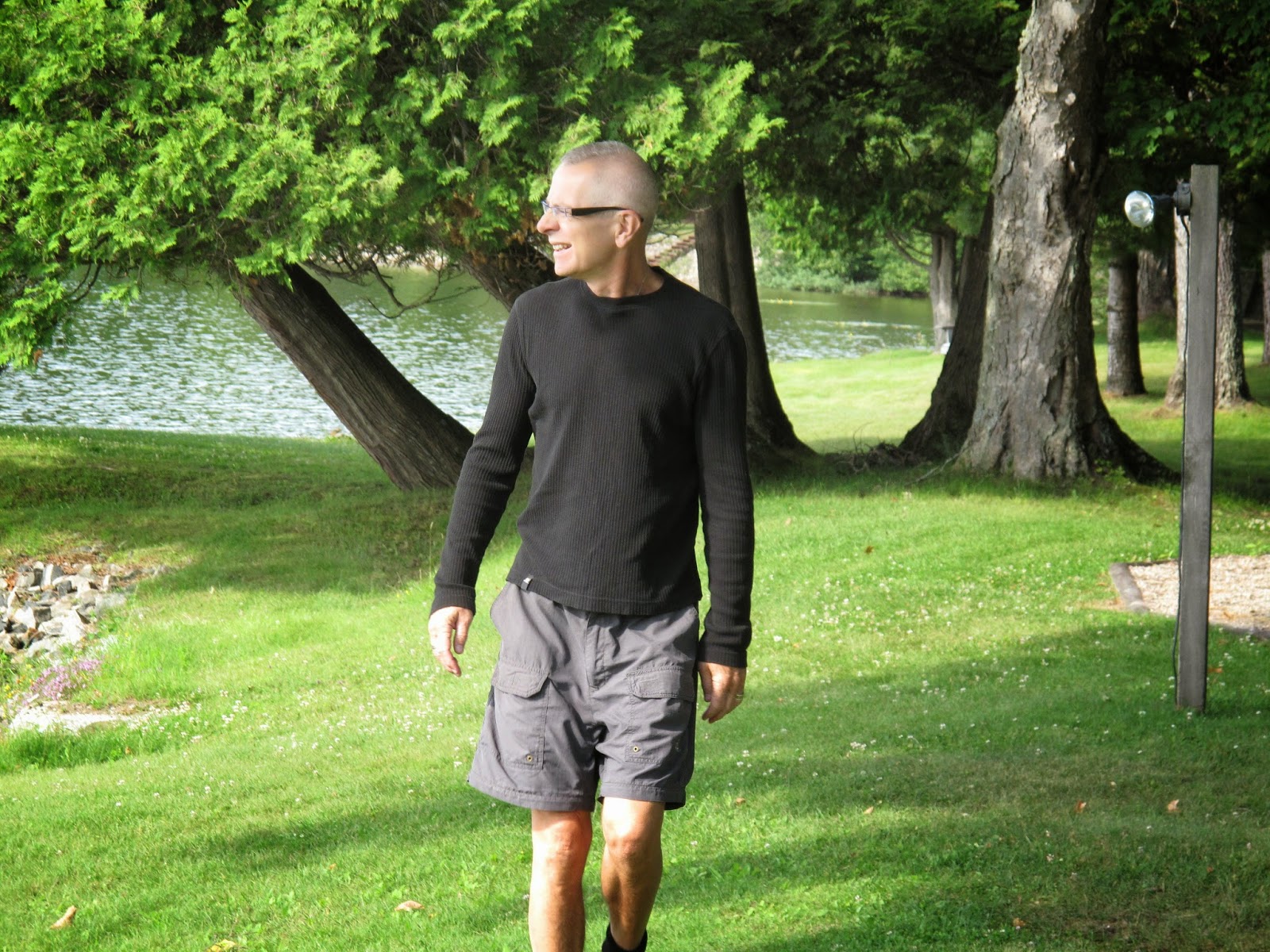 Brian Henderson is the author of 10 collections of poetry, one of which, Nerve Language, was a finalist for the Governor General’s Award and about which the jury wrote, “Terrifying and beautiful, the language…is an incendiary crossing of wires. These poems are as likely to break you open as they are to explode.” His latest, Sharawadji, was a finalist for the Canadian Authors Association Award for Poetry. A new volume, [OR] is forthcoming from Talon. He is the director of WLUPress.

1 - How did your first book or chapbook change your life? How does your most recent work compare to your previous? How does it feel different?
First book was in the Precambrian, so the flora & fauna were quite different & the weather a lot warmer, if memory serves, but I enjoyed actually working through preparing the thing for publication at Porcupine’s Quill with Tim & Elke & my editor John Flood. To see it in print rendered all the writing towards it into a different kind of physicality from the notebooks & pens I was used to to an object that still somehow was not a product. Books are rather strange that way, don’t you think? But that objectification was a confirmation: I knew there was a path, even if I were going to have to make it up as I went along.

At the launch party in our house I remember Frank Davey saying something to effect of “It’s a very interesting book, but what does it mean?” So in some ways perhaps through all the intervening years I’ve always been writing at the margins — not in the sense of a radical poetics necessarily, but informed by some of that. Not in the experimental school completely & not in the lyric anecdotal school either.

2 - How did you come to poetry first, as opposed to, say, fiction or non-fiction?
When I was young I wanted to be a composer (of all things!), but having no musical training at age 14, I somehow ended up scribbling lines of words; these happened to embody some rhythmicality which I sort of liked. And then the work of Dylan Thomas found me.

3 - How long does it take to start any particular writing project? Does your writing initially come quickly, or is it a slow process? Do first drafts appear looking close to their final shape, or does your work come out of copious notes?
This really depends on the “project” -- if indeed there is one. If there is, the writing can often be a slalom. I love reading & am always reading so any research is not necessarily done beforehand but hand in hand. If there isn’t a project, then things tend to move a little slower & accumulate. This is a more sedimentary & less metamorphic process.

4 - Where does a poem usually begin for you? Are you an author of short pieces that end up combining into a larger project, or are you working on a "book" from the very beginning?
A poem begins in a phrase, line or an image -- & by “image” I mean a trope, not a visual “picture” & certainly not a story, & even less does it begin with “something to say”.

5 - Are public readings part of or counter to your creative process? Are you the sort of writer who enjoys doing readings?
I find with readings that the personality of the reader often gets in the way & of course there’s no opportunity to sit with a line or something, so I’m not a big fan. I’m not a voice oriented writer — I never consciously went out looking for my own voice for instance. And I’m not by nature a performer. I relish the page & what writing does.

6 - Do you have any theoretical concerns behind your writing? What kinds of questions are you trying to answer with your work? What do you even think the current questions are?
This is a really complex question disguised as a simple one. Can I just answer “Yes”? The difficulty I have here is that the specifics of my concerns are shifting. But maybe generally I can address this by saying that I’m fascinated by the presence/absence paradox that is borne out in writing. So concerns about representation, materiality, the imaginary of meaning (& meaning as commodification), especially in the context of reading & how perception & memory cover over their hallucinatory basis. I’m interested — let’s put it in Lacanian terms -- in that remainder, that left over, that lies outside the realm of the Symbolic which might therefore show us something of the Real.  How the non-place of language opens a gap in the world, in that place where, as Ian Bogost has written: “wonder darkens”.

7 – What do you see the current role of the writer being in larger culture? Does s/he even have one? What do you think the role of the writer should be?
Wow. Another large question. Well if (most) media coverage is anything to go by, the role of the writer in society today is entertainer, or possibly educator or insight giver on some topic or issue or other, or maybe wisdom guide on the path of life. Nothing wrong with these roles. But. And the writing I like says “But”, or “What if”. Sometimes just “Not”.

8 - Do you find the process of working with an outside editor difficult or essential (or both)?
I think it’s essential that some other sets of synapses get to work on a work in progress; it’s not certainly just a question of another set of eyes. I’ve been lucky: my editors have been ideal readers, asking questions from inside the work, saying “but” & “what if”.

9 - What is the best piece of advice you've heard (not necessarily given to you directly)?“Be spear. Be spear.” Rilke.

11 - What kind of writing routine do you tend to keep, or do you even have one? How does a typical day (for you) begin?
I’m a working stiff, so it’s the office for me. I have no writing routine, but I’m always reading, & I have Evernote ever at the ready!

12 - When your writing gets stalled, where do you turn or return for (for lack of a better word) inspiration?
Books, books books. Poetry, cultural theory, science studies, the odd novel — & usually “odd” is right.

13 - What fragrance reminds you of home?
Cedar. We’re engulfed in cedar trees here in our spot in the Grey Highlands. And smoke. It’s great to have a wood burning fireplace again. But not cedar in the fireplace; elm.

14 - David W. McFadden once said that books come from books, but are there any other forms that influence your work, whether nature, music, science or visual art?
Frye also said that I think. But yeah, all the above -- & junk yards, hardware stores, storerooms, warehouses, old post-industrial areas of cities.

15 - What other writers or writings are important for your work, or simply your life outside of your work?
I’ve really been enjoying Arkadii Dragomoshchenko & Brian Massumi recently.

16 - What would you like to do that you haven't yet done?
I think maybe I’d like to canoe the Nahanni one of these days before it’s too late.

17 - If you could pick any other occupation to attempt, what would it be? Or, alternately, what do you think you would have ended up doing had you not been a writer?
I might have stuck with being a drummer, but the routine universe of bars started to take it’s toll. Maybe a prof of CanLit, but when I graduated there were no jobs in the field for 5 years & by then I had moved on.

But really, if I weren't writing, perhaps I’d not be interested in any of these kinds of things and I’d be standing in Amazonian tributary tagging tetras.

18 - What made you write, as opposed to doing something else?
Bad luck? My father said laziness once, but then he liked to play guitar. Nope, I think it’s the sense of surprise at the weirdness & rightness that comes about (at the same time) in that non-place (of writing) when the writing is flying & something new pop’s out. Particularly if I don’t completely understand it. So it’s probably serotonin.

20 - What are you currently working on?
I’m working on a book of things I guess you could say. Many of the poems are lists of things. Lists which try to highlight how alien things are, the things we take so much for granted. They try to tear small holes in the taken-for-granted. They try to peel away what we might know to leave a narrative of debris. They strip the narrative to reveal the thing & the thing to reveal the narrative. "Objects may be custodians of our narratives" Peter Schwenger says in The Tears of Things; objects may also refuse (our) narratives (& invent their own). Are things really dead? I think maybe it’ll be a book of still life.

What can I say. I have always admired Brian's way with words!