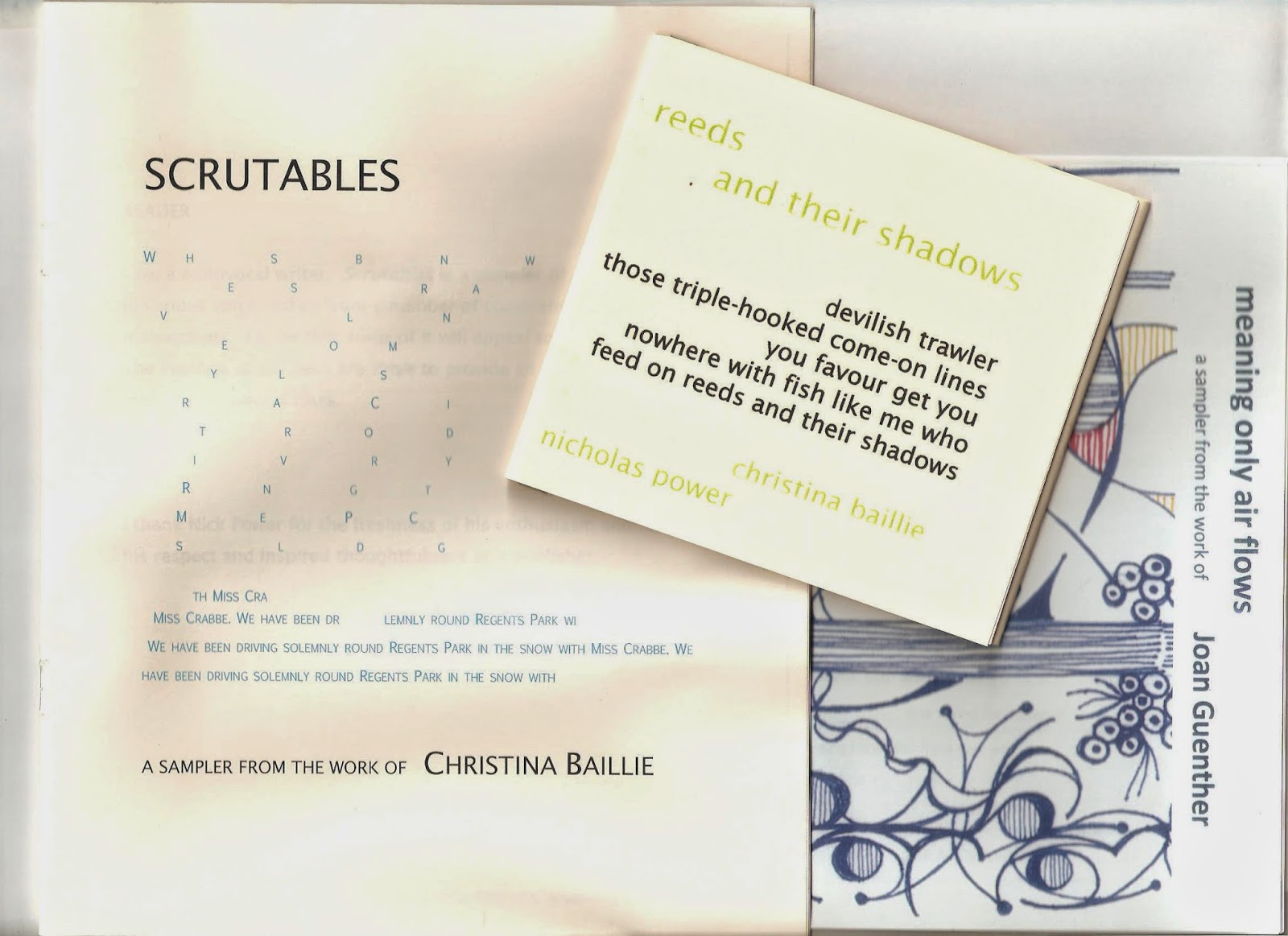 Nicholas Power is a founding member of the Meet the Presses collective, and has performed with the sound poetry ensemble Alexander’s Dark Band. His collection of poetry, Melancholy Scientist, is just out from Tekst Editions. His No Poems were published in Paris by Battered Press. He has several books with his own Gesture Press including Writing on Water, Swing Rhythms and The Steady Pull of a Curious Dog. His poems from the manuscript Dancing with Gravity are in issues of Draft, Rampike and www.ottawater.ca.

1 – When did Gesture Press first start? How have your original goals as a publisher shifted since you started, if at all? And what have you learned through the process?
Gesture Press started in June 1983 with the printing of a four page series of poems (Indirect Narration) based on a Latin Grammar book.

One of the original goals was to ‘seize the means of production’. In other words, you weren’t going to wait for someone else to decide if your work was publishable. Aesthetically, it meant that each ‘book’ would be close in time but also in form to the work being printed. Each Gesture Press production has been unique in the way it’s printed or bound or sized. We’ve done broadsides, postcards, chapbooks and a perfectbound book. (In 1989 we did a chapbook with a reflecting mylar sheet tipped in to read John Riddell’s reverse-printed Traces (if you bought a copy without the mylar let me know, I still have some))

I’d say I’m more focused on my own writing now so the publishing that I do – the Writing on Water series of leaflets, Swing Rhythms – is to have work to distribute at readings or to interested people.

2 – What first brought you to publishing?
I’d gotten a Gestetner duplicating (mimeograph) machine free from a theatre that had switched to photocopying. It was electric but I found that I had better control if I hand cranked the roller. I typed or cut the stencils then hooked it on to a roller and wet ink would come through the stencil onto whatever paper I put through the machine. Gesture as a choice of name for the Press came from the root of Gestetner.

3 – What do you consider the role and responsibilities, if any, of small press publishing?
I think publishing is continuous with the process of writing. I have an idea not just of the individual poem but the physical way in which it is produced. Having direct access or the willingness to get involved at that point makes the process more interesting. It also makes the act of publishing more collaborative. I heard Mark Laba read the Mack Bolan Poems and I knew they had to be published to look like pulp fiction.  We got in trouble with Mack Bolan’s original publisher because Michael Reinhart’s cover for our chapbook was such good a spoof of their adventure fiction (Mark Laba, with Bolan’s muscles, in round-rimmed glasses holding a giant fountain pen like a machine gun). I got to know Blaine Speigel’s work as a photographer. I put his multiple exposures together with Sheila Murphy’s writing. I published a steve smith/jwcurry collaboration; a jwcurry/George Swede poem sequence. They all came out of the energy and momentum of seeing and hearing work that you wanted to see out there - Carlyle Baker, Gary Barwin, Daniel Bradley, Randall Brock, Lillian Necakov, Julia Steinecke, Yves Troendle, Eddy Yanofsky.

4 – What do you see your press doing that no one else is?
I did a book of poems to go with a Fringe Festival show in 2011. The show itself was all text from poems I had written. So the chapbook was a record of those performances and the development of the script. In 1992 we did a Live Magazine with Katy Chan and Clint Burnham when they were running the Mental Radio magazine and reading series. That was a whole night of Gesture Press readers, music and visuals. I published Michael Brodribb’s long poem based on his father’s letters in the form of a war-time letter with the appropriate postage and stamped by the censor.

5 – What do you see as the most effective way to get new chapbooks out into the world?
Meet the Presses – a literary market we hold often here in Toronto; any opportunity for direct selling – mostly readings. I always carry chapbooks with me and pull them out (like a good ‘chapman’) when it’s opportune.

6 – How involved an editor are you? Do you dig deep into line edits, or do you prefer more of a light touch?
I like to get involved in the work as an editor, to get as close to the writer’s intentions as possible, and that can include clarifying individual words and repositioning lines. I share my responses with the writer and if it helps shape the work that is ultimately their decision. I’ve suggested titles for a couple of the books I’ve published.

7 – How do your books get distributed? What are your usual print runs?
100 – 200 copies is a big Gesture Press print run. Pure Mental Breath by Sheila Murphy was 500 at Coach House Printing.  I’ve gone back and reprinted a line in the mind a couple of times.

8 – How many other people are involved with editing or production? Do you work with other editors, and if so, how effective do you find it? What are the benefits, drawbacks?
Over the years Gesture Press has been a one-person operation and the ebb and flow of the press’s output and approaches have almost entirely been dependent on the vicissitudes of my life. I put the press on hold for several years when I was raising my son, working full-time and trying to get some of my own writing going.

I used a designer (Virginia Morin for Pure Mental Breath); I’ve had several cover artists (Lillian Necakov for a journey toward the end in the shape of air) (Nicola Wojewoda for In Separate Rooms)

I was part of a collaborative reading with jwcurry and Steve Venright that became an envelope full of work where we published each other – transforming the pieces in the process. That was a great way to work but it was specific to that occasion.

Chris Warren and I did a very selective anthology of writers coming out of the York creative writing program. (Ten Tandem via York)  It was a good approach to that kind of publication. I liked the back and forth about who and what to put in. Stuart Ross did the cover.

I worked with the artist Camilla Burgess on a book of poems and drawings (The Steady Pull of a Curious Dog) that was a collaboration from the start.

9– How has being an editor/publisher changed the way you think about your own writing?
Definitely. I think because I’ve been interested in poems in a series – and looked for suitable ones to publish in Gesture Press - that has been an area of interest in my own writing. I write occasional and individual poems but I’ve worked at several series. In that sense, you’re composing for the book.

10– How do you approach the idea of publishing your own writing? Some, such as Gary Geddes when he still ran Cormorant, refused such, yet various Coach House Press’ editors had titles during their tenures as editors for the press, including Victor Coleman and bpNichol. What do you think of the arguments for or against, or do you see the whole question as irrelevant?
Since the beginning I’ve published my own work through Gesture Press. I’ve also submitted manuscripts for publication elsewhere. [a modest device] came out with The Writing Space, No Poems with Battered Press and Melancholy Scientist recently with Tekst Editioins.

11– How do you see Gesture Press evolving?
The shift that’s already taken place was in 1988. I stopped using the Gestetner and began using photocopiers and printers. Currently Gesture Press functions as part of my own writing process and is not generally open for submissions. I did publish two samplers last year to focus on the unpublished writing of Christina Baillie (Scrutables) and Joan Guenther (meaning only air flows).

12– What, as a publisher, are you most proud of accomplishing? What do you think people have overlooked about your publications? What is your biggest frustration?
Eddy Yanofsky’s book In Separate Rooms (published in 1990) helped Eddy win the Gwendolyn MacEwen award. Mark Laba won what is now the bpNichol chapbook award with his Mack Bolan Poems. Mainly I’m proud of how Gesture Press supported the work of writers who have kept on writing. Having to deal with the distribution has never been my strong point but I’ve enjoyed the camaraderie of doing the small press book fairs and Indie Literary events.

13– Who were your early publishing models when starting out?
bp Nichol and bill bissett were working in what’s referred to as ‘dirty mimeo’. I consciously produced Randall Brock’s solid blue (1985) as an homage to that kind of production. jwcurry was my first contact and very much a continuing influence and a collaborator. I was in conversation with and collaborating with Stuart Ross at Proper Tales Press and we gathered many other presses into our monthly Meet the Presses and then The Toronto Small Press Book Fairs in the 80’s.

14– How does Gesture Press work to engage with your immediate literary community, and community at large? What journals or presses do you see Gesture Press in dialogue with? How important do you see those dialogues, those conversations?
I work with other artists (Get Happy was a Fringe production of music, dance, poetry that included a chapbook.)(The Steady Pull of a Curious Dog was in collaboration with the artist Camilla Burgess) and writers (reeds and their shadows was in tandem with Christina Baillie).

Gesture Press is part of Meet the Presses which is a collective of writer/publishers who organize independent literary markets.

15– Do you hold regular or occasional readings or launches? How important do you see public readings and other events?
Not currently, but we’re fortunate to have lots of venues in Toronto.

16– How do you utilize the internet, if at all, to further your goals?
I have a site where I post up poems:    www.gesturepress.wordpress.com

17– Do you take submissions? If so, what aren’t you looking for?
Not at this time

18– Tell me about three of your most recent titles, and why they’re special.
reeds and their shadows (Christina Baillie and Nicholas Power) is made up of parallel transiterations from Japanese tankas. I enjoyed the composition process and coming up with a small press (i.e. inexpensive) way to publish 36 poems on 3 sheets of 8½ by 14 with some colour and a Japanese-style binding. It grew out of a series of ephemeral pamphlets of my transiterations – writing on water.

Both Scrutables (Christina Baillie) and meaning only air flows (Joan Guenther) were published last year on the occasion of a Meet the Presses variety night. My intention was to introduce these mature writers to other publishers through ‘samplers’ of their work. ½