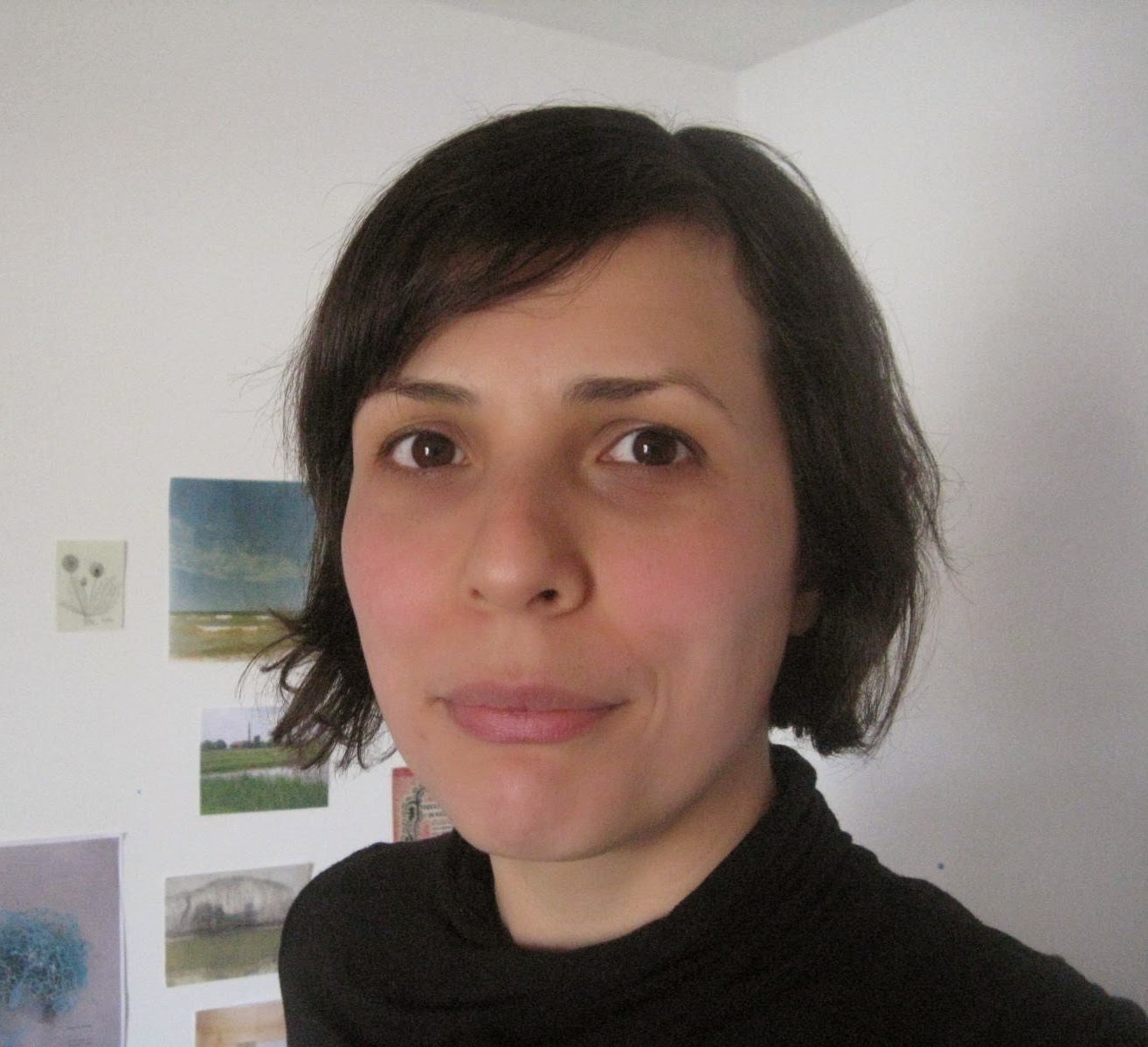 From early April to early June, I’m featuring short interviews with the authors of the six shortlisted titles for each of the three awards run through The League of Canadian Poets – the Raymond Souster Award, the Gerald Lampert Memorial Award and the Pat Lowther Award. Today’s feature is Kingston, Ontario poet Sadiqa de Meijer, whose book Leaving Howe Island (Fernie BC: Oolichan Books, 2013) is on the shortlist for the 2014 Pat Lowther Award. See my previous Pat Lowther Award shortlist interviews with Elizabeth Bachinsky, Anne Compton and Alexandra Oliver. The winners to all three awards will be announced on Saturday, June 7, 2014 at The League of Canadian Poets 2014 Annual General Meeting in Toronto.

Sadiqa de Meijer was born in Amsterdam and moved to Canada as a child. Her poetry, short stories and essays have been published in a range of journals and anthologies, including The Malahat Review, Geist, Riddle Fence and Poetry Magazine. Her first book of poems is Leaving Howe Island (Oolichan Books). A selection from the manuscript won the CBC Poetry Prize in 2012.

1. Leaving Howe Island is your first trade collection of poetry. What was your process of originally putting the manuscript together, and how long did it take? How do you feel your concerns as a writer has developed over the space of starting the collection to finally seeing a finished copy at your front door? How do you feel the work, and even the process of writing, evolved?
The oldest poems in the collection were written around 2005, but there are scraps from earlier work, too. And at that time, I didn’t have a sense that I was a writer, working towards a book – I wrote poems occasionally, and journal publication was the edge of my aspirations. But over the years, I started reading more methodically, writing regularly whether or not I felt like it, and revising seriously. And when I’d written forty or so poems that I figured I could live with, that was the first version of Leaving Howe Island.

Then a few of the poems were written after that initial compiling – Community Pool at Noon was one of those, and Corridor. I did feel, after writing them, that they belonged with the rest of the work, while some other new poems didn’t. So even though I didn’t start with a structure in mind, that initial assembling of the manuscript did generate a thematic or atmospheric whole.

2. Who do you read to reenergize your own work? What particular works can’t you help but return to?
The poetry of Gwendolyn Brooks, Elizabeth Bishop. The work of Dutch-American poet Leo Vroman. James Baldwin’s essays – Nothing Personal is a favourite. Michael Winter’s One Last Good Look. A recent find for me is Michelle De Kretser’s work – I loved her novel Questions of Travel.

3. You’ve lived in Kingston for quite some time, and I’m curious as to how the community of writers around you, as well as the landscape of Kingston, have contributed to your work. Do you think you might have been a different kind of writer had you lived in another part of the country?
Yes, I’ve lived in Kingston for more than a decade – and I still have an ambivalent relationship with the city. But the local writing and arts communities are wonderful: there are internationally known writers here, as well as new writers like myself, and conversations happen easily, whether at readings or in a park. Over the years, I’ve been given encouragement and criticism in the right doses.

Place, and our temporal bearings to place, are big for me - I blame my childhood, which spanned three continents. I like the effort of conjuring places that I’ve left. When I write about the Netherlands, the setting takes on dream-like qualities: in reality it has changed, but living here I’m only marginally aware of those changes, and so there’s a sense of ghostliness. Kenya is even more spectral to me, with some very clear fragments. But writing about Kingston is like sketching from life, and the results differ: the details aren’t limited to what I happen to (mis)remember – it’s an exercise in observation, recording. I’ve been working on that lately.

‘January’ is a Kingston poem in Leaving Howe Island. Stone boundaries, and then the breadth of the lake. That’s a transition that feels essentially local.

What another place would do, I’m not sure – but I know it would matter.

4. In an interview at Open Book: Ontario you mentioned teenage years writing out poems by Dutch poets. Looking over your writing, do you feel much influence by Dutch poetry, or was that something that fell by the wayside as you began reading works in English? Or do you feel your work is a blend of the two?
I still read Dutch poetry and other writing, so I’m sure it continues to influence me. But the question of how or to what extent – I may not have the perspective to say. One thing that characterizes Dutch literature for me is the precision and concision of language – it’s instructive territory when it comes to those qualities. In some of my poems, like ‘Corridor’, the influence is direct: I took the first line from a poem by the Dutch poet M. Vasalis.

Dutch writers have long paid attention to English literature. There’s a small signal of that somewhere in the letters between Elizabeth Bishop and Robert Lowell – a mention of the Dutch poet Judith Herzberg’s admiration for Bishop’s work. But to be influenced in the other direction is less common of course – one place for English readers to start is the Poetry International website, which contains many contemporary Dutch poems in translation: http://www.poetryinternationalweb.net/pi/site/country/item/6/Netherlands.

5. In a more recent interview by Susan Gillis, you said that “having a first language other than English could be a factor. […] I wouldn’t be surprised if that affects my syntax and diction to some degree.” I’ve read how an important part of the syntax of American poet Rosmarie Waldrop’s poetry comes from the fact that her first language is German, and how her English-language lines and phrases become almost unconsciously shaped by the diction of another language. Since speaking with Gillis, have you gone back and looked at any of your lines? What of the Dutch language itself do you see within, if anything?
This is something I’m still figuring out – it’s complicated, how a first language continues to influence us after another becomes dominant. And as you describe in Waldrop’s case, it happens almost unconsciously.

So for example, in a poem like ‘Dag en Nacht’, I’m half-aware that in writing “birds in the woodcut,” the words are very different from Dutch phrase, which would be “vogels in de houtsnede.” Then, later in that stanza, the line lands close to the Dutch with “rivers and acres,” which would be “rivieren en akkers.” I’m saying it lands, and that seems relevant: it has something to do with place and knowing the ground.

It’s not that I’m constantly translating as I write – but the immediacy or emotional weight that English words hold for me has to do with how much they sound like their Dutch counterparts.

Another thing about this example is that sometimes a Dutch word broadens the English equivalent for me, because of their common origins. So ‘acres’ in English at present means a quantity of land; in Dutch, ‘akkers’ means cultivated fields, which used to be true in English as well. When I use the word acres, that lapsed or archaic meaning is still there for me.

6. Literary awards have been known to shine spotlights on individual works and authors, as well as writing generally, but has also sometimes brought with it a particular kind of pressure, and a frustration for those works overlooked by awards. As a writer, reader and award-winning writer, what are your feelings on literary award culture generally?
Literary prizes are awarded based on subjective criteria, and so the question of which works get recognized or overlooked has a lot to do with the composition of juries. It’s important that those are diverse in aesthetics and demographics. I also think the terrain between those two factors is much murkier than we generally acknowledge. Organizations like VIDA and CWILA, and writers like Roxane Gay and Madeleine Thien, have demonstrated in recent years that writers who are women, or people of colour, are particularly overlooked in reviews and in awards. I believe the reasons for that are multiple – but one of them is surely the strange idea that political concerns should not contaminate aesthetic processes. And more insidiously, that our lived experiences are political to different degrees – as Lucille Clifton observed in an interview: “Why is it that when you say something about yourself, you’re talking about yourself as a human, but when I talk about my life, it’s political?”

There’s no doubt that prizes make a difference to writers – for me, the CBC Poetry Prize provided validation, income, several readings and interviews, and the chance to work on new projects in Banff – it was wonderful.

I suppose that it’s contradictory to say then that it would be good if prizes made less difference to readers – but because of the subjectivity I mentioned, and the limited number of awards, it’s important that our reading is not limited to award-winning books.

And a deeper concern is that awards contribute – not intentionally, but effectively – to the larger capitalist machine that would publish only profitable books in the first place. And that should alarm us all.
Posted by rob mclennan at 8:31 AM
Labels: interview, Oolichan Books, Pat Lowther, Sadiqa de Meijer, The League of Canadian Poets