bp : beginnings collects bpNichol’s early major poetic sequences – including lyric, concrete, and sound – which have been out of print for more than 40 years. Alongside The Captain Poetry Poems (1971, reissued in 2011), the texts collected here now make available Nichol’s long poems leading up [to] the publication of the first two volumes of The Martyrology in 1972. Two parallel sequences to these publications, Monotones (1971) and Scraptures (1965-c. 1972), were eventually folded into The Martyrology Book(s) 7 & (1990), while the text of the sound poem Dada Lama (1968) has never been unavailable, and can currently be found in The Alphabet Game: a bpNichol reader (2007). The sequences collected here represent what Stephen Voyce has recently characterized as “two distinct paths” in Nichol’s early publications: “a lyric mode first anthologized in Raymond Souster’s New Wave Canada: The New Explosion in Canadian Poetry (1966), which earned Nichol early praise among Canada’s literary elite, and the minimalist ‘typewriter concrete’ collected in Konfessions of an Elizabethan Fan Dancer (1967), which aligned Nichol with an international consortium of avant-garde writers at home and abroad” (10). (Stephen Cain, “Introduction”) 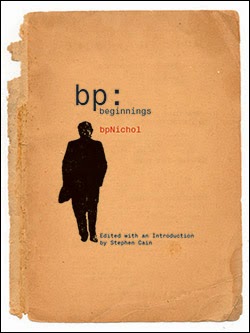 Published in a lovely edition is bpNichol’s bp :beginnings (Toronto ON: BookThug, 2014), edited with an introduction by Stephen Cain. As Cain writes in the introduction, this collection focuses on a number of predominantly pre-The Martyrology publications by the late Toronto poet, fiction writer, critic, sound poet, performer, editor and publisher, all of which existed in small editions throughout the late 1960s and into the 1970s, with the occasional piece first appearing in the 1980s. Cain’s opening introduction is impressive, and nearly worth the price of admission alone (another impressive piece Cain wrote on bpNichol’s work involves the Toronto geography and landscapes of The Martyrology Book 5). For some time now, the difficulty, or at least the problem with discussing the works of bpNichol come from not only the massive volume of his output during his relatively-short life (1944-1988), but the incredible range—from concrete and visual poetry to novels to television work to self-published underground comics to lyric poems, among so many, many other works. For example: bpNichol bibliographer jwcurry once numbered the items in his ongoing “beepliography” as twenty-five thousand items “so far.” Still, so much of the critical conversation around Nichol’s work over the years has focused on the multiple-volume project, The Martyrology. The reasons for such are certainly understandable, given the nature and the scope of the project, called one of the most important Canadian long poems in the second half of the twentieth century, but The Martyrology, as many readers and admirers of Nichol know, is but a fragment of a much larger and longer writing and publishing practice.

this night the sea moves into me

inside me all inside me

the world is given its history

some journey is done
& the ear gathers the words near
to measure what one has won (“a letter in january,” “BEACH HEAD”)

Part of the reason for the exclusions come, one might suspect, simply come from availability. The fact that Coach House Press and later, Coach House Books, have kept volumes of The Martyrology in print is admirable and even incredible to think about, but so many other works simply haven’t had the same kinds of visibility. Thanks to Coach House Books and BookThug, as well as Talonbooks and Black Moss, some of that has been changing over the past few years. Over the past decade, Coach House has produced Zygal (1998), The Alphabet Game, eds. Darren Wershler and Lori Emerson (2007), Konfessions of an Elizabethan Fan Dancer (2004) and a book of variations, ed. Stephen Voyce (collecting the trilogy love, zygal and art facts) (2013), and BookThug produced The Captain Poetry Poems Complete (2011), as well as another bpNichol work this spring, Nichol’s collaboration with Wayne Clifford, THESEUS: A Collaboration (2014). Not that long ago, Windsor’s Black Moss Press even produced a first edition of Nichol’s Organ Music (2012), and Talonbooks produced not one but two expanded editions of Nichol’s work: bpNichol Comics, ed. Carl Peters (2010) and Meanwhile: The Critical Writings of bpNichol, ed. Roy Miki (2010). One would say that this is an enormous amount of work for even a living, active author, let alone for an author who died over twenty-five years ago.

woke up in the morning
nothing in my head

woke up this morning
wishing i was dead

Part of the appeal of this collection is in the faithful reproduction of the original publications, allowing typescript and sketched works to be scanned as opposed to re-set or replicated in a less precise way, adding to the rough elements that would have been evident in the original publications. Although not all typescripts were produced in bp’s own hand, as the original edition of KON 66 & 67 was produced in such an uneven way, that when above/ground press came to reissue the small work in 2002, it was with a typescript re-done by “beepliographer” jwcurry, which is the version reproduced in this collection.  What is also interesting about bp : beginnings is in just how many works within are well-known, yet possibly more known of than actually seen and read. Thanks to Cain and BookThug, readers and scholars might possibly, for the first time, really be able to dig into a period of Nichol’s work that hasn’t really been explored properly. Some of the works reprinted include pieces from (whether whole or in part): Cycles Etc. (Cleveland OH: 7 Flowers Press, 1965), New Wave Canada (ed. Raymond Souster. Toronto ON: Contact Press, 1966), Journeying & the returns (Toronto ON: Coach House Press, 1967), Konfessions of an Elizabethan Fan Dancer (London UK: Writers Forum, 1967), The Year of the Frog (Toronto ON: Ganglia, 1967), Ruth (Toronto ON: Fleye Press, 1967), Ballads of the Restless Are (Sacramento CA: Runcible Spoon, 1968; second “corrected” edition, Ottawa ON CURVD H&Z, 2006), KON 66 & 67 (Toronto: Ganglia, 1968; Ottawa ON: above/ground press, 2002), Lament (Toronto: Ganglia, 1969), Beach Head (Sacramento: Runcible Spoon, 1970) and The Other Side of the Room (Toronto ON: Weed/flower, 1971). The collection of disparate pieces of bpNichol’s earlier works provides an interesting overview, or perhaps even a side-view, of his first decade or so of literary production. One might say this is where everything begins, before opening and even exploding outward into everything else he produced, some decades worth of material over the relatively brief time after he left his twenties. As Cain writes in his introduction:

Still, looking at the ten sequences collected here as a whole, they do appear to reveal the concerns of a young poet under the age of thirty. Recurrent themes include: the inability to communicate, the failure of language, depression and isolation, questions of the purpose of life and mortality, unfulfilled love, travel and exploration, and friendship.