I have not said my prayers. My god is tired and lonely. Dressed to see him, I am lonely too. My brother makes pecan pies and wears a blue hat. In the corner, our mother murmurs the prayer of the 7th horse and rolls a penny along the slanting floor. No one comes to talk with me. That boy snaps his fingers, tap dances to The Night Hank Williams Came to Town. A long time ago, our mother saw a portrait of a woman who reminded her of an orphan, someone she knew and could not save. I have never said enough prayers. My god rolls around in the back of a pickup. Our mother stomps mushrooms with her open hands and they puff out smoke. No one tells me it’s time to eat. (“Bottomland”) 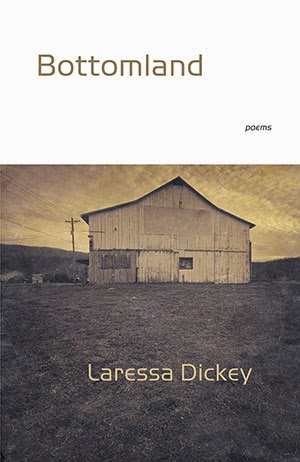 Minnesota “poet, dancer, writing consultant and somatic worker” Laressa Dickey’s first trade poetry collection is Bottomland (Bristol UK: Shearsman, 2014), a book, as the catalogue copy tell us, that “sustains something of the spirit and space of the poem over a longer period of time, and explores the poem as an improvisational space. The poems were born in the deep chill of the Minnesota winter, and they begin out of her experience and memories of growing up on her family’s tobacco farm in Tennessee, but move on to much more.” Dickey’s poems in Bottomland seem geographically fixed under a very large sky, sketched out as postcards from a complex rural expanse, and acknowledge both the lighter and darker aspects of country living, a ravenous intellectual curiosity, and even a kind of charming, self-aware folksiness. As she writes to open the first poem in the final section, “Mimesis, synaptic”: “His mother said he put his ear to the ground when he was scared. I stood across the café from him when this happened. We were lost, but then I crossed the room to put my ear down. It cost fifty cents, but it cost.” Constructed in six extended sequences—“American Rough-Leg,” “Bottomland,” “Catalogue of Utilities,” “A Pictorial History of Wilderness,” “Route to Cloudless, Day” and “Mimesis, synaptic”—the poems in Bottomland are physical, descriptive and restless, and built of lines rushing along in an extended, at times breathless, gallop. “From above, the land only patterns,” she writes, in the poem “Espalier,” the first of the title sequence, continuing: “lines of which connote movement. This does not equal progress.”

Grasslands came before man, coal swamps before reptiles. Avian, then floral. A million years pressed to stone, as lips, as fins. See: fish specialized for life in quiet waters. Some stories are shapes burned together. The tongue a torch on fire, remember it as a planked platform. We bisect the street, slip fingers out of mittens. Tiny photographs of your turning wrist we piece together. Somewhere a shallow field lobbing rockets, agrees with its verb here, to kill, as if. (“American Rough-Leg”)

Bottomland explores an articulation and exploration of personal origins and landscape, the myths and even the dreams of landscape, and does so fixed in a cinematic panorama of homemade pecan pies, magnolia, grandparents, power lines, tobacco leaves and the rushing river. “The distance is inside me and viscous,” she writes, in a section of “American Rough-Leg.” It is as though the poems are not of the geographies she references, but emerge from those geographies, as poems and author, both, unable to completely dislocate from such a strong and rich terrain. In many ways, Bottomland exists as a love letter to those unnamed landscapes and histories, complex and storied throughout, ready to bristle, burn and overwhelm at any moment. In the poem “Devotion,” she writes: “Some people find hope in dreams / live in between small rock crevices. Down // this road, the day sings.” The poem ends with:

What happens when devotion is eclipsed?

What becomes of? The wind in the tin of the tree-top;
photographs pieced together with fingernail polish.

This is what I looked for in the dream and found: small heart

threaded through the place before