Letter to My Long-Lost Brother

Look, we’re both sick of harping about politics.
Your man’s a sweater-vest under a flak jacket,
hiding behind our troops for photo ops.
And you—I know, I know—you disagree:
he’s the great decider, the firm hand.
Let’s talk about someone else. You.
You think this poem is a waste of taxes.
Thank you. You are my older brother and I love you.
There was a time when we argued without our blood
boiling and our fists shaking. Alberta Oilman,
Lumber Baron, Builder of Gleaming Towers,
we had a friend from Montréal who could work
any kind of rig better than the next man.
He hated that he couldn’t smoke at work.
You don’t remember him? He cursed
like a Newfoundland sailor,
but in French—the crews would laugh
their faces off. And did. O black-hearted
redactor, what will we never know? 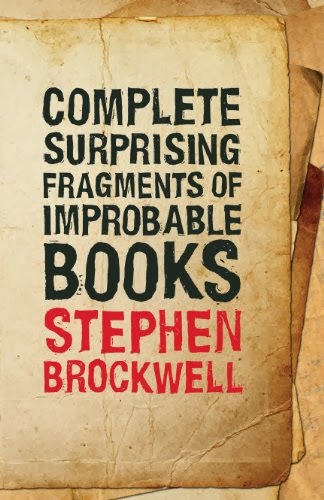 In his fifth trade poetry collection, Complete Surprising Fragments of Improbable Books (Toronto ON: Mansfield Press, 2013), Ottawa poet and editor Stephen Brockwell furthers the explorations of character, distance and voice that he explored in his previous trade collection, The Real Made Up (Toronto ON: ECW Press, 2007). In The Real Made Up [see my review of such here], Brockwell composed a series of poems from interviews, writing out short narratives in the voice of another, including the voice of his fictional Karikura (who also makes the occasional appearance in this new collection). In Complete Surprising Fragments of Improbable Books, he takes the distance one step further, composing poems in another’s voice, each poem claimed to be “found” in some form or another; not even his compositions, but someone else’s. It’s nearly as though Brockwell trusts the sound of his writing more the further it is from his own voice, including the voice of his fictional doppelganger (akin to Stuart Ross’ Razovsky or Erin Moure’s Elisa Sampedrín) Karikura, who appears to either know more than the author (or claim he does), or at least know enough to call the author out on his limitations.

KARIKURA’S MEDITATION ON THE ANT

An ant can haul a leaf
many times its weight,

work hard for nothing
but the queen’s blessing,

survive the free fall from
a skyscraper window,

or—by the pound, pan-fried
with garlic and pepper—

nourish the body
of the wise one who eats it.

For the longest time, this work-in-progress was titled “the Impossible Books project,” and earlier sections have appeared as chapbooks through The Olive Reading Series and Apt. 9 Press (Excerpts from Impossible Books: The Apt. 9 Installment, June 2013), as well as through two separate chapbooks through above/ground press (Impossible Books, the Carleton Installment, August 2010; Excerpts from Impossible Books, the Crawdad Cantos February 2012). Structured in seventeen sections with titles such as “from The Prime Minister’s Nursery Rhymes for Insolent Children,” “A Fragment from Karikura’s Notebook,” “from Cantos of the 1%” and “from The Evangelical Handbook for Engineers,” there is a political awareness and social engagement to Brockwell’s poems that has become more prevalent here, and since the publication of his previous trade title, he even co-edited Rogue Stimulus: the Stephen Harper Anthology for a Prorogued Parliament (Mansfield, 2010) with Stuart Ross, a book that responds exactly to what the title suggests. Brockwell’s poems in this collection don’t simply explore the political and social ideologies that threaten to break systems and people to pieces, but wonder aloud how the chasms between such ideologies have become so very large, and even dangerous. Engaging with an ongoing exploration of voice, science, mathematics and the formal lyric, the poems in this collection also display a degree of humour, the surreal and the fantastic, and a cosmological inquiry that, taken to its logical extreme, could easily prove either the existence of God, the mathematical constraint of the entire universe, or both. Perhaps in this, itself, is the entire question his Complete Surprising Fragments of Improbable Books poses: attempting to explore what might be entirely impossible or even possible, and how slight the differences between them might be. In his charming and funny introduction, “The Home Renovation Theory of Poetry,” he writes through the fantastic and some of these basic questions, allowing himself to be the “straight man” against his more absurd creation, Karikura:

Karikura, who are you, really? Why visit a certified geek, a career software engineer more interested in Gödel than God, more concerned with database queries than epistemological questions? You handed me the fountain pen that dropped on the floor and was kicked under the couch by my scurrying barefoot daughter. If there is a collective unconscious—and please understand the leap that such an idea forces upon me—why not choose a more put-together recipient for your taunts and faux-shaman wisdom? Choose a savant, a young person. Someone with better taste in wine. Anyone. You handed me the damned fountain pen.

There is something about the character Karikura that opens up the seriousness so pervasive throughout Brockwell’s work, providing comic relief as well as providing and allowing questions of alternate perspectives, bringing out that “aha” moment that Don McKay once wrote of as being shared between great poems and great stand-up comedy. In Complete Surprising Fragments of Improbable Books, Brockwell continues to expand a thread that goes back to works such as his Cometology (Toronto ON: ECW Press, 2001), using the space of the poem to help him come to terms with some enormously large questions, increasing in scope and size from his previous works, and fully aware that very few of these questions might actually have concrete answers, fully aware that often it is the questions themselves that are more important.

For Want of a Nail