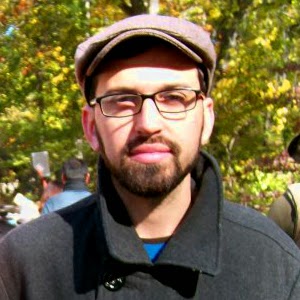 Brian Mihok's work has appeared or is forthcoming in Everyday Genius, Vol. 1 Brooklyn, Hobart, American Short Fiction online and elsewhere. His novel The Quantum Manual of Style was released by Aqueous Books in 2013. He is associate editor for sunnyoutside press and editor of matchbook, a literary journal of indeterminate prose. He also makes videos you can find at brianmihok.com.

1 - How did your first book change your life? How does your most recent work compare to your previous? How does it feel different?
My first book, The Quantum Manual of Style, was just released this year. As far as comparing it to my other work, it's pretty different. I've never quite written a story or book with this much artifice before. I don't know if it's really changed my life, but it's fun to have a book that people can buy and read. It plucks a different chord for my writing life having a book out. I mostly write because I enjoy it, but it's fun to get published and when you have a book come out it feels like a big accomplishment. Most of my other fiction is more story-looking. This book is broken into rules and terms and a story gets woven throughout that form so at first glance it doesn't look like fiction at all.

2 - How did you come to fiction first, as opposed to, say, poetry or non-fiction?
The first thing I remember writing were stories staring Warner Bros. characters, like Wile E. Coyote and Bugs Bunny. So I guess that was fiction. albeit fan fiction, but I was seven so, you know. I did write fiction and poetry as a teenager. I'm not entirely sure why I focused more on fiction as I got older. Probably just because I didn't know enough poetry. At this point I've written and published both fiction and poems, though mostly fiction. I love poetry now that I have read a bunch. I know the difference between the two when I see it mostly, but I don't necessarily go around thinking I AM FICTION, I AM NOT POETRY. I have been writing some creative non-fiction recently, though. That's been pretty fun. I had a piece about Buffalo, NY on American Short Fiction's site not long ago. I'm having another piece  that's kind of like a weird personal essay come out in a magazine here called Block Club. That should be out in January.

3 - How long does it take to start any particular writing project? Does your writing initially come quickly, or is it a slow process? Do first drafts appear looking close to their final shape, or does your work come out of copious notes?
Depends on the project. Since moving from Western Massachusetts to Buffalo I have written a lot, which was mostly due to the fact that I didn't know many people in Buffalo. It allotted me time. I've written drafts of three books in the past four years. Before moving to Buffalo I would have said my writing was a bit slow, but now I think it's kind of fast. I tend to write a draft of a story in just a few days. Then it can take anywhere from a week to years to finish it. I have written stories that really just needed a once or twice over and they were good to go. Others have taken what feels like forever. One story I just finished and will be coming out in Everyday Genius sometime soon, I wrote a couple years ago, but the ending was never right. After rewriting the ending about 30 times I finally found it. I had to put the story down for a bit and then one day randomly opened it up and wrote the right ending. Go figure. So I'd say the final drafts don't really look the same as the roughs, but very very very occasionally I get lucky and put something down that just clicks.

4 - Where does a story usually begin for you? Are you an author of short pieces that end up combining into a larger project, or are you working on a "book" from the very beginning?
Most of the time I think I just write short stories. I don't intend them to get connected and when I have tried to do that it comes out poorly. I wind up sticking so closely to the connections, in order to preserve them, I forget to make the stories good on their own. Making books is hard and confusing and at some point I'm working on something and say, okay this is maybe a book.

5 - Are public readings part of or counter to your creative process? Are you the sort of writer who enjoys doing readings?
I like going to readings and doing readings mostly because of the people I get to meet and see. I'd like to evolve my reading performances to be something better than they are. They aren't really a part of my creative process, but they aren't counter to it either. Mostly I view readings as part of the deal of being a writer because, well, it is.

6 - Do you have any theoretical concerns behind your writing? What kinds of questions are you trying to answer with your work? What do you even think the current questions are?
I don't try to be too theoretical in my stories, and if I do I go over the top like with The Quantum Manual of Style. I don't have that much fun reading theory. Sometimes it's fun but a lot of times it isn't so I don't really want to write stories like that. I definitely am not trying to answer any questions with my work. I'd rather further the question(s) than attempt any answers because what possible answers could I come up with? I don't think art is there for answers. The only answer art has ever given me is to the question of "What do I care most about besides other people?"

7 – What do you see the current role of the writer being in larger culture? Does s/he even have one? What do you think the role of the writer should be?
The writer should be an observer and a creative recorder and a connector. When I read great writing I feel together with humanity. I feel a part of something that matters. There have only been a handful of things that humans have consistently done for thousands of years and literature is one of them. That means literature is doing something that matters to us fundamentally, even when we can't name that thing.

9 - What is the best piece of advice you've heard (not necessarily given to you directly)?
Something specific: write dialog like it is a tennis match between the speakers. What makes tennis fun to witness is the action between the players, the spin on the ball so that each player doesn't know where the ball is going. It's surprising, unexpected. Anything that isn't a part of the match, cut. Fiction is not film. You don't need to read someone say hello when they pick up the phone.

10 - How easy has it been for you to move between genres (fiction to filmmaking)? What do you see as the appeal?
It hasn't been difficult to move between them because to me they are very different things. I don't confuse them, I mean. Fiction can do things film can't and vice versa. I love film. It's as exciting as literature to me. The exciting thing about film is that while literature has been around for a couple thousand years, film has only been around for 100 years. Think of all the innovation in thousands of years of literature. That is what film is just waiting around for. Isn't that exciting?

11 - What kind of writing routine do you tend to keep, or do you even have one? How does a typical day (for you) begin?
This year has been frustratingly busy so my writing routine went out the window, but typically I like to write everyday. The time of day doesn't matter much, but I like to write a page. I feel like if I can sit down and write a page almost everyday I could theoretically write 300+ pages a year. That's good. As far as the day beginning, I'm not good at writing first thing in the morning. My brain doesn't fire on all cylinders early. I wish it did. I wish I could get up at 6am and just get it in and then have the day filled with all the things it gets filled with.

12 - When your writing gets stalled, where do you turn or return for (for lack of a better word) inspiration?
Usually I'll be in a reading mode or a writing mode, but not both. I don't necessarily do a lot of reading while I'm in the writing mode. So if I find that writing is slowing down, it may mean I just need to read some books. Refills the tank.

13 - What fragrance reminds you of home?
The smell of dirt. When I was in middle school my family moved from New Jersey to Florida. One of the biggest differences was the dirt in Florida, or lack of it. Florida is all sand and limestone. When I smell dirt, I think of that time long ago when I longed for the ground beneath my feet to be real dirt and not shifting sand.

14 - David W. McFadden once said that books come from books, but are there any other forms that influence your work, whether nature, music, science or visual art?
Absolutely. Part of the premise for The Quantum Manual of Style came about as the result of my interest in pop science. I love reading about the recent discoveries and edges of knowledge. When those boundaries get shifted. I also play music. I like lots of different kinds of art and it all swirls in my head, interconnected. I get influenced by everything.

16 - What would you like to do that you haven't yet done?
I have yet to go on an extended book tour. That'd be fun.

17 - If you could pick any other occupation to attempt, what would it be? Or, alternately, what do you think you would have ended up doing had you not been a writer?
Awfully tough. I am trying to think back to a point when I would have chosen something else. Can't think of it. If not writing it would have just been some other art.

18 - What made you write, as opposed to doing something else?
It was one of the earliest tools to make art in a way that was fun and exciting. Also I think it's just the art that I am best at.

20 - What are you currently working on?
Just finishing up a short collection of stories called Country of Warehouses. I hope to start a novel soon.