Another Christmas in (old) Glengarry, including Montebello and Ottawa also; 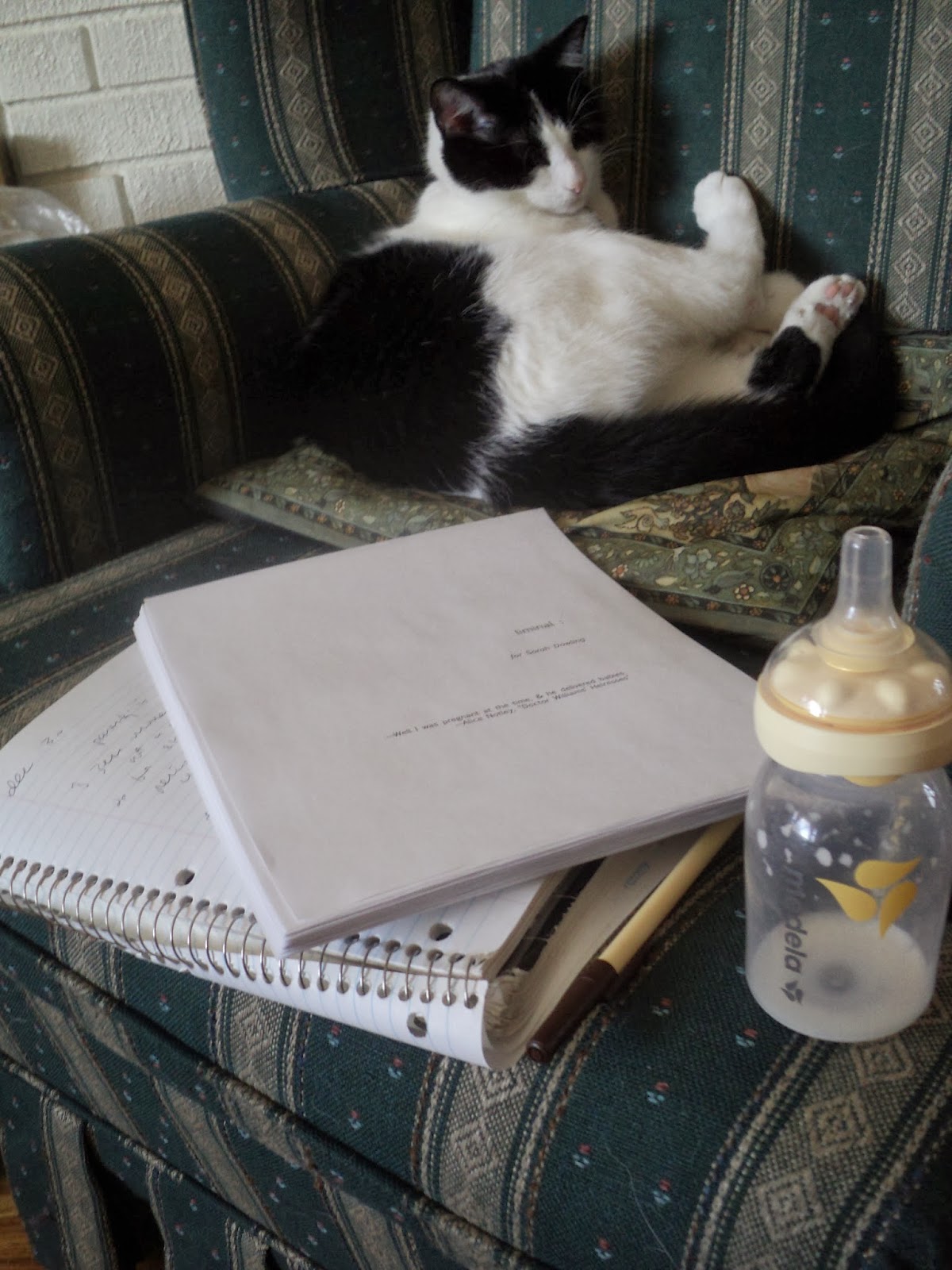 Happy New Year!  Our Rose is six weeks old today. How did we get here? I work hard to get any actual work done, stealing moments between baby, laundry, dishes and other new structures; re-learning how to work, in an entirely new way. I take notes while in rocking chair, feeding baby until she drifts off to sleep.

Apparently when one has a new house and a baby, one is also required to pick up a tree. Who knew? We build our house and we set up a tree inside same. Yes, yes. And we even have a 'baby's first christmas' ornament from 1978, gifted to Christine when she was a wee babe. Is this a tradition we should attempt to continue?

Rose’s first Christmas, which had her various grandparents, cousins and other relatives from there to here all rather excited. Between gifts and our own shopping, Rose had a number of adorable 'first-christmas' outfits, most of which she managed to spit up upon (or do something diaper-related to) before most could see her in such. Sometimes I wonder if this is baby's only option for editorializing. Perhaps.

December 21-2: we braved the stories of oncoming storms and drove the hour-ish to Montebello for a night of Christmas with Christine’s father and brother, and their respective spouses. Month-old babe’s first trip outside of province. Fortunately, for the sake of our drive, at least, the storm kept to the St. Lawrence River and kept clear of the Ottawa. I dread what those in the storm's path have had to endure, some of whom are still in the process of enduring. It harkens back to the infamous ice storm of 1998, when my parents were out of power for three full weeks. We heard sled dogs and saw cross-country skiiers fall over, but most of our trip involved feeding, dinner, awake-baby, sleeping, feeding, breakfast, feeding, asleep-baby and wandering off. Still, everyone thought Rose was remarkably well-behaved (it helped that this is a child-friendly hotel-space, and that she slept through most of the activities, given how young she is). How much damage could a month-old actually do? Well, we did go to bed requiring another hour or so before we managed to convince her of the same. 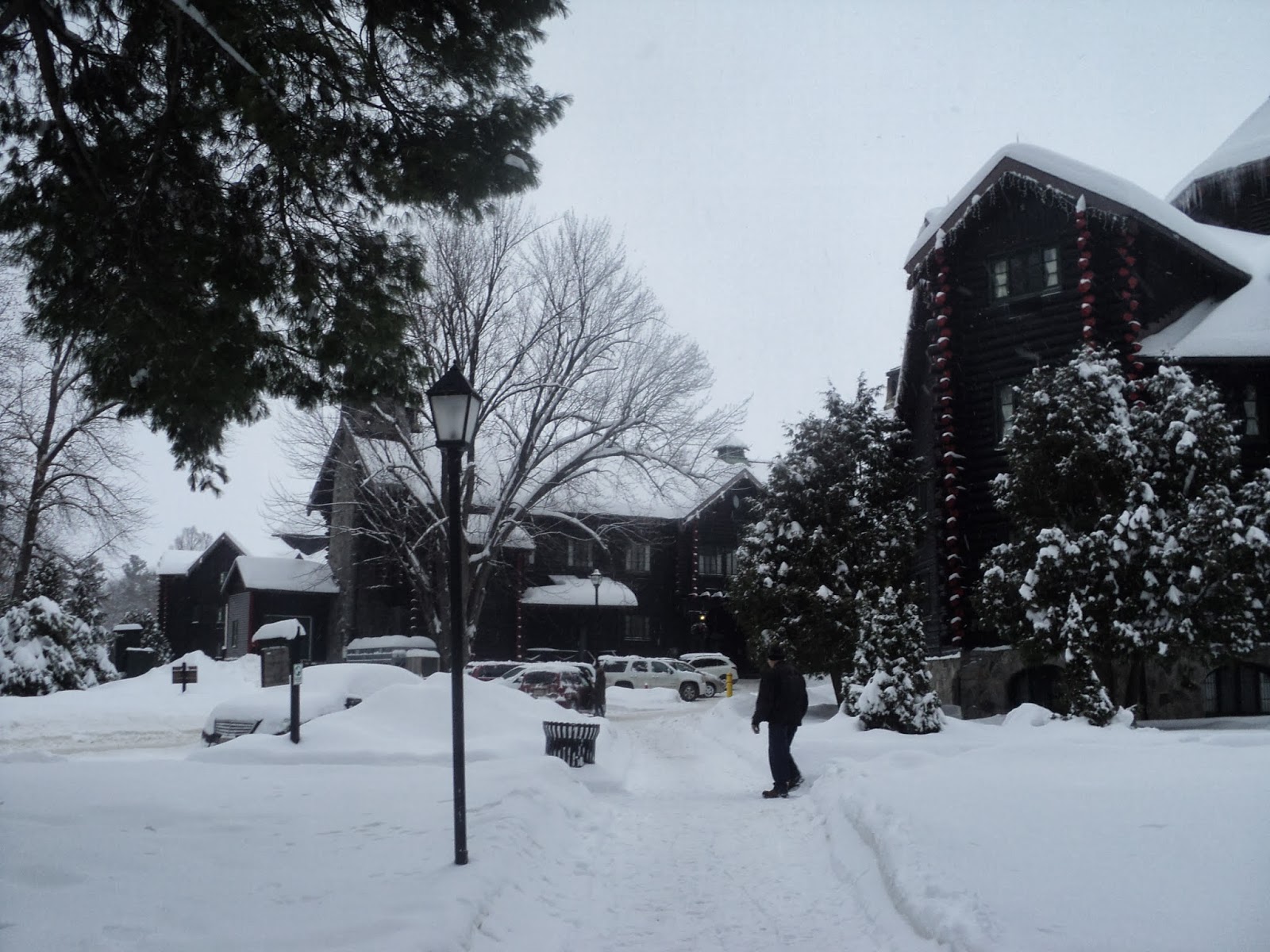 Oh, and because I'd left the lights on in the car the night we arrived, we required a boost for dead-battery the following morning. Given what else was happening around Ontario and Quebec, we were damned lucky with the weather. It was cold, but not horribly cold (even when I stood around for 20 minutes outside to keep the battery alive). Still, the hotel and surrounding space was absolutely gorgeous, and we had some lovely quiet moments with Christine's brother, sister-in-law, father and his wife. Apparently it was decided that this would be our new Christmas tradition with her father, heading off to Montebello for a night, the week prior to Christmas. Hopefully by next year, Rose will be in a better position to get more out of it. Does that mean we might actually have to dogsled? 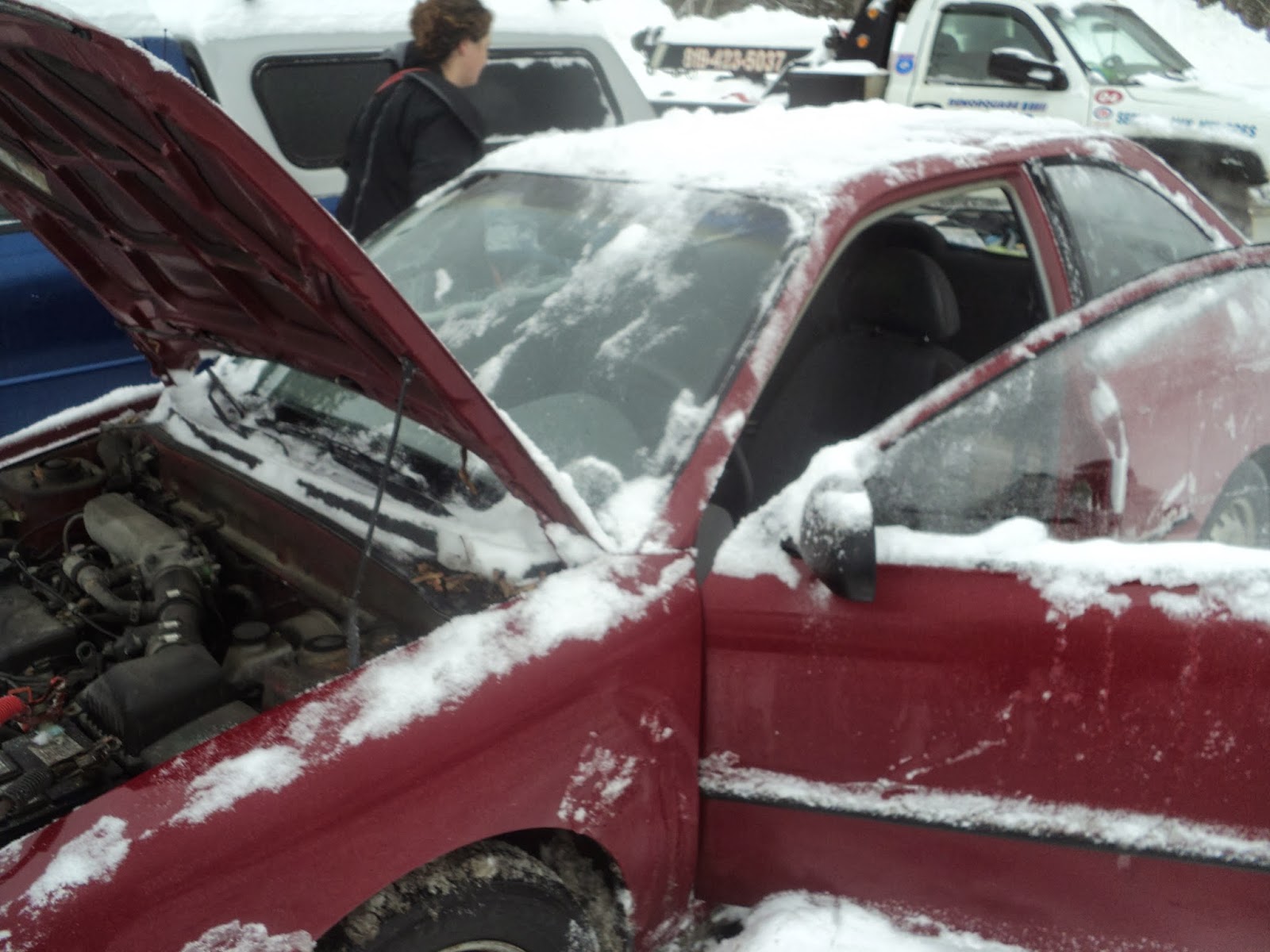 And the buffet was a highlight. Did I mention the buffet? I went for eggs in the morning, and nearly managed everything but. Roast beef, various desserts, shrimp (for breakfast?) and what else. I wanted to sample absolutely everything. Next year.


December 24: Christmas Eve we picked up my daughter Kate from her home in Nepean and drove out to the homestead in Glengarry for a day with my father and my sister and her brood. Throughout the process, I did manage to get a good picture of the collected grandchildren, with baby Rose (five weeks) and my daughter Kate in red cashmere sweater (she turns twenty-three on January 4th); between them, are my sister's brood: Duncan (five), Rory (seven) and Emma (who turned ten the week before Christmas). Emma kept asking Kate (while pointing at Rose), is that your sister? Rose managed to even sleep through the fact that her cousins spent about an hour tearing around the house, wrestling each other. This is a good sign, yes? That she can sleep through loud noises? 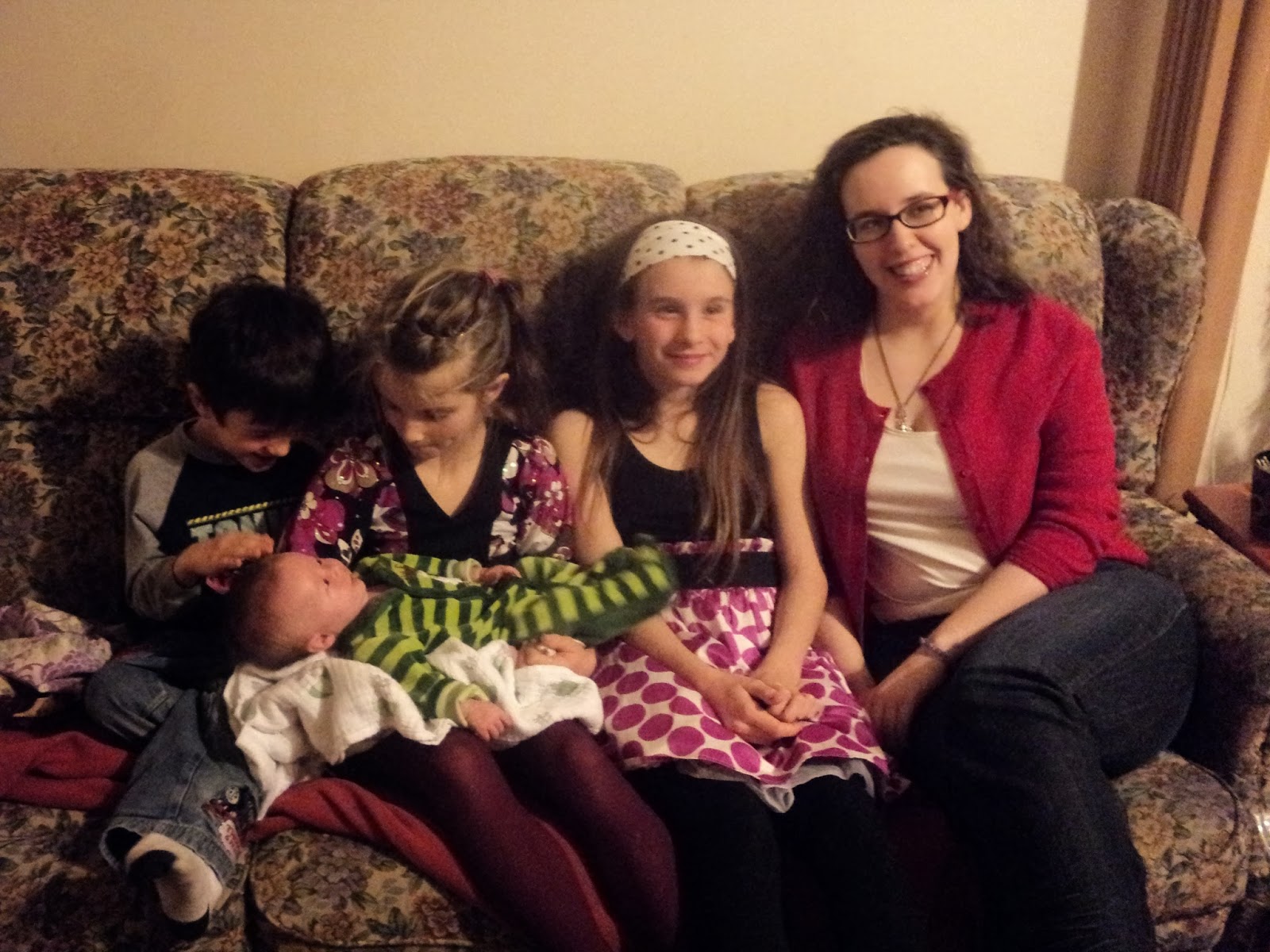 We watched the bluejays and the sparrows and the squirrels on the back porch, fighting their ways through the bird-feeder. A calm quiet throughout. 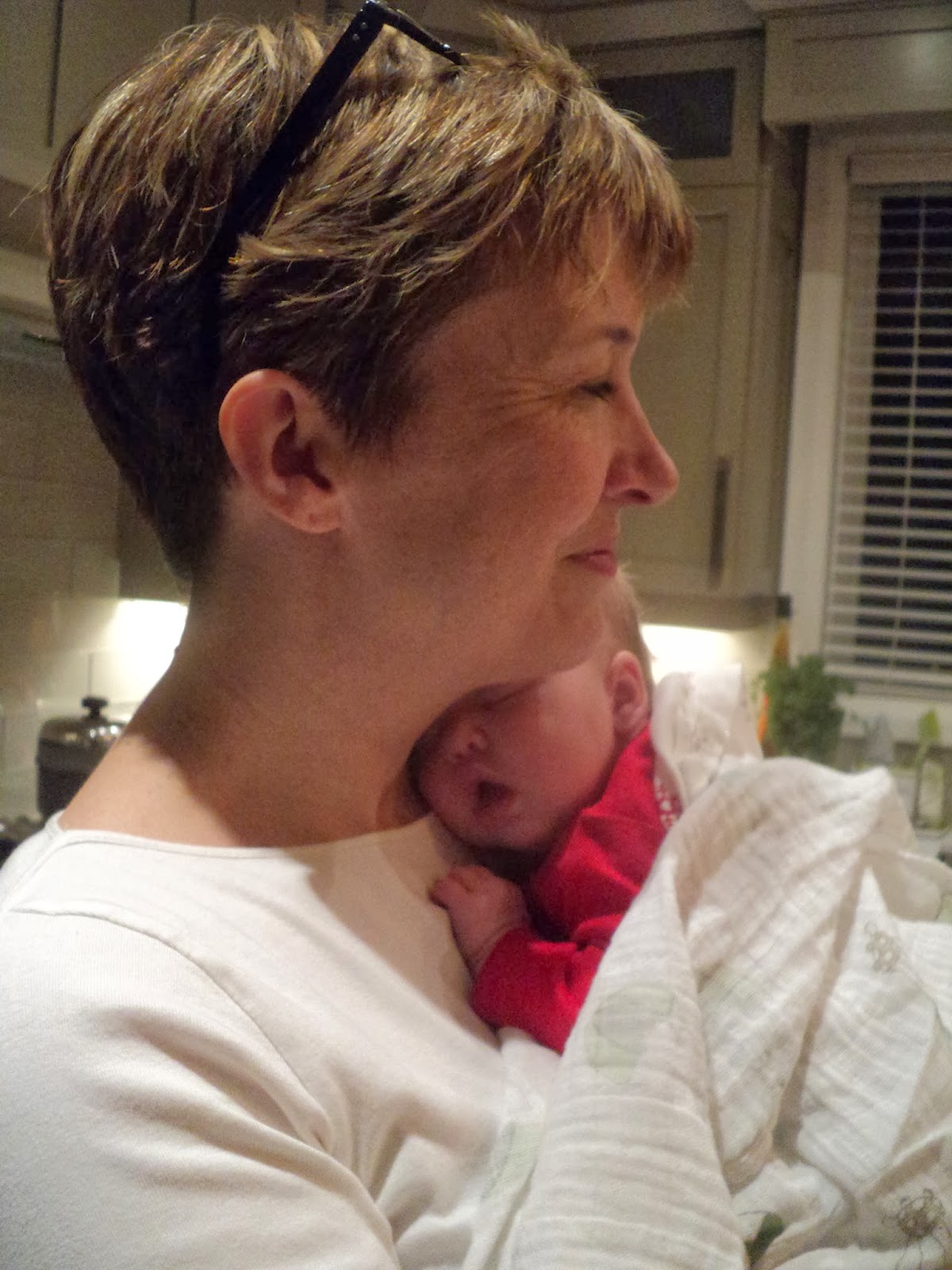 December 25: We left the farm, delivered Kate back home and appeared over to Holland Avenue to Christine's mother's new digs, where her brother Michael and his wife Alexis awaited. Unbeknownst to us, their aunt Trish had flown secretly in from Beijing the night before, to surprise Christine and baby (I suspect she was more here for baby than for anyone). The McNair children apparently hold very tight to their Christmas morning tradition of mimosas and eggs benedict, which I am only beginning to understand the appeal of.

Given that Rose is the first grandchild on this side of the family, there were many photos taken by many people of wee babe, despite the fact that she slept through most if not all of it.

And our Christmas gift from baby Rose: she slept through the night (as much as babies do), from around midnight to 5am. We couldn't have asked for anything better.

December 26: We made it out for an afternoon of early dinner at my aunt Bette's house in Orleans, along with her two children. Bette is widow of my mother's youngest sibling, Bob, whom we all absolutely adored. Kathy was heading over with her carload of family, so we tagged along knowing it would a) force us out of the house, and b) force us to introduce baby to another family member, especially one that has been so generous with baby and pre-baby gifts. Rose wore the party dress Bette had given her, the same one she wore at Montebello, but we were too tired and distracted to be smart enough to have brought any cameras. Despite all the lovely fun we've had, Christmas with a baby is exhausting. Or perhaps, as Christine keeps reminding me, I'm just getting old?
Posted by rob mclennan at 8:31 AM
Labels: Christine McNair, Christmas, Glengarry, Kate Seguin-McLennan, McLennan genealogy, Montebello, Rose McLennan