According to and fittingly – a break
and our pockets fill with flowers to conceal the smell of dying.

Thus concludes the final succumbing to bloody pomander and posy.

The only authentic reference being a ring – a ring of roses
moreover and other than this
covenant
for happiness.

Over the course of three trade poetry collections, Ottawa poet (formerly of Saskatchewan) Sandra Ridley has evolved her poems to encompass a particularly wide canvas. In her third collection, The Counting House (Toronto ON: BookThug, 2013), following her previous two – Fallout (Regina SK: Hagios Press, 2009) [see my review of such here] and Post-Apothecary (Toronto ON: Pedlar Press, 2011) [see my review of such here] – Ridley manages pinpoint minutae of a complex thought, extended and stretched apart to reveal and revel in an incredibly dense gymnastic language on par with contemporary Canadian poets Margaret Christakos, Sylvia Legris and Christine McNair. Through this new collection, Sandra Ridley composes silence, a considered hush, and a tension so taut that it hums.

Falling – not always a dropping to the ground
construed
as rhyme not death
not a literal fall or heartbreak
instead (but)
any other form of respective bending. (“A General Tale”) 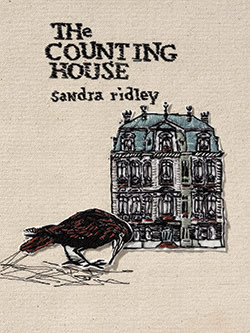 Structured in four poem-sections – “A General Tale,” “Lax Tabulation,” “Testamonium” and “Luxuria” – the second section “was written as an ekphrastic response to michèle provost’s art installation, ABSTrACTS / RéSuMÉS: An Exercise in Poetry, at the Ottawa Art Gallery. Others who responded to her work were jwcurry, John Lavery, Pearl Pirie, Carmel Purkis, and Grant Wilkins. Our material was presented at Ottawa’s artist-run-centre, Saw Gallery, in early 2010, in cooperation with the AB Series.” The poems in this collection explore physical space, constraint, and the space of trauma, nimbly composed within a coiled and considered breath. Ridley is very much a poet working in longer forms, with the book as her unit of composition, and in an interview I recently conducted with her (forthcoming in filling Station magazine), she described some of the book’s construction:

There isn’t much of a landscape in The Counting House and not a strict narrative either. The four serial poems are centred on the lack of information about courtly affection gone awry and about the tallying of the gaps that kind of absence makes. The first section was catalyzed by my reading of interpretations of traditional English rhymes, as found in the Roud Folk Song Index—petty epics of kings, queens and maidens, and the pageantry and pedantry of their unnoble state of affairs.

The remaining three sections are connected in tone. One was written via ekphrasis, with me looking through a bifocal lens of Michel Foucault’s Discipline and Punish and Simone de Beauvoir’s The Second Sex. The second section is a long poem composed in response to michèle provost’s art installation, ABSTrACTS/RéSuMÉS: An Exercise in Poetry, with that lens in front of me.

If there is any thematic continuity following from my first two books, it would come from my obsession with harm—as manifest through seclusion and (re)assertion.

There’s a substantial amount of accusation and denial in the house’s tallying, and as the text moves through time, the tabulation takes different forms. The non-story becomes clearer and more like a reckoning. I was curious about what an accountant’s notebook might look like in poetic form.

Composing and colluding the gradients of pleasure and pain wrapped up in harm, Ridley explores courtly love: “The art of rectifying. Without interruption by the slightest punishment. Or a whole sequence. / Coercions. Verdicts. Confusions.” (“Testamonium”). Exploring facts, exclusions, silences and expectations, the book asks, what does your love do to you, what does it make you become?

When your darling considers it. It she was concerned with it then. Aware of the sundries. Details. Despair become a whole history.

She had a lack of willingness. Insufferable. Her crudest form.

With the same persistence. She cedes to tendency. Falls with a rigorous ferocity.

The Counting House also has one of the finest covers I’ve seen on a poetry book in some time, replicating artwork by Gatineau artist michèle provost. Stitched into three dimensions, provost’s artwork provide a fantastic physicality to the metaphoric house, so deftly constructed through the scope of the poems.

[Sandra Ridley launches The Counting House as part of a BookThug event with Michael Blouin and André Alexis during the ottawa international writers festival at The Manx Pub, October 26, 2013 at 5pm]
Posted by rob mclennan at 8:31 AM
Labels: BookThug, michele prevost, Sandra Ridley, The Ottawa International Writers Festival