12 or 20 (second series) with Juliet Patterson 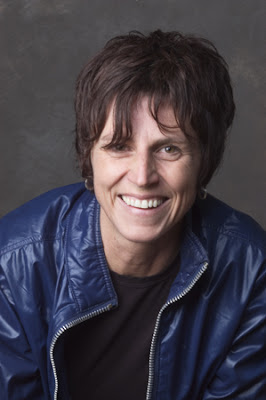 Juliet Patterson is the author of  The Truant Lover, winner of the Nightboat Poetry Prize and Dirge, a chapbook recently published by Albion Books. Her poems and essays have appeared in numerous magazines including 26, American Letters & Commentary, Arts & Letters, Crazyhorse, Indiana Review, Knockout, New Orleans Review, Pebble Lake Review, Rain Taxi, Redivider, Swerve, Water~Stone Review, and Verse. Her recent awards include the 2011 Arts & Letters Susan Atefat Prize in Non-Fiction, 2010 Lynda Hull Memorial Poetry Prize, a 2012 Minnesota Emerging Writer’s Grant, as well as grants from Minnesota State Arts Board and a fellowship from the Minneapolis-based Institute for Community and Cultural Development.

1 - How did your first book change your life? How does your most recent work compare to your previous? How does it feel different?
The main difference is: work. The book enabled me to be hired to teach poetry workshops and creative writing classes at the university level, and also to be more securely employed on a part-time basis as a teacher.

I'd also say that the book has brought me out into the world a little more. I'm a fairly introverted person and need a lot of solitude and time for contemplation. Publishing a book has caused me to travel a bit for readings, workshops, etc. and keep a rather "public" schedule (relative to how I've been living my life). I've met some really amazing people and have had some great experiences seeing different parts of the country. It's been a bit exhausting, but it's changed me in the sense that I have been thinking about how we really are all connected, you know? People, in general, of course, but poets in particular. There are threads made between us that are seemingly invisible, but deeply intricate and beautiful.

My recent work compares little to the first book. At present, I’m working on a prose project. I’ve moved from fragment to sentence. Egads!

I do have a second book of poems circulating. It too, varies from the first book. The poems attempt a more contracted syntax than the first book and tackle (in general) broader subjects.

2 - How did you come to poetry first, as opposed to, say, fiction or non-fiction?
Like so many other writers, I loved language from the beginning. I don’t come from a family of storytellers, nor do I remember (in particular) loving stories as a child. It was language that I loved—the element and texture of words—once I was introduced to poetry (at a young age), a whole world seemed to open up for me. I was already composing poems regularly when I entered 6th grade and then, had a teacher who began class everyday by reciting a poem from memory. These poems were never analyzed or discussed—they were instead a welcome to the day. As my teacher was also an actress, poems became synonymous for me with oral performance and I was mesmerized by the experience.

3 - How long does it take to start any particular writing project? Does your writing initially come quickly, or is it a slow process? Do first drafts appear looking close to their final shape, or does your work come out of copious notes?
Inevitably, each project has its own force of energy and (therefore) timeline. But generally speaking, I’m a rather slow, methodical writer. I make many drafts and (yes) take copious notes and (also, yes) edit rigorously as I compose. From the very beginning of my practice as a poet, I’ve been drawn to extreme brevity—as I draft, I’m trying to find my way to crystalline language—often leading to a long and arduous draft process.

4 - Where does a poem usually begin for you? Are you an author of short pieces that end up combining into a larger project, or are you working on a "book" from the very beginning?
A poem will usually begin for me with an image or a phrase—though it may be accurate to refer to it as a disturbance—something that nags at my psyche, I guess. I am therefore generally, a writer who composes in short pieces. It’s rare for me to begin with an “idea” and/or to have a larger vision for the book, though there’s often a subversive kind of logic at play—an intuition—that often steers the content and somehow mysteriously offers a shape or thematic form to the material. In the process of drafting however, I only pay attention to the structure of individual poems and not the larger whole.

5 - Are public readings part of or counter to  the creative process? Are you the sort of writer who enjoys doing readings?
Stephen Dobyns says, the poet must think of the poem not as a vehicle of self-expression, but communal expression, not of private property, but communal property. He goes on to suggest that when we think of writing this way, poet emerges the servant of the poem. Certainly one way to embody this philosophy is to engage in the oral tradition and in this way, public readings have been and are very important to my creative process—both as participant and audience member.

6 - Do you have any theoretical concerns behind your writing? What kinds of questions are you trying to answer with your work? What do you even think   current questions are?
In general I’d say I’m interested in ideas of consciousness and perception—how do we give language to these things? How do we communicate to another what it’s like to really “see” the world from our own perspective? And perhaps more importantly, what does it mean to have a human consciousness? At a more concrete level, these ideas translate into thinking about the extraordinary and tragic movements of human beings; how we are both ingenious and ignorant, especially when it comes to our relationship with the planet and the environment, which literally (not theoretically) sustains us. At present, I’m also thinking a great deal about time and our relationship to time. As Fanny Howe has written: “Why do we always think history is full of stops and starts? The future is only the past turned around to look at itself.” I’m literally haunted by these sentences.

7 – What do you see the current role of the writer being in larger culture? Does s/he even have one? What do you think the role of the writer should be?
There are many ways writers (and all artists) contribute to the larger culture. First and foremost, may be the service we offer to the awareness of language. At present, the language of the larger culture seems rather impoverished, so I think some of the work writers do—and in particular poets—is to reawaken our bodies and minds to the power of speech. That may seem like a subtle contribution, but I think it has significant power. It’s the idea of “one gesture moves a thousand waves,” and I also like what Scott Russell Sanders suggests—artists, he says, in the larger culture, work at the level of consciousness—the work is slow and mostly invisible (as opposed to activism) but (again) can potentially serve as a catalyst for enormous change.

9 - What is the best piece of advice you've heard (not necessarily given to you directly)?
I love this from Gertrude Stein: “You always have in your writing the resistance outside of you and inside of you, a shadow upon you, and the things which you must express in the beginning of your writing this struggle is so tremendous that the result is ugly—but the essence of that ugliness is the thing which will always make it beautiful. I myself think it is much more interesting when it seems ugly, because in it you see the element of the fight—the vitality of the struggle.” This seems to me also a good process by which to live.

10 - How easy has it been for you to move between genres (poetry to critical prose to collaboration)? What do you see as the appeal?

12 - When your writing gets stalled, where do you turn or return for (for lack of a better word) inspiration?
I find a lot of inspiration in the performing arts; film, dance, theater, music—but of course, I often turn to books and beyond arts—I’m deeply inspired by philosophy, science, literary journalism and long walks in the woods.

15 - What other writers or writings are important for your work, or simply your life outside of your work?
The complete list is truly impossible to make, but a few people who’ve been very important to my poetry include George Oppen, Lorine Niedecker, Gertrude Stein, Robert Creeley and Jean Valentine. In the realm of non-fiction, I’d have to name Terry Tempest Williams, John Berger, Paul Auster, John D’Gata and Elizabeth Kolbert. And a lot of writing outside the realm of literature (philosophy, physics, biology, history) has been deeply important to my work. At present, I’m reading James Hillman’s Suicide and the Soul, which is an amazing psychological and spiritual treatise.

17 - If you could pick any other occupation to attempt, what would it be? Or, alternately, what do you think you would have ended up doing had you not been a writer?
An ornithologist or marine biologist.

20 - What are you currently working on?
I’m currently at work on a non-fiction project. Technically, I guess it’s a memoir, though it also straddles the realm of the essay at present.  I'm writing about my family's original home--Pittsburg, Kansas--and about its history as one of the largest coal mining regions in the country. I'm also writing about the life and death of my father and both my grandfathers--all of whom died by suicide. My maternal grandfather’s family (his father and four brothers) worked throughout their lives in the coal mines. My paternal grandfather served two terms in the U.S. House of Representatives and fought for worker's rights, including those of coal miners. This is an American story that is also emblematic of a piece of history.