The living consent to the living,
and the ability they share.

(The grain is scattered across the woodcuts—

is lying in one direction—
is sanded from the harvest scenes.)

They are chasing the goats

to warm the milk;
they are thinning the pulp for tracing-paper;

and thinking of the places

they have left—the façade work,

of caches in sand,
rising in their absence. 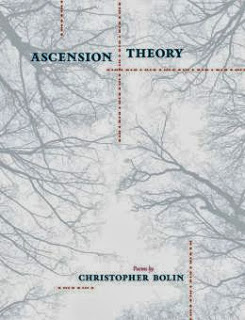 There is an enormous amount of activity in St. Joseph, Minnesota poet Christopher Bolin’s first trade poetry collection, Ascension Theory (Iowa City: University of Iowa Press, 2013). Bolin plays the activities on the immediate surface against the hidden depths, composing a poetry of rough cut glass. His is a poetry that understands conceptual smallness, the open narrative and the meditative leaps akin to the poetry of, say, San Diego poet Rae Armantrout. And, like Armantrout, and poets such as Cole Swensen, Suzanne Buffam and Ken Babstock, Bolin appears to exist within a space that appreciates formal convention against formal invention, belonging to neither camp specifically, but a foot firmly in both.

Ascension Theory writes of isolation, connectiveness and the relation of disconnect. The characters that populate Bolin’s poems are centred and adrift, wandered but not lost, and lost knowing exactly where they are the whole time. As he writes to open the poem “Rites of Spring,” “The fox-scented decoys going unfound in the wind: scattering / the nesting fowl: catching their young // in the illusion;,” ending precisely in the centre, writing: “for he will find you in the clearing, and you will be of little burden.”

Who stenciled “Little Boy”?
I want him

to make the incision.

“Her feeling her heart falling
is part

This
proves strength is not a virtue.

I prefer a taxidermist. Who else
dresses

so many forms with parts?