Rhonda Douglas, How to Love a Lonely Man


Self-Portrait as the One Who Got Away

After, I’m all vowels
agony has sharp elbows (ows, ows)
inhaling grief in the Yaris
all alone.

After a while there are a few things I wish to take back:
first intake of breath that gave me away
collapse into kiss as though kiss was another place
near here, and you had a map.
Take back London, all of Bloomsbury, Wagamama—
kicking you out of the Good Enough Club.  Perhaps.
Take back the sacrifice of small animals for safe flight.
Eliot, Homer, Virgil, all mine again. Maybe.
Take back silences, the drive from Montreal, 417 offering
its asphalt linear hopes: pleasure, pleasure, pothole, home.

Dodged a bullet, friends say. Culpable and just not capable,
your twitching carapace must be crushed.
Asshole. Unworthy. Unimaginable idiot.
They exhaust vowels creating a new you
for me to see. I need new glasses,
can’t quite clear the rearview.

If one wishes to tie Ottawa writer Rhonda Douglas’ trade poetry collection, Some Days I Think I Know Things: The Cassandra Poems (Winnipeg MB: Signature Editions, 2006) to her follow-up, the poetry chapbook (part of a larger work-in-progress) How to Love a Lonely Man (Ottawa ON: Apt. 9 Press, 2013), the theme is rather obvious—one of connections attempted, achieved, failed and finally lost. Given that the narrator of her first trade collection was the legendary Cassandra of Greek mythology, doomed to have her predictions (and those of her descendants) never believed, how distant is that from a contemporary voice that opens Douglas’ poem “One Year Later”:

A list of all the things I still want
to tell you: how Viagra ruins
any sentence it’s in; reading Dante
again, I’ve allocated a new circle for strip malls,
another where everyone’s giving a keynote address. 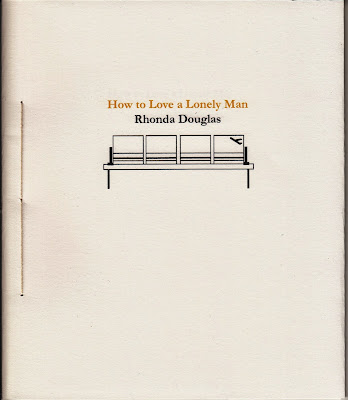 The eleven short narratives that make up How to Love a Lonely Man exist less as a manual than a series of warnings, such as in the title poem, that includes: “Stroke / the greying temples of the head on your lap, don’t say / Christmas, don’t imply there are weeks to come.” Another poem, “How to Love an Anxious Man” includes: “The tick of his heart to not sure, not sure. / After sex, he’s twitchy, some country music / star’s cousin.” There are some deep hopes, bad fortune and ill-fated choices within the lines of these poems, and hers is a narrator that wishes for something that even she knows is not nearly enough. It’s as though her narrator exists in a kind of Victorian longing: a blend of pessimism, romantic ideals and pragmatism. A recent episode of CSI: Crime Scene Investigation included one of the main characters discussing marriage, how you shouldn’t marry the person you can live with, but the person you can’t live without.

Given that Douglas has been working the past couple of years to complete a manuscript of short fiction, I’m curious to see how close the narrators of these two works are in tone, writing from the perspective of being so close to something that remains impossible, and entirely out of reach. It suggests that Douglas favours the voice of the voiceless: those who haven’t had much of a voice, she who spent her time not being considered, offered, or listened to at all. Throughout the small collection, there are parts of the chapbook that are quite striking, and other parts that feel a bit too loose and conversational, which might entirely be an argument of style. Her narrator expresses disappointment, grief and even rage, and hopefully manages to put the whole sordid business behind her. In the final poem in the collection, “A Few Uses for It When It’s Done,” she ends with:

Write it off, that boy you used to know, used to love, used to
pardon my Biblical reference. This is the art of lost and found.