The quintessential poet’s micro-press, above/ground press — founded and published by poet, writer, and editor rob mclennan out of Ottawa, Ontario — publishes chapbooks by both newly emerging and established poets alike. What makes above/ground press titles stand apart from other micro-press poetry chapbooks (besides their nondescript covers, that is) is that they offer the reader glimpses into collaborations as well as individual works in progress. It’s these glimpses which above/ground gives that makes their titles unique, revealing the process of the poet’s composition, their collaborations, as each waltz’s their muse along the thin razor’s edge of creation. […] It takes guts to write without a net, and particularly to publish those early efforts for all to see. Guts, indeed
Mark McCawley, Fresh Raw Cuts

Ottawa’s above/ground press, a one-man operation run by writer, editor, publisher and critic rob mclennan, celebrates nineteen years of publishing in August with a reading and launch party at The Mercury Lounge with four readings/launches.

With readings and launches by:

Amanda Earl (Ottawa ON),
launching Sex First & Then A Sandwich

and Stephen Brockwell (Ottawa ON),
launching Excerpts from Impossible Books, The Crawdad Cantos 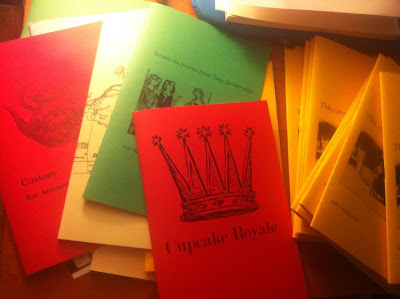 Part of the aesthetic of above/ground press [photograph by Deborah Poe] has closely followed mclennan’s own interest in encouraging and showcasing a combination of emerging and local Ottawa poets alongside more established writers from across Canada, the United States and beyond, and in introducing new writers to the local community. Through over six hundred and fifty publications so far, the press has been fortunate to be able to be part of a number of early publications by now-established writers, including Stephanie Bolster, Gil McElroy, Stan Rogal, Natalee Caple, Stephen Brockwell, Michael Holmes, Clare Latremouille, derek beaulieu, Pearl Pirie, Jay MillAr, Marcus McCann and Anita Dolman.

Cameron Anstee lives and writes in Ottawa ON where he runs Apt. 9 Press and is pursuing a PhD in English Literature at the University of Ottawa. Recent chapbooks have been published by above/ground press, The Emergency Response Unit, and St. Andrew Books. He blogs on things Ottawa, literary, and ephemeral at cameronanstee.wordpress.com.

“Cameron Anstee’s serial poem Frank St. (March 2010, $4.00) is a study of house, history (‘in 1878 this address / was at the city limit’), art and self. He moves through his new/old home precisely but gently, instructing himself and us how to relax, ‘learn to stop,’ in order to then ‘see better, poem.’”
Allan Brown, Jones Av.

This is Anstee’s second above/ground press title, after the collection Frank St. (2010).

Marilyn Irwin partook in two of Ottawa poet rob mclennan’s poetry workshops in 2010, and graduated from Algonquin College’s Creative Writing Certificate Program this Spring. Marilyn self-published her first chapbook for when you pick daisies (2010) which was immediately re-issued by above/ground press. Extrapolated fragments of her musings can be found in issues of Bywords, Bywords Quarterly Journal, ottawater and Peter F. Yacht Club.

Praise for for when you pick daisies:

This is Irwin’s second above/ground press title, after the collection for when you pick daisies (2010).

Amanda Earl’s poems appear most recently or are forthcoming in the Puritan, fillingStation, Rampike, In/Words Magazine, & ripple(s): a postcard press. Her chapbooks have been published by above/ground press, BookThug, Chapbook Publisher, Free Poetry For, Laurel Reed Books & Puddles of Sky Press. Amanda is the managing editor of Bywords.ca & the Bywords Quarterly Journal, & the (fallen) angel of AngelHousePress. For more information please visit www.amandaearl.com or follow her on Twitter @KikiFolle.

This is Earl’s third above/ground press title, after Eleanor (2007) and The Sad Phoenician’s Other Woman (2008).

Stephen Brockwell is the author of four trade collections of poems. Fruitfly Geographic won the 2004 Archibald Lampman Award for the best book of poetry by an Ottawa writer. His Excerpts from Impossible Books is an interminable work in progress. Brockwell runs the small business www.brockwellit.com from his basement, borrowed office space and coffee shops.

Praise for Excerpts from Impossible Books: The Crawdad Cantos:

“Stephen Brockwell’s ‘Impossible Books project’ (this above/ground book is its second installment) is an ongoing series of individual poems that are presented as excerpts from imagined ‘impossible’ books. The impossible books of this installment range from Prime Minister’s Nursery Rhymes for Insolent Children, to the Evangelical Handbook for Engineers, to Metonymies: Poems by Objects Owned by Illustrious People, and Pindaric Odes to the Objects of Science, among others. This brief collection of ten poems is imaginative and surprising on every page.
Cameron Anstee, ottawa poetry newsletter

For further information on the authors and/or event (with a whole ton of links), check the link here.
Posted by rob mclennan at 9:01 AM
Labels: above/ground press, Amanda Earl, anniversary, Cameron Anstee, Marilyn Irwin, Stephen Brockwell, The Factory Reading Series, The Mercury Lounge