Why Be Happy When You Could Be Normal? Jeanette Winterson


The more I read the more I fought against the assumption that literature is for the minority – of a particular education or class. Books were my birthright too. I will not forget my excitement at discovering that the earliest recorded poem in the English language was composed by a herdsman in Whitby around AD 680 (‘Caedmon’s Hymn’) when St Hilda was the abbess of Whitby Abbey.
Imagine it…a woman in charge and an illiterate cowhand making a poem of such beauty that educated monks wrote it down and told it to visitors and pilgrims.
It is a lovely story – Caedmon would rather be with the cows than with people, and he doesn’t know any poetry or songs, and so at the end of the feasts in the abbey, when all are invited to sing or recite, Caedmon always rushes back to the cows where he can be on his own. But that night, an angel comes and tells him to sing – if he can sing to the cows, he can sing to the angel. Caedmon says sadly that he doesn’t know any songs, but the angel tells him to sing one anyway – about the creation of the world. And Caedmon opens his mouth and there is the song. (Have a look at an early account of this in Bede: History of the English Church and Peoples.) 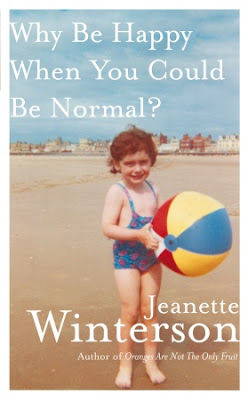 For years now, one of my favourite fiction writers has been British writer Jeanette Winterson, author of the infamous first novel, Oranges Are Not The Only Fruit (1985) and subsequent Written on the Body (1993). Of her books, some of my favourites include more recent works, such as Lighthousekeeping (2004) and Weight (2005). I was less taken with The Stone Gods (2007), despite enjoying some passages, and even enjoying the connections to one of her earlier works, Boating for Beginners (1985) (which is a very neat book to compare to, say, Timothy Findley’s Not Wanted on the Voyage). After numerous works of fiction, as well as children’s books and screenplays, comes a memoir of growing up, Why Be Happy When You Could Be Normal? (Knopf, 2011). Named for a phrase her adoptive mother, a Pentacostal, said to her, this is an odd, unsettling and frank memoir. Through the memoir, Winterson attempts to come to terms with the brutal way she was treated by her parents, including being shunned for her sexuality, diminished for being adopted, having her books burned, and regularly being locked out of the house. She writes of working to come to terms with her parents, and even her birth mother, once she is finally able to begin the emotionally and bureaucratically difficult process of seeking her out. She writes of her adoptive mother’s faith warped into madness, and the abilities she developed early on to protect herself, from secretly reading books from the library, to her first romantic stirrings. How does one learn to develop after such deep betrayals from not only one mother, but seemingly two? The first betrayal is the hardest to fathom, and the most difficult to transcend, especially from that person to whom our first bonds are forged.

Flash forward to 2007 and I have done nothing about finding my past. It isn’t ‘my past’, is it? I have written over it. I have recorded on top of it. I have repainted it. Life is layers, fluid, unfixed, fragments. I never could write a story with a beginning, a middle and an end in the usual way because it felt untrue to me. That is why I write as I do and how I write as I do. It isn’t a method; it’s me.
I was writing a novel called The Stone Gods. It is set in the future, though the second section is set in the past. It imagines our world in its protean state being discovered by an advanced but destructive civilisation whose own planet is dying. A mission is sent to Planet Blue. The mission does not return.
Whenever I write a book, one sentence forms in my mind, like a sandbar above the waterline. They are like the texts written up on the walls when we all lived at 200 Water Street; exhortations, maxims, lighthouse signals flashed out as memory and warning.
The Passion: ‘I’m telling you stories. Trust me.’
Written on the Body: ‘Why is the measure of love loss?’
The PowerBook: ‘To avoid discovery I stay on the run. To discover things for myself, I stay on the run.’
Weight: ‘The free man never thinks of escape.’
The Stone Gods: ‘Everything is imprinted forever with what it once was.’
In my previous novel, Lighthousekeeping, I had been working with the idea of a fossil record. Now I was there again – the sense of something written over, yes, but still distinct. The colours and forms revealed under ultraviolet light. The ghost in the machine that breaks through into the new recording.
What was the ‘imprint’?

Winterson writes of her difficulties with her mother, and the loss she felt at being adopted, raised in a working-class industrial town would be able to escape at all, let alone through the salve of reading that turned into writing, and forced to leave home at sixteen because she was in love with a woman. What else to say? This is a striking, and brutally honest work that struck deep, even as I work on my own work-in-progress dealing with my own mother [see a link to such here]. When I originally read an excerpt of the book in The Guardian, I was struck by this passage:

Now that I’ve gone through the book as a whole, another passage strikes, also:

But mother is our first love affair. Her arms. Her eyes. Her breast. Her body.
And if we hate her later, we take that rage with us into other lovers. And if we lose her, where do we find her again?