The reading I did at 17 Poets, New Orleans LA now posted on-line, 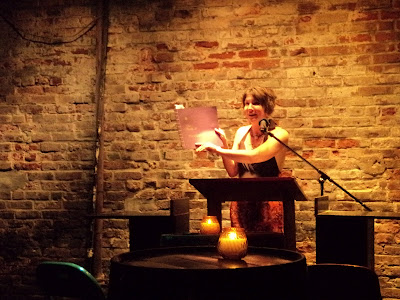 On Thursday, May 10, 2012, Stephen Brockwell and I read as part of 17 Poets, a reading series the husband and wife team of Megan Burns and Dave Brinks run in New Orleans at the Gold Mine Saloon. Who wouldn’t want to read at a saloon in the middle of the French Quarter? This was actually the second trip Brockwell and I had made to New Orleans, after a reading we did in February in Lafayette, and we’ve been scheming to get down there even further, with this trip including our partners, Christine McNair and Gwendolyn Guth. Might we be able to get readings for them at some point, also?

A magnificent event, we were joined by a local, the poet Laura Mattingly, launching a new book at the event, her The Book of Incorporation (New Orleans LA: Language Foundry, 2012). The book was produced in an edition of fifty, with letterpress covers by J.S. Makkos. Her reading, the first of our three, is posted here.

Her long sequence of poems, she writes, “were inspired by a close reading of the 1960 Oxford University Press edition of The Tibetan Book of the Dead or The After-Death Experiences on the Bardo Plane, according to Lama Kazi Dawa-Samdup’s English Rendering compiled and edited by W.Y. Evans-Wentz.”

XIV. A MOTHER IS APPROACHED BY A SEER AT HER PLACE OF EMPLOYMENT

MY GAZE RESTS in her oddly shaped breast bone, as if her heart were a bowl to fill

Thank you—I found it in a trash can

Are you accustomed to people telling you strange things?

He is a young man, which is unique. Maybe early thirties. Most of the people who talk to me are very old. But this man is young. He is happy for you. He thinks the baby will be a girl.

No, but occasionally they carry whole peacock feathers next door

That’s not the variety of feather I’m looking for, but thank you

from Cantos of the 1%

Maples in Oak Park Illinois: their keys spin
like the finger of a girl obsessively twirling a strand
of brown hair while reading a hardbound book
or watching cartoons on the tube.

Wisconsin venison tastes as good as it sounds:
fattened with grain, it lacks that gamey tang
but butters the teeth with blood, pepper and marsala wine.
If this country stopped coddling its youth like meat

how happy the world would be: the lovely
babies laughing in Kirkuk, the Roma

dancing in Prague, the Innu throat-singing
in Madison, the Sunni spinning in Trieste.

Garcon, Peter, you fled Krakov for Chicago.
What broken man or woman did you abandon via Paris
for this nation of occasional courtesy, fine wines,
V8 boneyards and ambitious health insurance saleswomen? 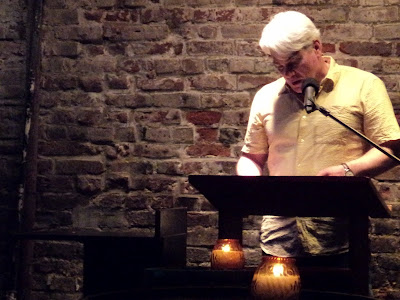 I read a lengthy prose-poem work, titled “Texture: Louisiana,” the result of an American trip with Stephen Brockwell, February 22-25, 2012. During that time, we were in and around New Orleans and Lafayette, Louisiana, in part for a reading we did together at the University of Louisiana at Lafayette on February 24, 2012, organized and hosted by poet Marthe Reed. This piece is dedicated to both Brockwell and Reed, with many thanks, and gratitude to Camille Martin and Megan Burns for generous feedback. The poem is part of a larger manuscript-in-progress, titled “How the alphabet was made,” a work constructed out of a small selection of sections, each working different aspects of the prose and lyric sentence.

I’ve been interested more over the past couple of years in the prose poem, finally setting some attention aside about eighteen months ago to begin a proper exploration of the form, as author, reader and researcher. The American prose poem has some interesting directions, many of which I don’t see in the Canadian form, which appears to have an entirely different history, one I am slowly attempting to map out. I suspect much of the Canadian form comes more from French sources, both European and Canadian, than the American, thusly accounting for the increased lyric abstract quality our versions have, as opposed to the Russell Edson short story-esqe narratives of the American. But who can say? I am still working the archaeology of the Canadian form.

My reading exists entirely on YouTube now, thanks to Megan Burns. My poem “Texture: Louisiana” (unpublished, as of yet) begins:

Confess our sins. We strive, to ash.

Arrive in New Orleans. They hose down streets and other surfaces, the clear. The following morning, everyone repaints. The hotel lobby, bars along Bourbon Street.

The grease from poles, to keep the crowds from climbing. Straddled, this long-distance horse.

In a second hand bookstore, a poetry collection by Norma Cole, inscribed to Andrei Codrescu. Apparently he had too many books.

Confess our sins. The riverboat wash.

A bastion of French, both language, culture. Cajon, Creole, Acadian.

I am translucent skin.

The Battle of Vermilion Bayou, April 17, 1863. Third in a series running between Union Major General Nathaniel Prentice Banks and Confederate Major General Richard Taylor. What had we to say.

Am a tourist through these pages. I have no right.

Birds could never fly this high. Capital to capital.

Drop down in New Orleans. We flood, we persevere. We drown.

Already scattered notes have formed for an accidental follow-up piece, “The Fall of New Orleans,” subtitled “[some field notes],” extending the “How the alphabet was made,” manuscript.

One part of the evening that was entirely cool was the fact that Christine McNair and new New Orleans resident Lisa Pasold both participated in the open set, and both with new books. Pasold read from her third poetry collection, Any Bright Horse (Frontenac House, 2012), which she will be touring later this fall across Canada, and Christine did the first reading from her first trade poetry collection, Conflict (BookThug, 2012), which officially launches for the first time at the big BookThug event in Toronto on May 22, 2012.

Now the only question is, how do we all get back down there?
Posted by rob mclennan at 9:01 AM
Labels: 17 Poets, above/ground press, BookThug, Christine McNair, Dave Brinks, Gwendolyn Guth, Language Foundry, Laura Mattingly, Lisa Pasold, Megan Burns, reading, rob mclennan, Stephen Brockwell