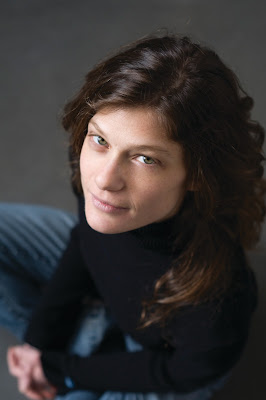 Marianne Apostolides [photo credit: Jorjas Photography] is the author of four books, including Voluptuous Pleasure: The Truth about the Writing Life (BookThug, 2012), and the novels Swim (BookThug, 2009) and The Lucky Child (Mansfield Press, 2010). Apostolides is a recipient of the 2011 Chalmers Arts Fellowship.

1 - How did you come to non-fiction first, as opposed to, say, fiction or poetry?
I’m the daughter of an immigrant; to me, writing was legitimate only when it was practical.  The notion of using narrative to explore the human condition would never have occurred to me!

I thought I would become a journalist, until I got my first book deal at age twenty-two.  But that book didn’t concern itself with language and narrative; it is, in all honesty, a self-help book about eating disorders.  I stand by it (I periodically get Facebook messages from people who were profoundly affected by that book), but it certainly wasn’t literature….

I knew I wanted my next project to explore my father’s childhood during WWII and the Greek Civil War.  I thought I would, once again, write a simply structured narrative account of a life and its sufferings.  This is what I initially tried to do.  But, as I mention in one of the pieces in Voluptuous Pleasure, I failed.  Not once, but continually.  For ten years, I grappled with the material of my father’s childhood, attempting to forge — from my father’s life — a compelling story.  Only through that ten-year process of failure and persistence did I come to understand the brutality and seduction of language.  From there, other genres became available to me.

2 - Where does a book usually begin for you? Are you an author of short pieces that end up combining into a larger project, or are you working on a "book" from the very beginning?
Every book is different.  With Swim, I had a setting (a pool fed by natural springs in a mountain village in Greece) and a situation (the moment when a mother and daughter are both sexual beings).  From there, the book became something I couldn’t have predicted.

As for Voluptuous Pleasure: I didn’t intend to write a collection of stories.  Instead, I wrote several pieces when the manuscript about my dad (later published as The Lucky Child), completely collapsed.  The manuscript collapsed, my marriage collapsed, I collapsed.  I pulled myself together by writing these stories.  I knew I couldn’t take on another full-length work; I needed to build my skills as a writer.  I could do that with shorter pieces, which I could hold and control (and allow myself to lose control?) more completely.  My novel Swim began as a short story at this time; I set aside Voluptuous Pleasure to devote myself fully to that work.

3 - How does your most recent work compare to your previous? How does it feel different?
As I mentioned above, Voluptuous Pleasure arose from the ashes of a failed manuscript!  Three of the nine pieces in Voluptuous Pleasure concern Greece; they are positioned as the fist, last, and middle stories, forming the structural and thematic backbone of the book.  The other pieces range across all sorts of subject matter — desire, motherhood, marriage, loss — but all of them examine the notion of narrative truth.

In a broader sense, each of my books arises and assumes its stance in contrast to the one before; I guess you could say the entire body of my work is a dialectic, with each piece asserting its identity in communication with its predecessors.

4 - How long does it take to start any particular writing project? Does your writing initially come quickly, or is it a slow process? Do first drafts appear looking close to their final shape, or does your work come out of copious notes?
Starting is easy.  I tend to write in a mad flurry, generating tens of thousands of words in a few weeks.  But, as you’ll see from Swim and Voluptuous Pleasure, my final books are quite brief!  Writing, for me, is rewriting.  And I am ruthless in my edits.

As for notes and outlines: no, I don’t tend to work that way.  I’ll write a portion, then I’ll “take a meta”: i.e., I’ll make an assessment of the work, in which I create a rational outline what I’ve got.  From that outline, I can identify where the narrative falls apart, where I want to go, and how I might get there.  Then I’ll write/edit and do an assessment again (and again and (maybe) again and again) until I’m ready to move forward.

5 - Are public readings part of or counter to your creative process? Are you the sort of writer who enjoys doing readings?
I really enjoy the occasional reading.  But I feel exposed and deflated if I read too soon, or too frequently.

6 - Do you have any theoretical concerns behind your writing? What kinds of questions are you trying to answer with your work? What do you even think the current questions are?
Theory informs all my current work.  I’m especially interested in a theory called ‘posthumanism,’ which is an ugly term for an expansive theory about what it means to be human in our current era.

Our moment is one of transition, I think.  Postmodernism no longer addresses our situation.  It was a powerful movement/moment in the aftermath of the ‘Death of God’ — the realization that ‘man’ no longer stood above all beasts, graced by God by his enlightened mind.  But postmodernism has pixellated into an ineffective lack of substance, almost mocking itself.  I think our era calls for a different contemplation of humanity, civilization, the divine.  This contemplation will bring us back to the body, the terror of true beauty.  This is what posthumanism does, I think.  This is what I’m interested in exploring through my writing.

7 – What do you see the current role of the writer being in larger culture? Does s/he even have one? What do you think the role of the writer should be?
I can’t speak to that, since I’m not sure who anoints a person a ‘Writer’ in the larger culture!  I can only speak to my own role, as a writer who isn’t widely known: I see my role as honouring my finite existence by committing myself to the act of seeking meaning through language.

8 - Do you find the process of working with an outside editor difficult or essential (or both)?
I greatly appreciate all the feedback I receive from editors.  But I tend to be my harshest critic….

9 - What is the best piece of advice you've heard (not necessarily given to you directly)?
“Relax.”  (I’ve not quite mastered that one.)

10 - How easy has it been for you to move between genres (fiction to non-fiction)? What do you see as the appeal?
Readers respond differently to writing, depending on its stated genre.  I like to manipulate that response, where appropriate, in the shaping of a story.

I will add, though, that I find the constraints of non-fiction to be reassuring.  The process of writing my forthcoming novel was the darkest literary experience I’ve ever had.  I often felt the endeavour was deeply purposeless; I’ve never felt that level of despair when writing non-fiction.

11 - What kind of writing routine do you tend to keep, or do you even have one? How does a typical day (for you) begin?
I’m at my desk at 5:30AM every day, seven days a week.  A writing session can last anywhere from 2-5 hours.  My afternoons are less regimented, but the morning writing is sacred.

12 - When your writing gets stalled, where do you turn or return for (for lack of a better word) inspiration?
I walk in High Park, I go to art galleries, I hug my kids.

13 - What fragrance reminds you of home?
The perfume Fracas, which my mother wore when I was a child.  (I guess that means that my mother equals ‘home’ for me…?)

14 - David W. McFadden once said that books come from books, but are there any other forms that influence your work, whether nature, music, science or visual art?
Writing — especially philosophy — is definitely my greatest influence.  But I also maintain a strict physical practice (for a while it was aikido, until I got injured; now it’s yoga).  My thoughts are twinned in the body; often I understand philosophy through a physical experience of struggle or grace.  This experience is organized and clarified through a practice like yoga.

15 - What other writers or writings are important for your work, or simply your life outside of your work?
Oh, there are so many…!  I think the people who have most shaped my capacity to think (and therefore to write) are Nietzsche, Socrates (via Plato), and the pre-Socratics, especially Empedocles, Heraclitus, and Pythagoras.

16 - What would you like to do that you haven't yet done?
Forge a successful marriage.

17 - If you could pick any other occupation to attempt, what would it be? Or, alternately, what do you think you would have ended up doing had you not been a writer?
After a spate of recent grant rejections, I downloaded applications for law school, thinking I might become a law professor.  But I’m old enough to know that I’m most in my strength and my fear when I write.  If I gave it up, I would be committing myself to an empty, awful sadness.

18 - What made you write, as opposed to doing something else?
I didn’t intend to become a writer; I started writing my first book from sheer physical need.  I was bulimic at the time; the writing was cathartic.  It didn’t magically ‘cure’ me of my eating disorder (…people ask that all the time…), but it did allow me to imagine that I might build a life as a writer.

20 - What are you currently working on?
I’m currently doing research for my next project, which will explore posthumanism, probably by looking back to the pre-Socratics. I’ve also got a novel coming out in 2013 with BookThug.  That one, entitled What Comes Into Being, follows the potent relationship between a mother and her son, seeking to explore impulse and desire in a digital age.