Natalie Zina Walschots, the National Post and The Vida Scale: some notes in response,

Over the past few months, there has been a lot of discussion around reviewing, including a recent post by Natalie Zina Walschots (which is a must-read) on the strange and troubling discrepancy in Canadian poetry titles reviewed by women against those by men. I completely agree that there is a different consideration to be put in place when talking of someone who posts reviews to their own site against someone who reviews regularly for a national newspaper, which means that for Toronto writer Michael Lista, who Walschots discusses, it actually is his job to be aware of balances such as gender, geography and other factors. The current poetry reviewer for the National Post, Lista appears to do the bulk, if not the entirety, of their poetry reviews, which means his position demands that his reviewing responsibilities and considerations be far broader in scope than his own personal boundaries (I’ve made the same arguments about the review pages of Arc Poetry Magazine). As Walschots writes, “Only 2 of the 14 books of poetry that the National Post has reviewed in the last year in a half were written by women. 2 in 14. I was expecting some discrepancy, from what I had just passively noticed, but nothing like this.”

But then again, as Robin Richardson wisely points out in her comments underneath Walschots’ post, making Michael Lista the poster child for this issue would be reductive, if not counter-productive. I have no idea if such an oversight is deliberate, and would most likely suspect it isn’t, yet Lista’s choice of response, as told by Walschots, is just baffling.

I first heard of the Vida Scale through the SUNY-Buffalo Poetics listserve, and heard some troubling statistics about the wide gap between poetry books by American men against poetry books by American women reviewed in various of their national forums, as realized and publicised by writers such as Amy King and Ana Božiĉević. Some have suggested that the wide margin is due in part to the fact that fewer women than men do the reviewing, which even on the surface sounds ridiculous. Do reviewers automatically favour their own gender when selecting titles?

Since I’ve been active as an editor/publisher (twenty years next August), I’ve noticed the discrepancy of male against female writers. Male writers appear to have far more confidence, and the female writers, far more polish. It usually meant I’d receive ten manuscripts by male writers (most of which I’d reject) compared to one or two by a woman (more often than not, astonishing work that I had to wait months to receive, if not have to beg out of a writer’s hands). What does this mean, and where does this come from?

When I wrote a weekly book column in The Ottawa X-Press from mid-1994 through the end of 1998, I worked hard to be aware of a variety of balances, including gender, geography, style and genre. It was my job to talk about a selection of books wider than my immediate likes, especially when I realized that mine might be the only review for a particular title between Montreal and Toronto. 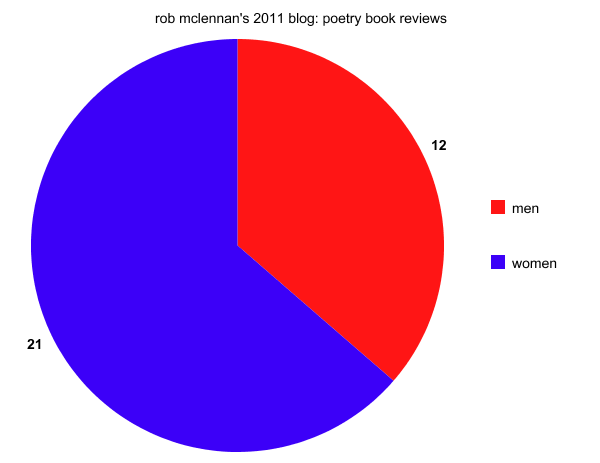 I went through my own blog, arbitrary going through the entirety of 2011 to see what my results were (which also include posts/links to my outside pieces for Prairie Fire, The Antigonish Review and Open Book: Toronto/Ontario, among other venues). I think I did pretty well on the Vida, myself (I obviously favour non-Canadian women poets to non-Canadian men). I pay attention to writing that strikes, from a variety of sources. And some publishers I request books from don’t even respond as quickly as I’d like, if at all, which alters the numbers as well. One small Canadian press went so far as to recently declare to me that they don’t send review copies to blogs, focusing instead on print media such as newspapers. They told me I’d understand (for the record, I find this outdated, considering how few newspapers bother with books at all, let alone poetry).

Is the answer for better reviewing in Canada a matter of finding more reviewers? I’ve been years (mostly unsuccessfully) attempting to get further reviewers for the ottawa poetry newsletter blog. Compared to the reviewing space it allotted throughout the 1980s, journals such as CV2 are but shadows of their former selves.

Walschots argument is a worrisome one. It’s hard enough to get books reviewed at all, with poetry even less so, without even further hurtles being put up in place. Exactly what makes for such a wide discrepancy?