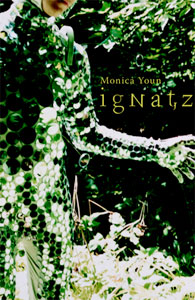 It took a while, but New York poet Monica Youn, who came through Ottawa in 2006 as part of the infamous "poetry bus tour" organized by Wave Books, finally saw the release of her second collection, Ignatz (New York NY: Four Way Books, 2010), a follow-up to her Barter (Grey Wolf Press, 2003). I've been unimpressed with the ongoing dearth of poetry collections written around historical figures, whether fictional or otherwise, done so many times in poetry that many of the themes, the images and lines even begin to repeat. Seeing that Youn, an attourney in her daily life, write poems from a more unusual and underrepresented source, and an old standard, George Herriman's infamous Krazy Kat strip (1913-1944) is a most welcome and refreshing breath. Herriman’s Krazy Kat, or Krazy + Ignatz, was the daily record of an ongoing adventure that lasted thirty-one years in the fictional Coconico County, Arizona-style. The androgynous happy cat, the angry mouse who throws bricks at our hero’s head, and the police dog whose main purpose is to prevent the daily crime. How complicated is this? A daily note, repeating. An endless, simple cycle. But with twists. Writing out of a love of language, and a pure love. A shifting landscape, a myriad of linguistic play. An admirer of the daily feature, poet E.E. Cummings composed “A Foreword to Krazy” for a 1946 edition of reprints, writing:


Ignatz Mouse and Offissa Pupp are opposite sides of the same coin. Is Offissa Pupp kind? Only in so far as Ignatz Mouse is cruel. If you're a twofisted, spineless progressive (a mighty fashionable stance nowadays) Offissa Pupp, who forcefully asserts the will of socalled society, becomes a cosmic angel; while Ignatz Mouse, who forcefully defies society's socalled will by asserting his authentic own, becomes a demon of anarchy and a fiend of chaos. But if -- whisper it -- you're a 100% hidebound reactionary, the foot's in the other shoe. Ignatz Mouse then stands forth as a hero, pluckily struggling to keep the flag of free will flying; while Offissa Pupp assumes the monstrous mien of a Goliath, satanically bullying a tiny but indomitable David. Well, let's flip the coin -- so: and lo! Offissa Pupp comes up. That makes Ignatz Mouse "tails." Now we have a hero whose heart has gone to his head and a villain whose head has gone to his heart.

So there it is. Put the brick to his head. Or was it hers. A love triangle involving this repeating action with another brick, each one new, not (seemingly) repeated. Kolin Kelly, a dog, who spent his whole life whole manufacturing bricks for the mouse to purchase, send. The Simpsons told us, the cartoon animal movement from mouse, cat, dog (Walt Disney, to his eternal credit, refused, turned this on its ear; its mouse-ears). Officer Pupp and Kolin Kelly, two sides of third-handed coin. But what does Youn's focus bring us?

Travelling backwards on the Amtrack Surfliner,
Ignatz is firelord of the Pacific, CEO

of the thermal inversion, true husband
of the Santa Ana wind. Observe his hands,

sowers of wildfire, hovering over the wave-
embroidered armrests, see the tray table

fruitlessly offering up tidbits to his gaze.
Seven rainless months have sensitized the vast

reticulations of his concern, he is each black ash
that infiltrates each kitchen windowscreen,

he is each ember hissing its defiance
on the blue surface of a kidney-shaped pool.

Including poems she read in Major Hill's Park some five years ago, Youn's Ignatz focuses on the angry mouse, one of the corners of this strange love triangle, using Herriman's often-misunderstood strip as a jumping off point to create her own collage work that opens up into so much more. What made Herriman's original strip so wonderful and confusing at the time (and since, possibly) was for his extensive wordplay, something Youn expands upon, turning his turns to longer arcs, into longer and almost straighter lines, including a couple of poems repeating the title, "The Death of Ignatz," as this one:


THE DEATH OF IGNATZ

The mesas
sink to their knees

and let the snickering dunes
crawl over them.

Youn's play is certainly here, but far more subtle than Herriman would have played, his nearly vaudvillian in comparison. Youn's Ignatz is shaped by the original material, but not any sort of poor reflection. Instead, she expands, slowly, with poems that pull at some of the original threads of the classic work, and shine sharp lights upon his flickering dark, along those Coconino wastes. Youn's Ignatz almost seeks to clarify, explore or even explain the wayward mouse, who throws his daily brick at the love-sick cat's weary head, and never stoops to giving anything away. Why cat, why mouse, why, surely, police dog? What a wonderful way to learn, and still not entirely know. But it begs the question, is this all Herriman's Ignatz has ever lacked through all those years, the presence of a good attorney, one with a poetic mind?


A THEORY OF IGNATZ

To say that Ignatz floats at the level of the neighbor is really to assert his status as denominator; i.e., he is a plane tilted at the ecliptic, both in its sense of inclination at an angle of 23 degrees, 27 minutes, and also in its palimpsestic sense, with a serim of the Latin root ecliptica (line) coyly veiling the Greek ekleiptikos (to fail to appear).