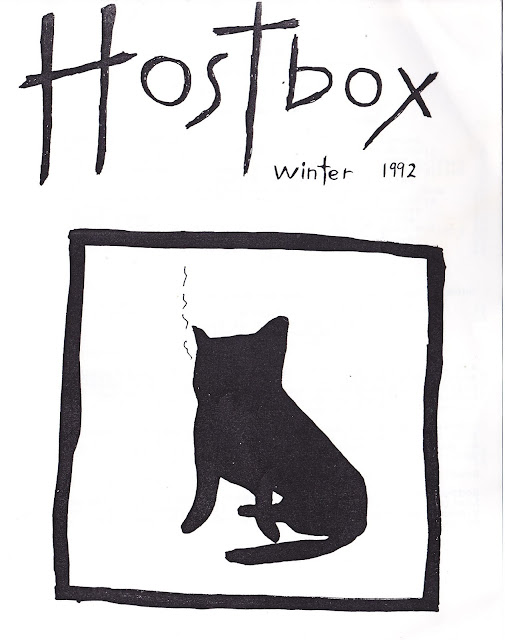 Chris Pollard was 8 years old when Paul Henderson scored the goal that defeated the Soviet Union.  Twenty years later, he and a couple of Cold War operatives began Hostbox. Now he works in a grocery store owned by a capitalist.  And he has a wife and three daughters.

Q: How did Hostbox first start?

A: In 1990, I took a poetry workshop course at Ottawa U. that was being taught by Seymour Mayne. And it was here that I met Stu (ie Stuart Konyer) and Ray (ie Raymond Nicholls). A couple of months into the school year, the 3 of us and others from the class would sometimes go out for beers. One night, the discussion turned into one about publishing, and the idea of doing our own magazine floated to the surface.  I had wanted to publish a literary magazine for a few years, but it been mostly a vapour of an idea, as opposed to anything concrete. But talking with Stu and Ray, we thought this was actually a realistic prospect. After the course finished in spring 1991, we kept in contact and combining our own work and the few submissions we were able to solicit, we slapped together the first issue, which we published in early 1992.

Q: What was the process of seeking submissions to those first few issues? Did you make a public call, or simply solicit from those immediately around you?

A: I remember that it was usually a struggle to attract submissions back at the beginning, it was especially so. Part of the mandate of Hostbox was self serving in that we wanted a forum to publish ourselves. And we allowed ourselves 3 poems each per issue. And then there were the cartoons and bits of fiction. So the early issues were largely comprised of ourselves. As for non-editors, I know we tapped a few friends but beyond the word of mouth that the magazine itself mildly produced, generating a handful of submissions, I don’t recall actively putting out the word. I do have a memory of one of us contacting the Citizen books columnist, hoping for a plug, and being profanely bitter (or bitterly profane, I forget which) when we were refused. But first and foremost, Hostbox existed to get ourselves published, and everything and everyone else was largely gravy.

Q: Was Hostbox influenced by any other publications? Were you connected to or aware of much of the other literary activity in Ottawa at the time?

A: Our original influences were not very specific, other than wanting to produce a literary journal sort of like the ones that were regularly rejecting us, and to do it on the cheap. I don’t remember being very aware of zine culture even though in hindsight I think we subconsciously embraced that aesthetic. I guess in essence, for me anyway, Hostbox was an attempt to synthesize the whole punk diy philosophy with The New Yorker, which the idea to include cartoons in Hostbox was a direct lift from. 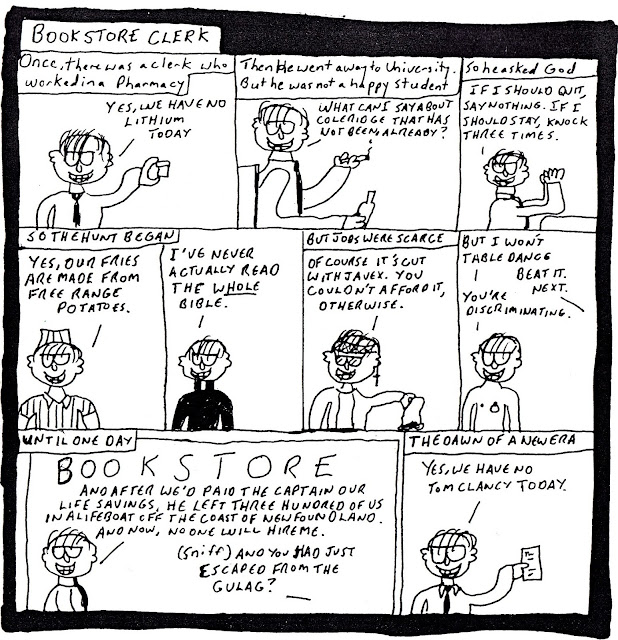 Q: I’ve always been a big fan of the cartoons, and, for me, they played such a large part of the tone of Hostbox, especially your “bookstore clerk” comics. Were they something that you were already doing, or did they emerge as the journal first came together?

A: I used to do one-frame cartoons for my school newspaper, which was an enterprise that I ran with one other person. It was largely a vehicle for me to try out some of my ideas at the time, and on occasion, actually address school matters. The cartoons were for the most part, dreadful Far Side rip-offs. After that, I would every once and a while, sketch out an idea for a cartoon, but until we started Hostbox, I did not do much with them. Once we got talking about starting Hostbox, I know I pushed the cartoon idea for two reasons. One because I loved (and love) The New Yorker, and in my own small way, wanted to pay homage, but more importantly, and I think this was the point that sold Stu on the idea, I wanted to puncture the grandiose self-important preciousness that poetry magazines often exude. So, I think I was already planning Bookstore Clerk at the time, and I worked with a very funny guy who came up with the Albert Camus strips. And then Peter Gould, whom my wife worked with, began to contribute, and I was very pleased with what the cartoons did for the tone of the magazine. Not sure if this answers the question but I’ve typed ever so much.

Q: Much of the tone of the journal is evidenced in those cartoons and sketches, included within each issue as well as on the front cover. You mention wanting to “punctuate the grandiose self-important preciousness that poetry magazines often exude.” It seems fairly obvious that the entire aesthetic of Hostbox worked very much to accomplish this, allowing some real humour and even ridiculousness throughout. Were you seeking submissions along those same lines, or was it more the idea of publishing interesting writing in a forum that refused to take itself too seriously?

A: In general, we were just happy that anyone was sending us submissions. Frankly, I found it amazing that complete strangers had heard of us and thought it worth their time and effort to organize putting anything in the mail for us. That said, we did receive a lot of terrible material. So the guiding winnowing principle came down to trying to find enough work we could live with putting in the magazine. So, to answer the question, I think our philosophy was definitely more of the latter (ie ‘publishing interesting writing in a forum that refused to take itself too seriously’). At the end of the day, most of what was absurd in Hostbox was what we ourselves deliberately put into it (or specifically recruited with the cartoons by Peter and Jake), and after that, we were hoping that the actual poetry and stories were good enough to stand up next to what the more “serious” magazines were publishing. 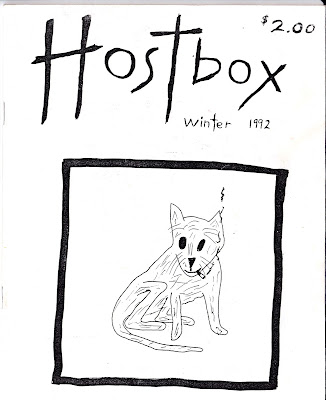 Q: How did the magazine get distributed and what were your print runs? I remember you at the first few ottawa small press book fair events, for example, but how else were you getting copies out into the world?

A: I forget what our print run for the first couple of issues was but we eventually settled into a pattern of 200. For a period, we would have them printed and collated at printers but then Stu got a really good printer so we printed them ourselves and would then have collating gatherings with spouses and friends. We must have still had to get them stapled at a printer as we did not own a sufficiently long enough stapler but my memory is fuzzy on that one.

As for distribution, we did all our own. We hit up any store that seemed like they might be possibly game to carry Hostbox. The obvious candidates were magazine stores that already had zine shelves like Mags & Fags and Brittons. There were others but most are gone now and again, I am forgetting their names. We also got into stores like Shake Records (where I spent much money over the years they were open) as well as a couple of bookstores. In Ottawa, I think at our peak we were in a dozen or so stores. We also were briefly in a store in Montreal (I completely forget their name or even where they were located) we happened upon once and asked if they would carry us and for a while we mailed new issues to them. We also were in Gotham Books in New York. That was pretty cool. In 1994, Stu and I (and spouses) went to NYC and made a point of going by and we were pretty jazzed to see Hostbox sitting on their shelves.

Usually we dropped off quantities of 5 and then when we had a new issue, we would pick up what did not sell and the ‘profits.’ I think we were paid 1.20 for each issue sold (the cover price was two bucks). We never covered our expenses and we never sold even half of our print run. But we never expected to get rich off of this which was probably for the best.

Q: How was Hostbox received? 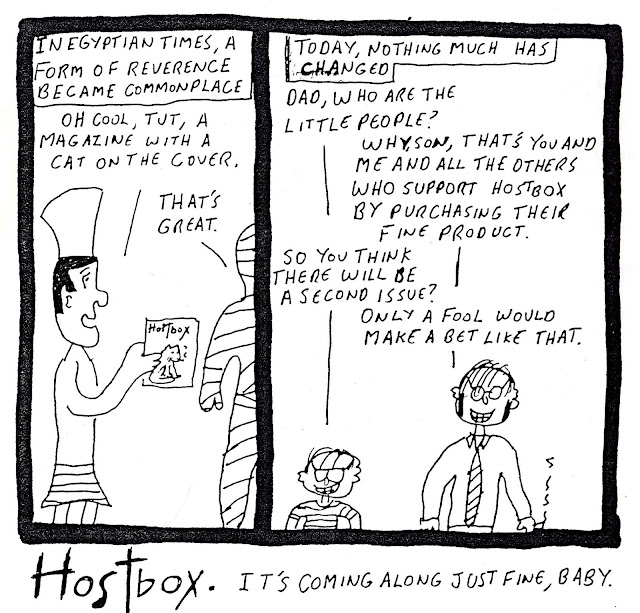 A: Honestly, Hostbox was barely even noticed. We were just another zine (and not even free like Bywords). Stores would grudgingly agree to take five copies each and drumming up submissions outside the group of people we knew was always a challenge. But then again the people we knew was a group that did grow because of Hostbox. People like yourself of course and a number of others involved in the local scene seemed to like what we were attempting to do. I didn’t expect us to change the world and we didn’t so all told I guess we got exactly the reception we expected and probably deserved.

Q: After all this time, what do you feel Hoxtbox achieved as a small literary journal? What are you most pleased about? What are you disappointed about?

A: When we first started Hostbox, Seymour Mayne (who was the professor in the class where Stu and I [and Ray] met) declared that literary magazines rarely make it to 3 issues and so when we stubbornly produced 16 issues, I think we were to a degree still responding to that. This was our primary achievement. Otherwise I don’t believe we had any lasting impact. And to be honest I don’t think I am especially disappointed about anything regarding Hostbox. Obviously it would have been great if it had really taken off and we’d been able to rent that office space in the Empire State Building I have my eye on but it was a zine and makers of zines must be realistic about their ambitions. As for what I am pleased about, recently my oldest daughter informed me that when she is describing her parents to new friends, she usually mentions that I co-created a poetry magazine for people who hate poets (no offense). I can live with that legacy.

Q: What was behind the decision to finally end the journal?

A: A combination of time and money. Time in the sense that my first born was on the way and apparently kids can eat up large swathes of energy and attention. And by money I mean that we lost money on each issue. Sales never came close to covering production costs (not that our costs were huge) and I think Stu and I both felt like we’d accomplished as much as we were going to accomplish and given that our circulation and sales never really increased, I think we also both felt like we were spinning our wheels. So yeah, time and money were the primary nails in the Hostbox coffin.

Volume I, Number One. Winter 1992. Editors Stuart Konyer and Chris Pollard. Poems by