One of my favourite American chapbook presses, Little Red Leaves Textile Editions are edited, designed and sewn by Houston, Texas poet Dawn Pendergast, with the covers for each title produced by materials found from a variety of sources. Over the past couple of years, I’ve written about her chapbooks here, among other posts. I keep hoping she might even answer the small press ’12 or 20 questions’ questionnaire at some point, possibly. First off: I like very much how the poem/chapbook of The Rose: A Poem by Beverly Dahlen (2013) is slowly pulled and stretched apart:

the stink of dying roses    black at the heart 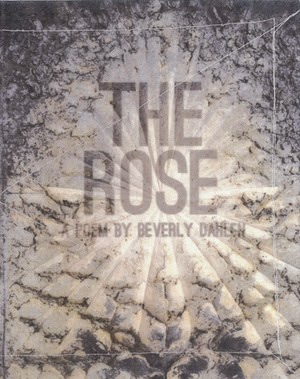 San Francisco poet Beverly Dahlen’s second Little Red Leaves title—after A Reading: Birds (2011)—is, according to the website, “dedicated to Jay Defeo’s 2000 lb work with the same name.” The reference intrigues, and the internet explains that the late San Francisco visual artist Mary Joan Jay DeFeo (March 31, 1929 - November 11, 1989) was considered to be part of the Beat Generation, and “The Rose” (1958-66) is considered “her most well-known painting,” and one that “took almost eight years to complete and weighs more than one tonne.” Part of DeFeo’s piece is replicated on the cover of Dahlen’s small chapbook. Given the weight of the piece, the lightness of Dahlen’s poem is even more remarkable, able to articulate something of Defeo’s painting, writing “ghastly / ghostly / acid light,” to “sacred [sacrificial] star / dark star / im / ploded [.]” Furthering Dahlen’s ongoing series of response texts, “A Reading,” into the realm of responding to visual arts, I would be curious to hear some of the author’s thoughts on composing such a piece, if she would consider such a straight response, or something even akin to translation.

I TOLD THIS SMALL MAN: if I had a mule, a parachute and long flowing locks, I would jump out of this plane, put you in my shopping cart and push you clean to Brazil where we would change our names, cut our hair and join the local militia. After that, we would lead a small army of chickens to the sea and, after many days of floating, I would catch a small fish and name it Pavlov. Then, we would all jump into the sea and swim until we reached the large island of Europe, where we would start a mariachi band with my birth family and yours and the sun would set and we would all drink sugar water and go to sleep beneath a large curtain of black air.

Boulder, Colorado writer Sara Lefsyk’s second chapbook, after the christ hairnet fish library (Dancing Girl Press, 2013) is the utterly charming A SMALL MAN LOOKED AT ME (2014). Composed as a sequence of short prose sections, the design allows each paragraph/stanza to wrap over to the subsequent page, allowing for something far more compelling than had everything been standardized. It allows an interesting take on the prose, suggesting a more organic and linked progression from section to section. An imagistic sequence of self-contained pieces, each prose-section works to accumulate slowly into the realm of extremely short novella, heading towards a subtle and soft denouement. Where is this short work heading, exactly?
Posted by rob mclennan at 8:31 AM
Labels: Beverly Dahlen, Dawn Pendergast, little red leaves, Sara Lefsyk