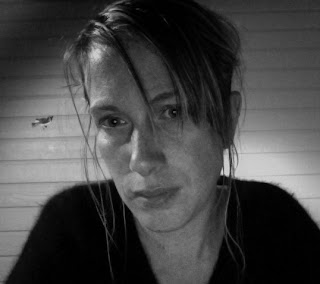 Leigh Kotsilidis is a stop-animator, installation artist, freelance graphic designer and poet. In 2009 and 2010 she was selected as a finalist for the CBC Literary Awards. Her first book of poetry, Hypotheticals, came out this fall (2011) with Coach House Books. She currently lives in Montreal.

1 - How did your first book change your life? How does your most recent work compare to your previous? How does it feel different?
My first book hasn't changed my life, at least not yet. Though, it has freed me up in some ways to try writing something different. It's a bit too soon to go into detail, but I'd say my recent work is more narrative than my previous work. The actual toil doesn't feel much different to me, though again, it may be too soon to say. I find that clarity comes with distance and right now I'm in deep.

2 - How did you come to poetry first, as opposed to, say, fiction or non-fiction?
I didn't come to poetry first. I started out writing short stories. I still have some of the stories I wrote as early as kindergarten. I used to dictate them to my teacher, who would type them out for me, and afterwards I'd illustrate them. I wrote my first poems in grade 5. I remember giving my mom a poem I wrote titled "Death." I was a morbid kid in some ways. High school is when I started writing poetry more regularly --- depressing angsty stuff, full of obvious rhymes and cliches. I think my attraction to poetry over other genres came from its exactness in communicating my interior world, not necessarily literally, but through metaphors. It was an outlet before it was literary for me.

3 - How long does it take to start any particular writing project? Does your writing initially come quickly, or is it a slow process? Do first drafts appear looking close to their final shape, or does your work come out of copious notes?
Right now it feels like it's taking me forever to start any writing. I find a million 'practical' things I need to do before I allow myself to sit down and write. Poems usually take me a long time, but seem to take me even longer when I start taking the poems too seriously. If I'm too earnest about the whole writing process than the words just don't come.

In most cases my final poems have some resemblance to their first incarnations, though I'd say they're more like distant cousins than siblings. They usually go through about ten drafts before I consider them passable.

4 - Where does a poem usually begin for you? Are you an author of short pieces that end up combining into a larger project, or are you working on a "book" from the very beginning?
Poems usually begin for me with a collection of random lines that I've written down over a long period of time. I often find that some of these lines relate, they may just need some tweaking or connective tissue to work together. The process of creating poems for me is closer to assembling lines than it is writing. I also tend to create shorter pieces that then end up in a larger project (which could also be considered assembling a collection), though this new project may work differently than the last, we'll see.

5 - Are public readings part of or counter to your creative process? Are you the sort of writer who enjoys doing readings?
I wouldn't say that public readings are a part of my process, but nor are they counter to it. I see them as something separate from my creative process. I have mixed feelings about doing readings. I always agonize over the idea of reading in public, but then, once it's over feel happy that I've done it. I find it interesting how different a poem can come across read aloud as opposed to written on the page. I think understanding this difference has helped my poems. I also recognize that it is through public readings that a lot of people are introduced to new authors, as well as how publishers sell books, so I see it as part of my 'job' as a writer. Though, I must say, being an audience member is a lot more fun for me.

6 - Do you have any theoretical concerns behind your writing? What kinds of questions are you trying to answer with your work? What do you even think the current questions are?
My collection Hypotheticals is primarily engaged with how people use science as metaphor to understand or explain their lives, and how these metaphors then work to reinforce and/or undermine beliefs. In some ways, these poems are my attempt to expose our own unreliabilities, as well as the fallibility of science; especially when our personal opinions and the theories we put stock in will invariably change. I decided to organize the book into sections ---Evidence, Variables, Falsifications and Conclusions--- in part to echo the scientific method, as well as to set a tone for each division of the manuscript, which is then either implicitly challenged or supported through the poems that follow. My goal here wasn't to elucidate the scientific method, but rather was to conjure the rhetoric of science, which is also used in many of my poems. I'm interested in how we use rhetorical devices, specifically those of science, in knowledge construction. I think many of us are more likely to be convinced something is true if it's written or spoken using the authorial voice of science. These 'truths' are then inadvertently applied as metaphors to construct meaning and personal knowledge in our everyday lives. For example, we may find ourselves relating our love lives to bees, magnetism or weather systems (at least I do). The problem for me is how we can 'know' anything when so much of the science we use has the potential to be a metaphor for something else. I should also mention that I am not an expert on any of the theories I've used in my book, but rather it's my attempt to challenge readers to examine what it is we often take at face value to be true. Currently, I'm still interested in writing poems that are informed by scientific theories, but I'd say my focus is shifting to include an even broader range of "knowledge."

7 – What do you see the current role of the writer being in larger culture? Does s/he even have one? What do you think the role of the writer should be?
Wow, this is a hard question. I'm not entirely sure what the current role of the writer is in society, nor do I know what it should be. I can say that I think poetry can offer an alternate view of the world that goes beyond literal explanations. It is capable of capturing the ineffable qualities of our existence, which help us to see what was there all along and recognize our potential to think about what else it might be. Possibly the poet's role is indirectly epistemological? I'm still thinking this through...

9 - What is the best piece of advice you've heard (not necessarily given to you directly)?
Relax.

10 - What kind of writing routine do you tend to keep, or do you even have one? How does a typical day (for you) begin?
I don't have a writing routine, but I think I could really use one. A typical day for me begins with responding to emails or doing other administrative things. The problem is that this can become endless. Lately, I've been trying to put a cap on the amount of time I spend doing this. I'm seriously considering downloading Freedom software, which will bar me from the internet for periods of time that I can then devote entirely to writing.

11 - When your writing gets stalled, where do you turn or return for (for lack of a better word) inspiration?
It depends. When I feel blocked for ideas for poems, I tend to listen to radio programs, such as CBC's Ideas or watch science shows, for example The Nature of Things. I also read essays or books that are preoccupied with concepts. If I'm feeling blocked, not necessarily for ideas, but to actually sit down and write, I tend to read more poetry. Reading poems usually gets me in the mood to write.

12 - What was your last Hallowe'en costume?
Last Hallowe'en I was the Dairy Queen. The costume wasn't bad, but I'm not sure why I felt the need to brand myself as a queen of fast food slop. Nostalgia maybe?

13 - David W. McFadden once said that books come from books, but are there any other forms that influence your work, whether nature, music, science or visual art?
If it isn't already obvious, science definitely influences my work, as does weather, landscape, food, music, relationships, visual art, animals, conversation, travel and so on. It's hard for me to draw a distinct line between what I experience everyday and what ends up in my poems.

14 - What other writers or writings are important for your work, or simply your life outside of your work?
Too many for me to keep on top of.

15 - What would you like to do that you haven't yet done?
Oh wow, so many things! I've never gone horseback riding, winter camping, scuba diving or hunting. I've never been in a hot air balloon, helicopter or a submarine. I haven't been above the tree line, or to South America, Asia, Africa, Antarctica or Australia. I've never eaten a durian... The list is endless.

16 - If you could pick any other occupation to attempt, what would it be? Or, alternately, what do you think you would have ended up doing had you not been a writer?
Hmm? Since most writers have to have day jobs and I'm still figuring out what my day job is going to be, I haven't ruled out anything yet, not completely, though I am trying to be more realistic about my time these days. I have a tendency to romanticize other people's professions, especially the geologist, geneticist, anthropologist, archaeologist, zoologist and botanist. I'm not sure which one resonates more with me.

17 - What made you write, as opposed to doing something else?
I think I chose to write because it doesn't necessarily need me to limit my interests. I can write about it all (or at least I can try).