Thirty-two years old, she managed the impossible: an unbroken length of apple peel, fit for the shoulder toss. She remembered the chorus her grandmother sang, trilling peel, peel, please reveal. She tossed, and once it touched tile she turned, less a letter than line, with ambient twirl. Years earlier, she remembered high school-era gifts from her favourite aunt including a Michael Ondaatje signature, an autographed copy of The Cinnamon Peeler: Selected Poems and his novel, The English Patient. The film had resonated, deep in her bones. And now, this red delicious signature apple-inked on her floor. The cinnamon-spice blush on her blue jeans. 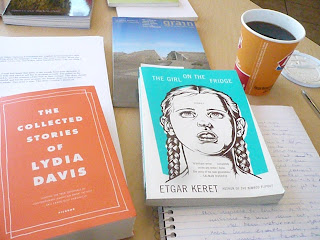 I've been working on a collection of short stories for nearly three years, carving little narratives down as sharp as I can. I cut my fingers. Blood mixes in with my lines.

During my high school years, I attempted similarly-short stories, continuing for a couple more years after I arrived in the city. There was even an entertainment bi-weekly that published a few of them, until it folded in 1994. The last four months of Ottawa's Metro magazine included one of my stories in every second issue. By the end, I was composing new short fiction just to see if they'd appear.

There are a few ways I have come to these conclusions. In my early twenties, reading short stories and the accumulations of Richard Brautigan novels. Canadian writers such as Sheila Watson, Elizabeth Smart, Michael Ondaatje. That pointed brevity. I'm more attracted to stories that stop just before they end. Is it fair or reductive to suggest this comes from years of writing poems? I want no wasted words. Is this from years of composing reviews? When exactly to do you get to the point?

Just how much does a story require to contain a story? I continue to send mine out, only to have them rejected. I never exactly know why, although I have a number of theories that are only theories. I don't know where to send them.

The current project of short stories triggered when I read the short, sharp stories of Sarah Manguso [see my piece on her here], her Hard to Admit and Harder to Escape (San Francisco CA: McSweeney's Books, 2007). Part of the appeal of her stories was in the construction of the collection of untitled short pieces; was this a straight collection of short stories, or a loose and abstract narrative built as an accumulation into a novel? Through Manguso, I became fascinated by the blur, and the distinction.

From Manguso, furthering to some lovely prose experiments in sentence: a journal of prose poetics to New York City writer Deb Olin Unferth, and finally tracking some of Unferth and Manguso's influences back over the past few weeks to another American writer, Lydia Davis, through her seven hundred plus page The Collected Stories of Lydia Davis (Picador, 2009), which includes this little gem:

that Scotland has so few trees.

What did I tell you? Do stories require long, complicated narratives? Do we even need to know such extraneous bits as hair colour, clothes, cities, gender, the colour of their skin? Only when essential, only if the story requires. What do we know of Samuel Johnson? Is that important? Where the hell is she sending her stories? What exactly am I here to tell you?

Apart from discovering Davis, more recently I've been introduced to the work of Israeli writer Etgar Keret, through his collection of short stories, The Girl on the Fridge (New York NY: Farrar, Straus and Giroux, 2008). How enviable, to be this damned sharp. To say so much in so little.

In my fiction, I am working on writing big stories in small spaces. Small novels, even smaller stories, and all written in dense, packed prose. Patience, breathing. Carve, slowly. Carve further, even slower. Pause. Listen.

When you have an asthma attack, you can't breathe. When you can't breathe, you can hardly talk. To make a sentence all you get is the air in your lungs. Which isn't much. Three to six words, if that. You learn the value of words. You rummage through the jumble in your head. Choose the crucial ones--those cost you too. Let healthy people toss out whatever comes to mind, the way you throw out the garbage. When an asthmatic says, "I love you," and when an asthmatic says, "I love you madly," there's a difference. The difference of a word. A word's a lot. It could be stop, or inhaler. It could even be ambulance.

As any artist knows, your art should move only and exactly where your interest does, which can, theoretically, lead anywhere and everywhere. Some things can't be forced, and false roads quickly identify themselves. But one is constantly forced to ask, to reassess, is it even working?


He refers to it as his collected wisdom, all the shards of information he’s picked up, collated, held in trust to punctuate conversation so as to appear more interesting than he really is. Catherine the Great’s love of horses, conjoined twins from the 1890s concurrently pregnant from their physician, the air speed ratio of an unladen swallow.