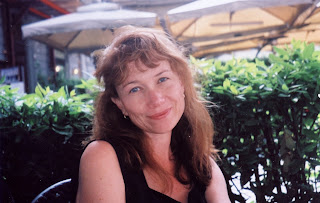 1) Writing poetry changed my life — the process rather than the product. Although it was a delight and a pleasure to see my poems collected between the covers of a book the joy I felt when I wrote them eclipsed anything that came after. True story!

2) I came to Winnipeg in 1993 and except for four years in Vancouver have lived here since. Because I am an immigrant to this city I have always felt un-placed, aslant, wayward. This is a very lucky posture for a writer to assume.

And Winnipeg, which is — I think — an exaggerated, histrionic yet oddly ironic place refuses the easy cliché. Guy Madden has famously called our city the domain of sleep walkers, back alleys, and the repressed subconscious. Nice.

5) My theoretical concerns are fairly concrete and are usually tied to a particular project. In my last book, Slovenly Love, I explored the narrative line within longer poems — I was interested in the clash between lyricism and drama.

At the moment I’m interested in experimenting with rhythm, half-rhyme, tonality. I’m working on a series of “walking poems” and want to find a writing gait that mimes that of the flâneur as she ambles and strides through the city.

8) Don’t like pears much, though. Taste too pear-y, look too female nudish.

9) Fred Wah once told me (always) to end a poem (many) lines earlier than I was inclined to.

He also told me to kill the thing I love most.

I believe he was referring to poetry. Hope so.

10) The appeal has been the difficulty of stretching myself in ways that are not entirely comfortable. Attempting to write laconic fiction, creative non-fiction, styptic poetry. Resisting my fiercest temptation — the lyric mode.

15) My latest “for instance” is Gerard Manley Hopkins who I am rereading as I do periodically to remember the first time I really bit into a poem and tasted the gush of language. Aspens dear and brindled cows and skies of couple colour and so on.

When I read Hopkins aloud I feel as if my soft palate has turned into a trampoline.

16) I would like to visit the sites of some of the really great poems of our time. Machu Picchu as a salute to Pablo Neruda, Key West for Wallace Stevens. And Paradise, of course, for that guy who kept losing and regaining it.

17) I would like to do something wholesome and orderly. Writing descriptions of movies for the back of Blockbuster DVDs springs to mind. I would be very precise about the sorts of obscenities and cigarette-related scenes that should be avoided. I would be making the world a safer, more G-rated place and watching lots of movies in the bargain. I would be indulging my passions for order and bossiness.

18) No other talents, no endurance, no appetite for hard work, I’m afraid.

19) Have just finished Kiran Desai’s The Inheritance of Loss which is a wonderful mixture of devastating narrative, plunging event, and beautiful language which buoys the reader above the — well — loss.

I recently watched The Princess Bride again and loved it as much as I did when I saw it the first time and held my breath at the spectacle of the fire swamp, rodents of unusual size, and true love’s triumph.