12 or 20 questions: with Shane Rhodes 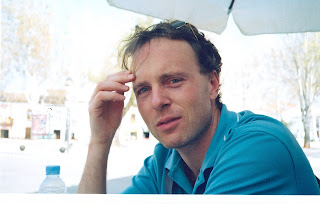 His most recent book, The Bindery, was published by NeWest Press in March 2007.

I remember filling a pad of paper with page after page of scribbled script that went from right to left across each of the writing pad’s miniature pages. I might have been five or six. I finished the book in about five minutes and, if I remember correctly, was quite pleased with its reception.

I still feel new to Ottawa though I’ve been here for about seven years. I had a repeated dream during my first months in Fredericton, New Brunswick where I had moved to attend university. In the dream, my eyes were level with a seam. Above the seam, all was blue. Below the seam, all was yellow. It took me a while to realize that the dream was of a horizon, something in my mind was yearning for those clear prairie sightlines rather than the Eastern Canadian patch of blue floating amongst the mapletrees.

I grew up in the prairies, in a small town in the middle of nowhere surrounded by soontobe ghost towns as the rail spurlines closed. I guess that desolation, that neglect, prepared me for poetry.

If you are translating geography from Greek as earth+writing rather than a field of science, than, yes, geography is important, without it, my work, any work, is groundless. But my writing and reading and travelling bump into the question: what would a North American earthwriting actually look like? Much of our writing seems so homesick, hearkening for an imagined Europe, the Greeks, a homeland that is elsewhere.

A note about “groundless” writing: the word will always be marked for me by its use in the poet Duncan Campbell Scott’s report (he was a Treaty Commissioner at that time) on the signing of Treaty #9 in which he called First Nation concerns “groundless.” If there was ever an ungrounded poet, it was he.

My poems barely begin and rarely seem to end but shade themselves in and out of everyday life. In all ways, taking the time to sit, work on a poem that few will read, meddle with its fine inefficiencies, seems like an act of counter (that is, unproductive) culture. Books, projects, and poems seem to coagulate out of that mess. Poems, for me, begin and end everywhere.

Oral performance is an integral part of poetry, it is hard to imagine poetry or much good writing at all, without oral performance – only in some concrete poetry and government briefs is it unimportant. I think public readings are also a vital part of making and maintaining community. We few gather to listen, to kibitz, to admire, to complain, and to communicate. Poetry readings are a gathering of the freaks (myself included) in a culture (or should we use “economy” in place of what culture once was) that could go on fine without us and barely tolerates us.

I am a pragmatist. I use what I find useful but don’t feel the need for theoretical fundamentalism (that is, as in any type of fundamentalism, blindness). I think theory concerns that mean anything to anybody are human concerns: how can I understand what is happening around me (looking). I would say that I follow a stray dog poetics, if I can use such a term for my mutt conglomeration of impulses. This is a poetics, a theory of composition, built on lightness, wander, wonder, hope, anger, inquisitiveness, love, hunger, lust.

I can’t say that I have worked with many outside editors, mostly inside editors.

The process of making three books has made me much more aware of the limitations of book making and the limitations of my own approach to putting poems into books. I would say that it has made me think much more about how books function for me personally and my craft but also in the culture. Bookmaking and publishing is harder, perhaps, once you have finally blown off the illusions and realize that books = something few will buy and even fewer will read.

Know how to drink, how to dance, some names to call the stars.

10 - How easy has it been for you to move between genres (poetry to reviews/critical work)? What do you see as the appeal?

I left academics (that is, going on to do a doctorate) because I loved doing critical work too much, to the point that it was taking me away from writing poetry. I have also given up most of my review writing (I used to do quite a bit) as I find it hard to fit in with a full time job, reading, living and writing. There is the ability to chase down an idea in critical writing that I miss and that has leaked back into some of my writing practice.

There is such a breakdown of boundaries between prose and poetry anymore (much to the chagrin, I’m sure, of the “true” novelists and poets) that it is hard to say if there are separate genres anymore. I find writing on the cusp most interesting.

Nobody needs to know this much information. Suffice to say I sleep, I wake, I eat, I walk, I fuck, listen, and talk. I make room for thought.

My writing has never been stalled. Perhaps what you are calling “stalled” is actually “doubt”? Work with doubt.

With the publication of another book, each of the books before seem to have been written by a naive and youthful idiot.

These two phrases don’t belong in one question for me. Outside of my writing is the life I need to actually be able to write – I work with the federal government on domestic HIV/AIDS issues (I have been working in HIV/AIDS in Canada at the local and national level for over ten years now). This is interesting work for which I am well paid as opposed to poetry, which is more interesting but much less well paid. Other things and writers that are important to my work right now are a multitude (cf above) that I fear to numerate.

Inspector General of Rabbits and Chickens in Public Markets

I have no idea. Terrible decision making? Lack of parental guidance?

The last great book I read was Omeros by Derek Walcott.

As I’ve been travelling for the last three months in South America, I haven’t seen many films as most of what is available there is Hollywood in translation. One thing that I did see recently, though, amazed me. In the city of Cordoba (the third largest city in Argentina, with about 1.5 million people) there are three or four private and public art galleries that showcase Argentine and Cordobaen modern and contemporary art. These are some of the best art galleries I have ever seen and some of the best presented art I have ever seen. It speaks to a collective wisdom, both a pride in local and regional art but also a desire to have art as part of the city’s overall vital infrastructure (these galleries are partially or completely supported by public money), that I have seen in few other places. It is exhilarating to see art taken so seriously by a population and its politicians as opposed to many other places where arts funding and infrastructure is seen not as a vital component to living but more as a type of social welfare for the freaks who can’t make it in business.

Finishing off this question.