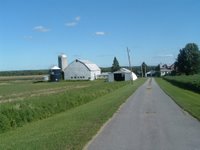 Ongoing notes: Glengarry
This is a variation on an image I wanted on the cover of my second poetry collection, bury me deep in the green wood (Toronto ON: ECW Press, 1999); I’m hoping Joe Blades will let me put something like it on the cover of glengarry: open field (a manuscript that includes the extended version of what appeared recently as Perth Flowers), a book I’m planning on sending him for 2008 or 2009. Today Kate & I spent part of the day wandering around Glengarry County with Emma, my sister’s oldest daughter (2 1/2), predominantly at the park in Alexandria, & into the Dairy Queen (of course), before doing our own wanderings (she had to be dropped home for a nap). 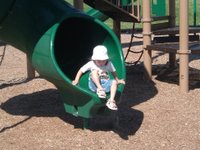 I’ve been taking a series of photographs of the house, & thinking about a long poem about the house itself, called "house: an essay," perhaps even as a further section to a larger unit that will include the already-completed sixty-three poem cycle "gifts." Where will this all lead, I wonder?
Kate & I head back into Ottawa tomorrow, but I was briefly back tonight to hear Kingston poet/curator Jan Allen read at The TREE Reading Series. Once I’m back in Ottawa, I have to finish Ottawa: The Unknown City before I head off on various tours including readings in England & Wales with Stephen Brockwell from September 1-6, & across Canada in November. There is so much that I have to do first.
The whole drive back to the farm from the city tonight, the big moon shined the way home.
Posted by rob mclennan at 11:59 PM