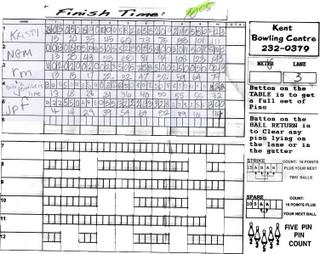 We had each of them in Ottawa on October 15th, after the most recent ottawa small press book fair. To celebrate the fact that Nathaniel G. Moore's Bowlbrawl(Conundrum Press; check out Moore's version of events here) isn't out yet, a small group of us broke off from the regular eating / drinking / yelling we usually do at the James Street Feed Company directly after each fair (and Fiorentino wanted to watch the Habs game; good luck in a Senators town on game night) and went to the Kent Bowling Lanes for a game of glow-in-the-dark five pin. A group of five, we were myself, Jon Paul Fiorentino, Kristy McKay, Nathaniel G. Moore and Jennifer Mulligan. I've rarely bowled, and I think the last two times I did were at the same place with my daughter two years ago (we had a coupon), and in 1998 at the West Edmonton Mall with David McGimpsey, during the Great Canadian Via Rail Tour (check out all the photos; I almost look young in some of them), sponsored by the ottawa international writers festival (afterwards we went to a Hooters, and ate chicken wings with our bottles of Budweiser. Who can refuse a stereotype?).

The same night at the James Street Feed Company, after Fiorentino lost his Habs game to the locals (but does it matter? his team lost anyway), he heckled all the Ottawa Senators fans, and Mulligan (she's even related to the guy who gave "Mulligan" the "do-over in golf" meaning; an American descended from her Mulligans in the Pontiac region of Quebec) reminded him that they were (at the time and still) unbeaten in the season. They now have $10 riding on it; Jennifer says they'll take the Stanley Cup. Jon Paul says they're a bunch of hacks (you heard it here first). Anyone else?

Doesn't it make you wish you made it to the small press fair? Or at least came out afterwards?
Posted by rob mclennan at 4:44 PM

I cannot be beat by anyone in Canadian Literature. In a game of bowling that is. I've been beaten in every other way it seems, and this has been well documented on the Discovery Network. Anyway, thanks for posting this rm/jm you have done a great service to the community at large. I look forward to beating you all again, later this season.

I enjoyed your dominos coupon blog. Check out this coupon forum... You can exchange coupons there. : **Coupon Exchange**

so they lost - big whup.....there's always next year. i suppose i owe jpf money or something now - yeah he can friggin' well fight me for it....!! least they lasted longer than the loser team from montreal