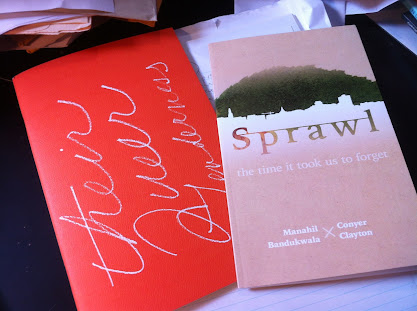 New year, new what? New everything, possibly. One lives with that hope, I suppose.

Oh, and I’m doing a reading on January 13th via zoom for the Barcelona-based poetry and fiction journal parentheses, alongside Christine McNair, and Philadelphia poets Pattie McCarthy and Kevin Varrone: two households of poet-couples. See the information and link for such here.

And there’s still time to subscribe for the 28th year of above/ground press! But you probably already know that.

Halifax NS: During this time of lockdown, Ottawa poet Conyer Clayton and former Ottawa poet (returned to Mississauga) Manahil Bandukwala have composed the collaborative Sprawl: the time it took us to forget (Collusion Books, 2020). As they write in their “Process notes” at the back of the collection:

We began writing Sprawl on March 18th, 2020, and completed the first draft on March 24th. Conyer wrote a poem and sent it to Manahil via email, Manahil responded, and we continued in this way until it felt complete. The poems interlock in the echo between first and last lines and in the recycling/remaking of one another’s images and phrasing. The final poem written, which now appears as the first, is made up of those repeated lines.

Their extended, chapbook-length sequence is a poem of joining and contention, coming together yet remaining separate; a poem of joining and solitudes, reaching out to attempt to bridge their distances. There is something in the way their lyrics, lines and phrases come together, wrapping around each other, akin to strands of dna: separate threads that merge for the sake of something else, something other. I’m curious about their collaboration. While this poem does feel in the early stages of two poets attempting to see what might be possible, I hope they continue what they have only just begun.

We drink our cups
in separate rooms, hope

the other will enter
without wanting.

I wrap my arms around
my own body

so I don’t forget
touch.

Mutation is only natural
in winter, in cold
you cannot simmer away.

I think of myself as a seething broth.
Add onions, add scraps.

Can you fish me out
without burning yourself?

Toronto ON: From Calgary poet Neil Surkan, author of On High (McGill-Queen’s University Press, 2018) and the chapbook Super, Natural (Anstruther Press, 2017) comes Their Queer Tenderness (Toronto ON: knife|fork|book, 2020). There are some curious movements to his lyric narratives; taking an image or an idea and stretching it, stretching it out beyond possibility. “Diving into colder / skin,” he writes, as part of “OUTPOSTS,” “I watch my greenish fingers comb / the current till they pierce // ground, its clotted expanse. / This body, mine to hold // down here while it burns / for air and hears // itself.” Surkan covers a great deal of ground in a short space, and understands the light touch of a line constructed to contain the right amount of depth.

You dog at a mirror. How
do you glimpse yourself only
when you move? Air
is fertile, all perfumed
motes, pollen,
mold. Do you really feel
desperate, or did
a subwoofer just bloom
over there? Savoury
nausea. Furred everything.
the difference
between me and you?