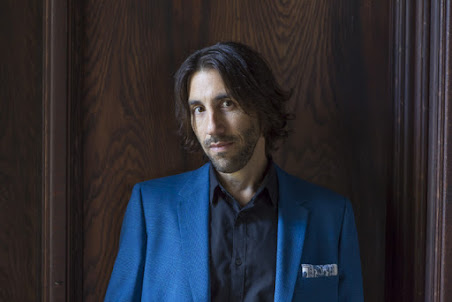 David Hollander is the author of the novels Anthropica (Animal Riot Press, 2020) and L.I.E. (Random House, 2000). His work has appeared in McSweeney’s, Conjunctions, Fence, Agni, Unsaid, The New York Times Magazine, and Post Road, among many other reputable and disreputable publications. It's also been adapted for film and frequently anthologized, notably in Best American Fantasy. He lives in the Hudson Valley with his wife and two children and teaches writing at Sarah Lawrence College.

My first book, L.I.E., came out 20 years ago. I was just a kid, really, and didn’t realize how lucky I was, or how difficult it was to publish a novel. I figured it was the first of many published books and that I’d have a literary career of some sort. So if anything, the first book created an impression—that I was “somebody,” “the next big thing,” etc.—that has slowly eroded over these two decades. Anthropica, the new book, is being published by a small press, during a global pandemic and amid waves of violent national unrest. I no longer have any delusions about my own importance. But failure has some real weight to it, and publishing this novel makes me feel a little bit lighter. And all of the failure I’ve endured (along with the powerful desire for the failure to stop) is threaded through its themes and characters and plotlines.

I guess I don’t know. I’m not even sure the divisions between these genres mean anything to me. Some of the fiction I love behaves like poetry (and vice versa). There are autobiographical novels that are probably more nonfictional than a lot of nonfiction. I don’t write poetry very often, but I would, if I thought it would get the job done. The idea is to find a way to wire your subjectivity out of its cage and into the world. Whatever gets the job done is my policy.

Every project is different. I’ve sat down and finished a short story in one sitting and known it was finished. Other stories I’ve worked on for five years, sensing something was off or missing. Anthropica has dozens of characters and subplots and it took a really long time. I had lots of maps and outlines, and although they invariably proved to be “wrong,” they provided me a little security as I treaded out into deeper and deeper water.

Is it strange that I don’t know? The way it feels, even with a book like Anthropica, which I worked on for many years, is like it somehow just happened. While I was working on it I was also writing and publishing stories. So you know… every day I just tried to do some work. I know that with Anthropica, probably because I was so scared by the prospect of writing yet another book no one would publish, I tricked myself for about a year into thinking it wasn’t a book at all. But once there were hundreds of pages I could no longer sustain the illusion that I was “just goofing around.”

I do enjoy them, yes. But in the time of COVID-19, there really are no public readings. Virtual readings are another thing entirely… I don’t know if I enjoy them or not. They feel strange and remind me of our world’s dystopic conditions.

I do. I would like to know: Why is there anything here at all? Bewilderment forms many of my other theoretical or philosophical concerns. Human beings have a very high opinion of themselves, but from a cosmic perspective, our species just got here and will be gone before the universe can blink. I find our mores and institutions to be mostly ridiculous, and so my writing tends toward an anthropological perspective. I try to see the world the way an interstellar alien might see it from aboard its earth-orbiting spacecraft. What the fuck is wrong with these creatures?

This is an enormous question that I can’t possibly answer adequately in this form. But I do not hold the writer responsible for exposing or correcting cultural or social injustices. The so-called “world” is an enormous dumpster-fire. I think of writing as a kind of communion in pain. It’s a way for me to see you, for you to see me, and for us to have a moment in which we realize that our suffering is shared. To paraphrase Borges, “Throughout time a single person has been born, a single person has died.” This is what the books I love have done for me. They’ve made me feel seen. That’s all. I don’t need a book to heal me, or to teach me, or inspire me. I just want to be seen here in my cage.

Once a teacher in grad school said, in response to a question about the “rules” of good fiction writing, “You can do whatever you can do.” I really liked that. I still like it. Many of the rules we cling to—both as writers and as people—can be circumnavigated by will or vision. (Of course it didn’t go so well for Raskolnikov, but still, I like the idea.)

These are fair questions, and I feel totally inadequate for being unable to answer a lot of them. I don’t really turn to anything. I just kind of… wait. It feels like there’s a dam and it’s containing everything I want to say. Eventually, the pressure is too great and the dam breaks and it all comes pouring out. I can’t control when the dam breaks. I can just wait for it to happen, and then go to work.

Cigarette smoke. If we’re talking childhood home, that is. I don’t like being reminded of it.

I came to fiction from philosophy, and I’m often inspired to write fiction from thinking about other people’s thoughts. Though movies, too, especially in the way they are sometimes structured, provide templates that I want to pour material into.

I’ve been influenced a lot in my life by Ludwig Wittgenstein’s Philosophical Investigations. That text is always with me. Also, the fiction of László Krasznahorkai, and David Foster Wallace, and Anne Carson, and Clarice Lispector, and Borges, and Calvino, and Dostoevsky, and Philip K. Dick. To name a few. The list could be many pages long.

Travel with my wife to someplace far away. A place that doesn’t seem completely ruined by humans. Maybe Antarctica.

I was on track to pursue a PhD in philosophy, but I don’t know if that would have been for me. Philosophers don’t seem like a particularly fun bunch. Anyway, I’m more of a teacher than a writer these days, so maybe I’m already doing the thing I would have done if I hadn’t been a writer.

This has to do with that metaphorical dam. I just need a way to let everything out. I’m a musician, too (a mediocre one), and sometimes playing music can let some of it out. I think if you have what I think of as an “artistic temperament” you have to create things or else you’ll go crazy. What and how you create may be less important than the fact that an outlet exists. I just happen to have, for whatever reason, more talent as a writer than as a musician.

I recently read Found Audio, by NJ Campbell, and fell in love with it. It’s this slim book that seems so deep to me. An amazing accomplishment. The last great film I saw was probably Parasite, though it’s also the last film I saw pre-pandemic, which is maybe influencing my answer.

Not much, I’m afraid. I have this collection of stories I’d like to publish, but it’s finished, so I guess I’m working on thinking of a way to publish it. I have a new semester beginning at the college that employs me, and so there’s a ton of planning and thinking about how to make that a success. That’s something I’m working on. Also, I’ve got two school-age kids and I’m working on making their weird half-virtual hybrid-education productive for them. As for writing, I think I’m waiting for the dam to break. If it does, it does. If not, Anthropica can say what I have to say for at least the next 100 years.