Lauren Haldeman, Instead of Dying

Instead of dying, you move in with us. We fix the basement up with a shower & a small area for your bed & you come to live. I help you carry boxes down the stairs. We set up your record player. We hang up your old poster from 5th grade that says “Save the Wolves.” Once a week, you make grilled cheese for us in the upstairs kitchen. Instead of dying, instead of being stabbed on the street in Denver, instead of bleeding to death surrounded by strangers neither you nor I will ever meet, instead of all that, you get a job at the local grocery store, stocking the shelves, watering the produce: collards, endive, grapefruit. Your face stays your face & your pain gets better & you swim at the Rec Center in the early light of spring & you are so not not not dead. (“One”)

American poet, comic book artist and illustrator Lauren Haldeman’s third poetry title, after the full length collection Calenday (Rescue Press, 2014) and chapbook/artist book The Eccentricity is Zero (Digraph Press, 2014), is Instead of Dying (Fort Collins CO: The Center for Literary Publishing, 2017), published as part of the Colorado Prize for Poetry. Composed as a sequence of seven extended poetic suites/sequences, Instead of Dying writes, as Kiki Petrosino informs in her back cover blurb, “a series of intricate afterlives for her lost brother, braiding these memorials with poignant lyrics that chart the personal outlines of grief.” 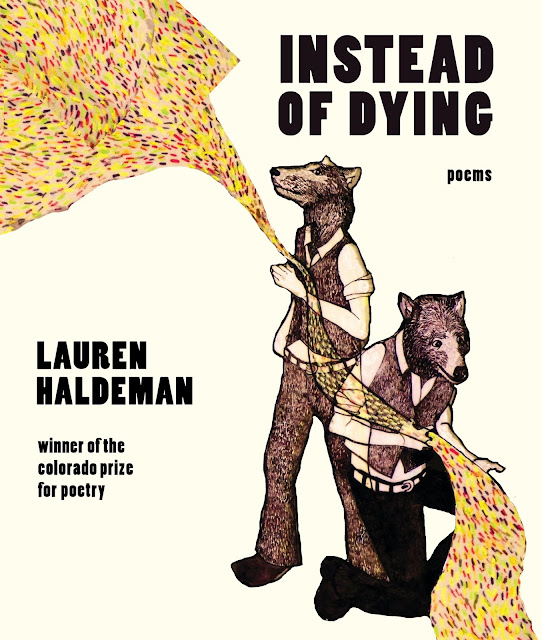 While searching for information about Haldeman’s work online, I discovered a 2016 interview with her conducted by Vancouver poet Rachel Rose that speaks to her first collection, Calenday, which also included some poems on the same subject, that of her brother Ryan’s death. She writes in the interview: “It was right around this time that I lost my brother. I stopped everything at that point and just sort of disappeared into that haze of grief. When I resurfaced, had had written a few things about Ryan -- poems that acted as a sort of working grief machine, poems that I actually used as tools during my early grieving to help me process what happened. Somehow, those poems found a place in the book too.” Further on in the same interview, she writes:

Ryan died in November of 2012 – he was was stabbed to death late at night on a street in Denver. It was a random act of violence. My parents called me the next day. And I just … well, the whole mourning process was very foggy, intense, muddled and strange. I actually can’t remember a lot of it. But about five months after my brother died, my partner Ben and I had scheduled to re-do our kitchen. We were doing a lot of the demolition work ourselves: taking crowbars and sledgehammers to the cabinets and walls, ripping out wood, paneling, metal, etc. I had been processing Ryan’s death in many ways – through counseling, exercise, over-working, and just flat out weeping – but when we started that demolition, I don’t know, there was something about the violence of the actions that struck me right to the core. I thought “This is what happened to my brother’s body.” And one morning, in the middle of the demo, I went to work, sat down, and wrote “Demolition” in one go. It just came out, as it was, like some sort of strange vomit or expulsion. And after I wrote it, I felt much better. It was as though writing the poem revealed something that my brain couldn’t approach.

I like the idea of this, of composition revealing something that the “brain couldn’t approach,” and acknowledge the ability and impulse to write through the difficulty of grief. While this collection might write through grief and her brother’s death, I wouldn’t call this a book about those subjects, instead directing the energy and impulses of grief to explore what might not have been otherwise reached. This is a difficult book, and it is meant to be, unapologetically so, albeit writing one that writes not a darkness but occasionally from a dark place, seeking and searching for answers that might not entirely be possible. Instead of Dying writes out the what-ifs and whys, as well as to the deeper questions of living and being, and of dying and loss, and of the closeness of siblings, as well as a section of short lyrics composed on and for those throughout history who have searched out the heavens for their own answers (there really aren’t enough poems for Nicolaus Copernicus or Johannes Kepler). As she writes to close the third section: “Before the thinking is the knowing / The thinking is added to the knowing [.]”

Let us say the sun. Quiet.
Quiet. Let us whisper

The whole revolution /
Let us bypass the fact

it’s completely insane.
So take up your palm

and move the sun.
Move it to the center instead.

What does it mean?
Now we are turning

Lonely and neutral /
We are turning instead.