Exquisite sense. This labyrinth of accidental causes. Gently brings sensation as a siren to the irrevocable gulf. Harsh departure and outward animal motions.

From causes operating on the bodily frame. Reject excessive mobility, drink water to manage moisture. Judgements scaled against minerals inflexible to the skin.

All ailments rise as fountains from a dilated heart. Peripatetic faculty of three requisite parts: that which moves, by which it moves, and that which is moved.

But we conclude: the pit of symptoms disrupts our model. Though we sense a state of disrupted faculty in excessive labour of mind, fanaticism, zeal, revolutions, etc. As ships run ashore in hunger, we misaffect. (“Of Matter Diverse and Confused. Sect. 5.”)

Andrew McEwan’s second trade poetry collection is If Pressed (Toronto ON: BookThug, 2017), a collection he described in a recent interview over at Touch the Donkey as a book

[…] which attends to the atmospheric, economic, and emotional anxieties of language, and maintains an ambivalence about whether the word “depression” describes an emotional or economic state of being.  Formally, the “Depression Inventory” poems are based on Beck’s Depression Inventory, a questionnaire for self-diagnosing clinical depression. Each poem takes on a question category, teases it apart, and blends in language of economic speculation derived from reports of the financial crisis, and speculation about the depression-like economy of the post-2008 era. They’re anxious and speculative poems that aim for, but never achieve, diagnosis. 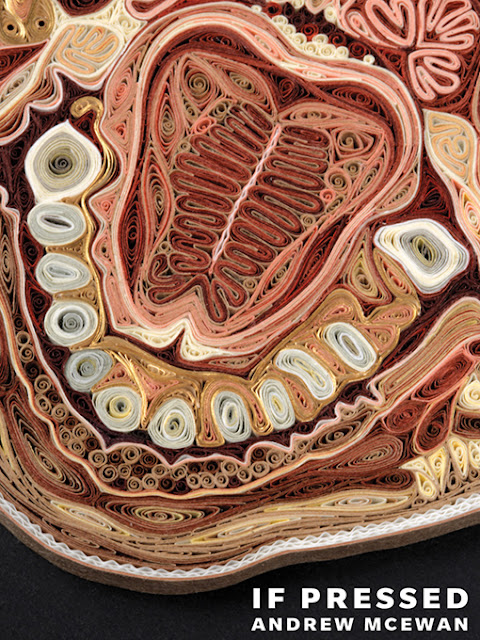 Dedicated “For those so misaffected,” If Pressed is constructed in fourteen sections, including five numbered sections “Of Matter Diverse and Confused.” There are numerous threads that weave and curl their way throughout this book, sectioned and parsed, in an array of fragments, continuations, reports and “Subsects.” Composed as both collage and polydirectional, McEwan’s fragments push with a linguistic zeal and multiplicity, firing in numerous directions simultaneously. What becomes curious is in watching these directions become threads, and these threads become lineages, weaving through and linking poem to poem like a complex strand of dna.

His poems both imbibe and engage a fierce restlessness, unable to stand still, moving in and around anxieties, engaging depression and anxiety as it exists, writing deep from the inside. Basically, this is a very well-constructed book about and around the difficulties of keeping oneself together. The anxieties are palpable. Much in the way Vancouver poet Jordan Scott engages his stutter throughout his own poetry, McEwan has faced and forced his own difficulties into writing, and the effect is illuminating.