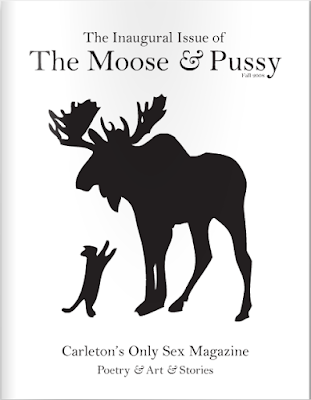 Jeff Blackman’s poetry has appeared in periodicals such as Blacklock’s Reporter, In/Words, and The Steel Chisel, the anthology Five (Apt. 9 Press), and Best Canadian Poetry in English 2015 (Tightrope Books). He keeps warm in Ottawa, Ontario, with his growing family. Visit jeffblackman2001.wordpress.com for poetry and downloadable chapbooks.

The Moose and Pussy #1-5 can be read online here, and copies of issues #6-8 are still very much available through Jeff Blackman via twitter: @jeffblackman2k1

Q: How did TheMoose and Pussy first start?

A: Fellow Carleton student and In/Words contributor Kate Maxfield and I fell in love in 2006, after a courtship hooked to writers’ circles and readings. In/Words is Carleton’s student-run literary press and at the time there were a lot of new spin-off mags, such as the feminist Vagina Dentata, first-year-centric Blank Page, and the French Mot Dit. Our courtship was inextricably linked to writers’ circles and readings, and we were both writing – including lots about our own relationship. It wasn’t long before we thought, heck: let’s start a literary sex magazine. We invited other community-members Jeremy Hanson-Finger and Rachael Simpson to join us as editors, and launched our first issue in mid-2007.

Q: Were there any influences on the journal outside of your immediate circle? Were there any other publications you were influenced by, or were you responding to what you saw as a lack?

A: In a way, yes, we saw a lack. While some of us read Literotica and some read Vice, we weren’t aware of magazines publishing smart sex writing. Even if there were, we still would have gone ahead, because I think it was more an outlet than anything else. It should be noted we were young, early 20s, and definitely not the cool kids. We were outsiders who had found this writing community at Carleton and wanted to make something together, and to an extent get our ya-yas out. Jeremy was especially versed in transgressive literature and felt motivated to disrupt the easy and the safe (he wrote his MA thesis on Pynchon & Wallace), and I think we all had a bit of that: a belief we would turn heads, and that other people would flock to the cause.

Q: How did your experience with In/Words shape the way you approached editing and publishing a magazine?

A: While only I’d been an editor for In/Words, we’d all been regulars to the weekly writers’ circles, monthly open-mikes, and help to make a lot of chapbooks. This community experience led to us all working through selection and design decisions together (at least for the first few issues), as well as the idea that we should print the magazine ourselves (which we did for the first two issues).

However, and In/Words’ editor-in-chief Collett Tracy has rightly said I aimed to leave In/Words in our dust, we definitely dreamt big. We sought out local advertisers, actively solicited art, even bringing student Tanya Decarie (now spoken word champ Twiggy Stardust) on as an illustrator, and got the magazine in stores throughout Ottawa. A few copies even wound up in Toronto and Montreal shops. We wanted to have a core community in Ottawa, which meant we still had Valentine’s Day card-making parties and film screenings, but we loved sending out copies to contributors from around the world. We wanted to go beyond the university, and we thought ourselves rather professional – despite being relative virgins to the world of publishing.

Q: What was the process of soliciting submissions? Did you initially send out a wide call, or solicit from your immediate community?

A: We began local, soliciting work from colleagues in the community. This would have been buttressed by some posters around Carleton campus and emails sent to In/Words contributors. We’d been talking the thing up enough that we knew we could put together an issue largely from our own connections, and it gave us a contributor & reader base which stayed with us. By issue two, if memory serves, we were listing ourselves online via submission aggregators.

So from issue one to seven we went from probably 20 or so submissions to well over a hundred per issue. However for the final huzzah, issue 8 (Codename: Oral) we directly solicited recorded poems from previous contributors, with a focus on community members and favourite contributors. 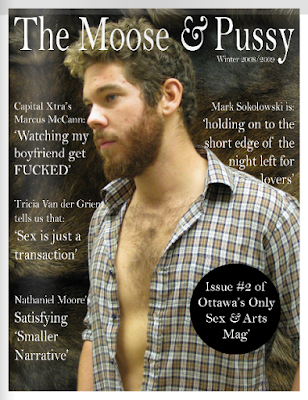 Q: What kind of response were you getting? Did you hold launches for individual issues?

A: We held launches, some with In/Words and some a la carte. Our 2nd launch was part of a fundraiser for Bruce House, a local residence for people living with AIDS, and we were proud of that one. We broadcast a documentary about the house (by Taline Bedrossian, now with the NGC), and the event was co-hosted by the Dusty Owl at Swizzles on Queen. Good crowd, lots of readers, and we felt we were giving back to a city that had provided a wealth of contributions and inspiration.

Like anything else though, interest waned. For the fifth issue, we launched a la carte at Mercury Lounge. We had high hopes for that one (lots of art, big team, and a different venue) but that event really soured me. We had a number of readers, fair-sized crowd, but sold almost no magazines. Sour grapes I know, but I really can’t stand it when people come to your free event, drink a bunch of beer, but can’t drop five bucks for a student-run magazine, y’know?

Q: Presuming you were paying for the publication out of pocket, right? And how was the journal distributed otherwise?

A: We put a little bit of our own money into it, but largely we were supported by a combination of advertisement sales, Carleton Clubs & Societies funding, and magazine sales. Advertisers mostly included sex shops and head shops (Crosstown Traffic was our most loyal sponsor). We also had a few fundraiser events, like movie night on campus. The magazine was sold at events and a number of stores throughout Ottawa including magazine shops, sex shops, and head shops. We also sold a few individual issues and subscriptions online, and the mag did wind up in some stores outside Ottawa, on occasion.

The idea of including ads and focusing on sales was in part driven by a desire to produce a glossy, high quality magazine, and not have to depend primarily on the school or fundraising. It was really fulfilling to be four students in our early twenties going around town securing ad sales to places like Wicked Wanda’s, and seeing our magazine fly from the shelves of Mags & Fags and Venus Envy. In that way we weren’t like any other literary magazine, at least not since sex shops & book shops intermingled on Toronto's Yonge Street in the 1970’s.

Q: But for the final issue, which listed you as a single editor, the list of editors grew throughout the run of the journal. What was the process of working with so many editors for the journal, and how were final decisions made? Why bring on more editors? 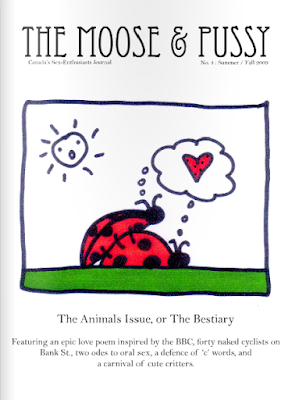 A: For selection, we voted as a committee. For other decisions, we strived for consensus. We brought on more editors in order to alleviate the work load as submissions counts increased, and simply because people were interested.

Q: After eight issues, what was behind the decision to finally suspend the journal?

A: Around issue seven, the last print issue, Rachael and Jeremy moved out of Ottawa to pursue this & that; Tanya would leave shortly thereafter. With the core of the team gone, we lacked the ability to keep up our production schedule (about three issues a year), and decided to focus online. For a couple years the magazine was simply a blog Kate & I maintained. The CD was definitely he last hurrah, one last big to do.

I think also we were getting a bit drained by the hunt for the good content. As any literary magazine editor can attest, you have to read a lot of really bad writing before you find much good stuff. With a literary sex magazine, it was probably doubly so. At a certain point the whole enterprise was just turning us off. The final issue, the audio one, was mostly solicited from previous contributors We used what money we’d saved up and used it to pay an honorarium to all contributors (something we’d never done before), and it was a nice send-off. We were doing again / for the last time, what we had set out to do at first, which was build up from a community of writers a wealth of provocative, meaningful collection of sex writing.

Q: What do you feel your experiences with In/Words and The Moose & Pussy might have contributed to your own writing?

A: Those magazines & their communities were my life for 2007 through 2012, during which time I feel I matured as a writer. Before then I was still the sort of middle-class beat-wannabe who thought every one of his diary entries was inspired. It’s hard to say exactly what the experience of being an editor had on my writing, as at the same time I was hosting writers’ circles and open-mike nights, editing and producing friends’ chapbooks, and taking writing workshops. It’s impossible to figure out what the M&P did for my writing, other than, I hope, make me braver.

Q: Given your experiences with In/Words and The Moose & Pussy, do you see yourself ever returning to literary publishing?

A: If I have a good idea for something new, I’d do it. What’d really excite me would be if someone else with a good idea invited me to help them. 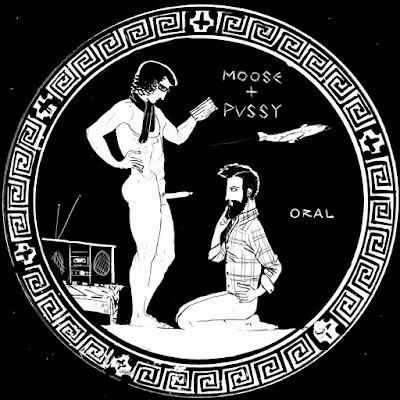 self-portrait as the bottom of the sea at the beginning of time (chapbook). Spring 2011. Sex You Can Read by Ben Ladouceur.