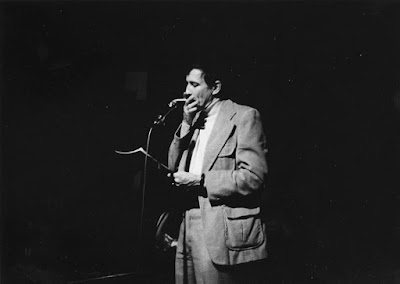 The poet, editor and translator D.G. (Douglas Gordon) Jones has died. A resident of Quebec’s eastern townships, he was one of the few English-language poets of his generation visibly influenced by some of the Quebec poets that came before him, notably the late Anne Hebert, and more recently, influenced by more contemporary poets such as Steve McCaffery, Erin Moure and Stephanie Bolster, making him one of the rare Canadian poets that straddled with ease the line between modernism and post-modernism.

The author of the selected/collected poems The Stream Exposed with All its Stones (Montreal QC: Vehicule Press/Signal Editions, 2010) [see my review of such here], his earlier collections include Frost on the Sun (Contact Press, 1957), The Sun is Axeman (University of Toronto Press, 1961), Phrases From Orpheus (Oxford University Press, 1967), the Governor General’s Award-winning Under the Thunder the Flowers Light up the Earth (Coach House Press, 1977), A Throw of Particles (General Publishing, 1983), Balthazar and Other Poems (Coach House, 1988), The Floating Garden (Coach House, 1995), Wild Asterisks in Cloud (Empyreal Press, 1997) and Grounding Sight (Empyreal Press, 1999). An ‘essential poems’ volume has been in the works for some time, edited by Jim Johnstone for The Porcupine’s Quill, Inc.

See brief biographies for Jones at The Canadian Encyclopedia and Wikipedia. In 2007, he had a short selection of poems appear online at Jacket Magazine.

Donald Winkler (who also provided the photo, above), via facebook, provided this note received via the Translator’s Association:

The distinguished poet, D. G. Jones died peacefully on March 6th, 2016 after a short bout with pneumonia. A University of Sherbrooke professor emeritus, he was also a literary critic and translator. Twice, he received a Governor General's literary award and in 2008, he was made an “Officer of the Order of Canada” for his contributions to Canadian Literature.

He is survived by his wife Monique, his four children Stephen, Skyler, Tory and North, his stepson Nicolas, and his ten grandchildren. A private funeral service will be held.

In his latter years, Mr. Jones became a prolific and passionate computer artist, generating compelling works that were a unique combination of his artistic vision and poetry. This summer his family is planning a retrospective of his computer art in his beloved town of North Hatley, Quebec.

In his memory, contributions to the North Hatley Library would be appreciated (165 Main Street, North Hatley, QC, JOB 2C0).

His work has been a big influence on mine over the years, specifically my paper hotel (Broken Jaw Press, 2002), which included many of Jones’ cadences, predominantly lifted and adapted from my increasingly-tattered copy of Under the Thunder the Flowers Light up the Earth; a book that accompanied me on at least one if not two reading tours.

one mans apartment is anothers
home, we live in the house,
not the hallway, the neighbour
tells her two young girls

a calendar
is not a chessboard, a country
not a destination in itself

some say,
or admit, its the choice
we lack

& whether sound has a colour,
or music, a presentable
shape,
how the text
& picture, overlay

blesst w/ a good ear
can still be guided
by voices

Later on, I composed a short piece triggered by his admission that he wasn’t going to attempt to write again until he’d prepared for the winter, directly lifting a line from one of his short letters, a poem that fell into my poetry collection name          , an errant (Stride, 2006):

the poems will come, he says, once
the wood gets cut

he captures the hard, thin
enterprise
& leans
by the backdoor

a seasonal thing, what
pertains to the breath

not an accident of birth

once it can be seen, it can
finally be transcribed

I had been fortunate enough to produce a small chapbook of his poetry, standard pose (above/ground press, 2002), a chapbook we reprinted in Ground rules: the best of the second decade of above/ground press 2003-2013 (Chaudiere Books, 2013). Given he’d been sending me the occasional poem or two for the past half decade or so, I’d been attempting to convince him to allow me to produce a second chapbook; those queries were the only parts of my letters he never responded to. Despite that, I’d managed to include a new poem in the “Tuesday poem” series, and further new poems in two different issues of the small poetry journal Touch the Donkey: two poems in #3 (October 2014) and a single poem in #6 (July 2015). He declined to be interviewed.

the Mexican billionaire, or maybe
multibillionaire, Carlos Slim
has sold his majority holdings in some telecom
company
I was surprised
having just read his name
in Thomas Picketty’s book on Capitalism
in the 21st Century – no doubt
he’d discovered the gent in
reading Forbes magazine

I wouldn’t be surprised if Slim, reading Picketty,
just smiled . (Touch the Donkey #6)

Posted by rob mclennan at 8:31 AM
Labels: D.G. Jones, obituary

always so sad when a leading light in the poetry world passes. R.I.P. D.G. Jones. (I now know where the line "the jones to jones" came from. in a flash of lightening about a week and a half ago. will put it in a poem.)

.. a wonderful poet, and print maker; a wise but humble man. A true gift to those of us who he was kind enough to read and to give wise advice. A poet who will be remembered.