scrapped as all must learn a
modular nature stops cobbles

eyelets to the release hatch
held by the mind or hand

some soap too past the time
to clean the knives

Canadian writer, composer and performer Samuel Andreyev’s second poetry collection, after Evidence (Toronto ON: Quattro Books, 2009), is The Relativistic Empire (Toronto ON: BookThug, 2015). His poems revel in the fragment, and a ‘serious play’ of shift and switch, composing collisions of sound and meaning that engage a more fluid semantics. As he writes in the poem “PUBLIC EXERCISE,” “semantic units / burst into view like colitis // with plastic tubs for sorting / strong misgivings       since the // ability to write is already apparent [.]” Composed in surreal bursts, the poems feel like exploratory missives, reaching out, and seeking to engage, with titles such as “A POSTCARD FROM BUSTER,” “START TO FORM A NEW OPINION,” “CAN I PLEASE JUST DINE IN PEACE” and “A SUREFIRE WAY TO END UP WITH NOTHING,” as well as three similarly structured poems titled “A PRIME LOCATION,” the second of which opens: 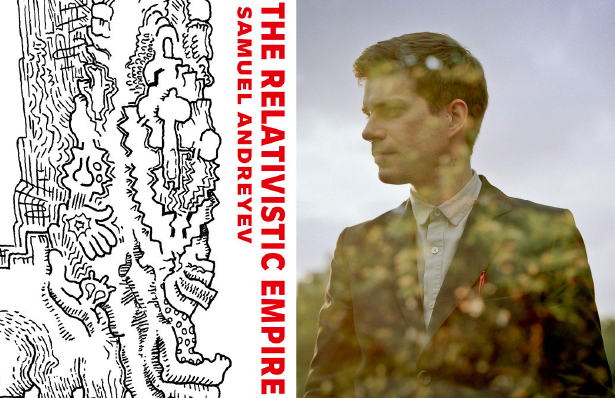 These are poems that react, question and comment, shifting both the familiar and the unfamiliar into their opposites. There are elements of the Canadian surreal in Andreyev’s poems, akin to works by Stuart Ross and others, but with more of an experimental, language-poetry bent, allowing for an intriguing, lively and playfully-compelling blend of structures that doesn’t often meet. The collection ends with the single poem “EXIT LINES,” immediately following the fifty-six section title sequence, that includes:

Posted by rob mclennan at 8:31 AM
Labels: BookThug, Samuel Andreyev