The author of eight books, six of which are poetry, Ottawa writer Blaine Marchand’s most recent books are Aperature (poems, prose and photos of Afghanistan, 2008), and The Craving of Knives (2009), both of which were nominated for the Archibald Lampman Award for Poetry. A young adult novel, African Adventure (translated as Aventure africaine) was published in 1990. His work has been published in Canadian and American literary journals and forthcoming in Pakistan.

He is working on a new manuscript of short stories (entitled Nomads), two series of poetry (one on Pakistan and one on growing up in Ottawa) and on a work drawing upon his journal entries while living in Islamabad, Pakistan (August 2008-2010). He co-edited a collection of Pakistani poetry in English by 24 poets from Pakistan, the UK, US and Canada for Vallum Poetry Magazine, which appeared in the winter issue, 2012. 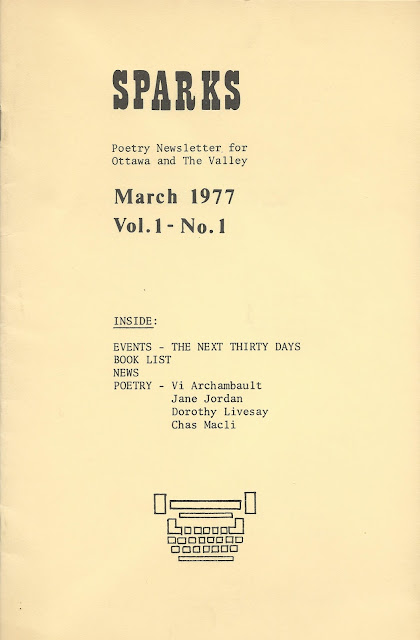 Q: What was the original impulse for starting Sparks magazine, and how did you choose the format? I’ve heard say that Bywords (which began in 1990) was influenced in part by the monthly Poetry Toronto (which began in January 1976). Was Sparks a direct result of it as well?

A: Ottawa has always had a diverse and active poetry scene. The 60s and 70s were a time of an explosion in Canadian literature and poetry. Anchored by the two universities, which largely brought in ‘academic canon’ Canadian poets and held symposiums and colloquiums focusing on poets (such as Isabella Valancy Crawford), the local poetry scene was always remained very much grassroot. So coffeehouses (such as the original Le Hibou on Bank Street and then on Sussex, the Well on Laurier at King Edward), local galleries from Saw Gallery (in its various locations) to Wallacks held poetry readings. Even the NAC held poetry evenings in the early days of its mandate, one of which featured an evening of Duke Redbird. Local bookstores, such as Octopus and Books in Canada, also were willing to host readings.

Because of the two universities and the government, Ottawa has drawn students and employees who pursued poetry as a passion. In the 60s, the universities underwent a hiring spree that saw poets within their ranks – Christopher Levenson, Seymour Mayne, George Johnston, Robin Mathews, Robert Hogg, to name a few. Among the ranks of the civil servants were Arthur Stanley Bourinot, RAD Ford, Harry Howith, Grant Johnson. These poets followed in the tradition of the early civil servant poets Archibald Lampman, William Wilfred Campbell and Duncan Campbell Scott.

There was also an active Canadian Authors Association branch in Ottawa. Joan Finnigan was the most prominent member of the local chapter, with many others not well known but published by Ryerson Press. These included Lenore Pratt and Ruth E. Scharfe.

In addition, you had the burgeoning folk-poetry scene that included Bill Hawkins, Bruce Cockburn, David Whiffen, and Sandy Crawley to name a few.

At the grassroots level, poets from Toronto came to Ottawa to pursue livelihoods. These included Tim Dunn, Misao Dean, Robert Craig, Carolyn Grasser and David Freedman. Also among these was Jane Jordan White, who quickly set up a reading series at Pestalozzi College and whose readings often twinned a local poet and a national Canadian poet, believing that the national poet would draw and audience and give greater exposure to the local poet. She would also invite young poets from Toronto to read at her events.

These poets from Toronto kept referring to a new magazine in Toronto called Poetry Toronto, which not only published poems but had a calendar of events so that readers would have one central reference point to know what was happening across the city each month. This led to a group of Ottawa poets – Robert Craig, Kathryn Oakley and John (as he was then known) O’Neill and myself to attempt the same thing in Ottawa. In a meeting at my place, we began to plot the magazine, feeling it should feature local poets in addition to having a calendar. Publication of Sparks started in February 1977.

Throughout each month, the group would meet, review submissions and gather information about upcoming readings. All of this was typed up and taken to a local printer to do the layout and print 750 copies. These were then distributed to bookstores, the universities, libraries and handed out at readings. Response to the magazine was enthusiastic and submissions flowed in. Cost for the magazine was covered out of the pockets of the five poets, all of whom were then trying to establish careers and found the cost onerous.

In 1978, we approached the city for funding but they did not have the cultural funding they currently have. Then the editorial board decided to apply for Canada Council and Ontario Council Funding. Our requests were turned down as Sparks was deemed too local (and perhaps, unsaid, amateur). Our last issue was in 1978. 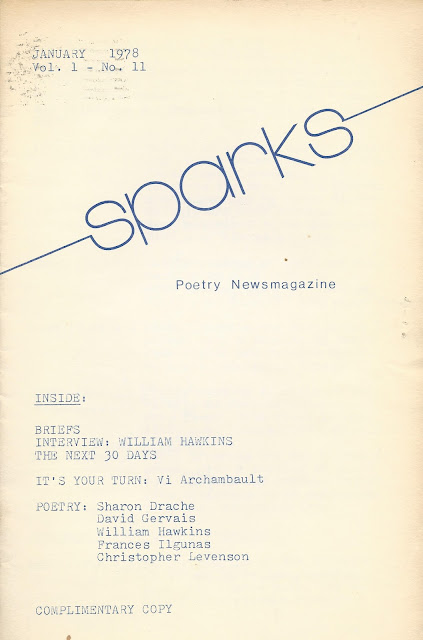 Q: I find it interesting what you say about the universities, given their presence has been all but invisible since I’ve been paying attention (I arrived in 1989). Amateur or not, the fact that Sparks was local was entirely the point, something that I think the Ottawa literary community has been grappling with for decades. What is it about Ottawa, in your mind, that causes so many to deny, refuse or flat-out dismiss the quantity and quality of the literary work occurring within our borders?

A: This is an interesting question.

In fact, the tenure of the times has changed greatly since the 60s and 70s. Back then, even though the universities were always enclaves unto themselves, there was a great interest in the burgeoning Canadian literary scene. Ottawa U had a writer-in-residence program. Dorothy Livesay was one. Writers-in-residence draw younger or emerging poets and create a buzz.

The Ottawa Citizen had a good book page, under the editorship of Burt Heward. He was keenly interested in and supportive of local writers and the readings taking place. He was always willing to do profiles. Today, all we get is a few standard National Post reviews of books, rarely poetry, by authors, from elsewhere on a bland inconsequential page.

Yes, you are correct. Sparks was to assist with the Ottawa community. In looking at your bibliography, it made me realize that I had forgotten how, in the last months, we attempted to make it a bilingual publication, with the assistance of Evelyne Voldeng (a Carleton University French professor) so it would reflect more fully the bilingual nature of Ottawa.

More to your question, many decades ago, I did a reading in Toronto with short story/novelist André Alexis, whom as you might know, grew up in Ottawa. I asked him why he chose to go to Toronto rather than live in Ottawa. He told me point blank that he realized if he wanted to be a presence in the writing community, to make a name for himself, he had to be in Toronto as that is where the scene was. I often think about his comment. When I was young, I thought the key thing was the quality of the writing. While it is, other key factors are making connections, being mentored and gaining exposure, which is easier to do in other places.

Canada has several literary scenes – Toronto, Vancouver, Montreal (to a certain extent for the English side of it) and in the west, perhaps Winnipeg; in the east, perhaps Fredericton. But Edmonton seems to have emerged as a vibrant literary/poetry community, as I saw recently when I attended the Edmonton Poetry Festival. So, what makes one city more vibrant than the others? Consistency and longevity, I think.

Ottawa has always had a vibrant reading scene. That goes without question. But there has been a lot of start and stop. I have been guilty of that myself with the Ottawa Valley Book Festival, which was going great guns and then just petered out. Luckily, the new generation has VersFest, which is a welcome initiative. Literary mags start and stop. There was the aforementioned poet-in-residence at UofO (at Carleton, I think they thought of Chris Levenson as the poet-in-residence, which was an easy way out). On the other hand, Chris did have the Ottawa Poetry group, which brought along many of my generation’s poets, many of whom had come to Ottawa from elsewhere. (I am thinking of Colin Morton and John Barton.) There was the Ottawa poet laureate program, which went defunct after three poets (I think it was) and which Rod Pederson is now trying to revive. There was poetry on the bus program. Things start and do not last. With the exception of Arc and the Lampman Award, there seem to be no long-term consistency. 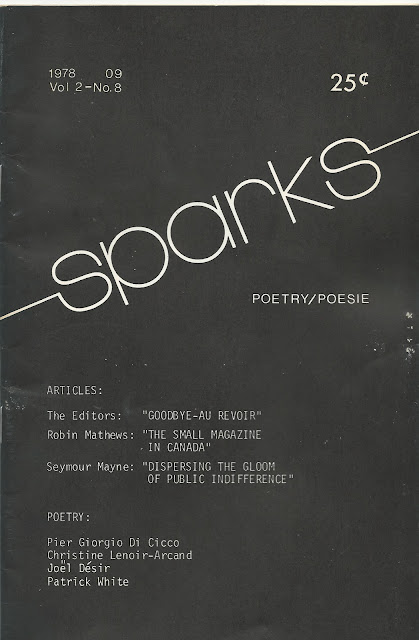 Why is this? Perhaps it has to do with the fact that there is really no “national” poet in Ottawa (by that I mean a poet whose name is known elsewhere) to lead the charge. Surely, David O’Meara, Shane Rhodes, Sandra Ridley, Monty Reid and yourself come close. And of course, there are John Akpata and Ikenna Onyegbula from the slam community. But as the saying goes, close only counts in horseshoes. Going back to Edmonton, one clearly sees the role that Alice Major plays in that writing scene there – Poet Laureate mentoring younger writers, starting the Edmonton Poetry Festival and then allowing others to take the helm so it could continue, continuing to play a role as a matriarch. This is what I think Ottawa lacks – someone around whom the poetry community can rally. Someone who speaks for or represents the community to the larger community. Perhaps, if the Poet Laureate is re-established, this will be a boon if that role is seen as being more than just writing occasional poems for city functions.

There are also good and worthy small presses here, including your own, but none of them seems to have made a mark nationally, the way Coach House or Arsenal have. In a way, this causes poets to look elsewhere to be published. Again, publishing has changed so much since the boon years. There is less funding and even less for promotion of books and touring, so unless the poet is willing to reach into their own pockets to supplement what is available, little recognition of their work exists outside of the city. There are new poets competing for publication with older established poets for the few spaces. Perhaps my comments reflect my age and are generational and demonstrate I am not as in touch with the current poetry scene as I should be.

But, at the core, I think that Ottawa’s reputation as a grey city dominated by politics and civil servants colours how people see the city and its poets. People do not realize what excellent poets and what a diversified community exist here. Luckily, I feel, the poetry community itself is very supportive of its own and that in itself is a richness. It also means that there is not the divisiveness and factions among poets that one finds in other cities – those on the in and those on the out. But it does not somehow lead to Ottawa poets being recognized for the quality of their work.

Q: Despite the short tenure of the journal, you managed nearly twenty issues. What do you feel were the biggest accomplishments of the two years of Sparks?

A: There were two things I feel were real accomplishments in Sparks – the monthly listing of readings, which meant that in one place people could see all the activities going on; and secondly, one I had forgotten until I saw your Sparks bibliography, that we moved toward a bilingual edition that reflected the French and English communities in the city. (Same thing with the Ottawa Valley Book Festival/Festival de livres de l’Outouais, which tried to bring together the two poetry/literary communities.) I think perhaps we may have been ahead of our time.