Tell Me How
Composed by Buddy Holly, January 24, 1986, for his wife Maria Elena Holly, on the occasion of his flight home from New York after his induction into the Rock and Roll Hall of Fame. Originally published in the liner notes for Buddy Holly’s Greatest Hits: Volume 3. MCA, 1988.

“It’s magic!” squeals the boy across
the airplane’s aisle, his explanation
for flight. I couldn’t agree more, returning
to you. Each day, during this week apart,
I was a dark-trapped rabbit
eager to be revealed to the vast
applause of your smile. Tell me, how magic
is the airplane in making possible
this trick? How airplane-like is magic
with the flights of its surprise?
How upward lifting are the tricks
you perform? With a wave of your hand,
you transform all that ever was
for us and will be, every moment
in parting and mile apart, into the now
of our first and last touch
and every touch between.

It would be easy to feel overwhelmed by the expansive montage that makes up Toronto poet and critic Daniel Scott Tysdal’s third poetry collection, Fauxccasional Poems (Fredericton NB: Goose Lane Editions / icehouse poetry, 2015). Following his first two collections—Predicting the Next Big Advertising Breakthrough Using a Potentially Dangerous Method (Regina SK: Coteau Books, 2006) and The Mourner’s Book of Albums (Toronto ON: Tightrope Books, 2010)—Tysdal’s poems in Fauxccasional Poems are a wonderfully playful mix of pop culture, philosophy, historical detail, classical forms and tabloid parlance, much of which exist as framing for a series of lyric narratives that twist, cajole and even contain the occasional surreal shift. Tysdal composes sonnets, pantoums and other structured forms on subjects as diverse as the Taliban, Kermit the Frog, Buddy Holly, Nicholas Cage and T.S. Eliot. However playful and even outrageous at times his subject matter and framings might be, the poems themselves are classically formed, managing an intriguing blend of formal experimentation within highly conservative structures. Through his experimentation, Tysdal shows himself to be very much an admirer of the very forms he twists and collides, allowing new life and breath into structures that so rarely allow for the possibility of real experimentation. In this, for example, one could compare his work to that of Montreal poet David McGimpsey [see my recent piece on him in Jacket2 here].

Sleepless, I watch the clip of myself on my iPad,
the girls pressed tight as a pair of tires to the chassis
of my arms. Abbott and Costello Meet Frankenstein
plays chaste scares on the hotel’s flat screen. Sasha
“Da-ad!”s me into muting the NBC affiliate’s segment
on our Detroit campaign stop. I don’t need sound
to know the hope my image labours to radiate:
“One hundred years ago this very day, in this great
city, hardworking Americans like you built the first
Model T. The prodigious Mr. Henry Ford called it
the car ‘for the great multitude.’ What we need
to build together today, with the same fearlessness
and determination, is a better America for us all,
the still great multitude.” Even a glimpse
of the blueprints my image pretends to possess
would help me sleep, or a glance at Ford’s ancient plans.
Was it from ruins or raw material that he fashioned
new parts? Did he invent a new vehicle for the people
or from his creation were a new people cast? (“Detroit City Meets the Invisible Hand”) 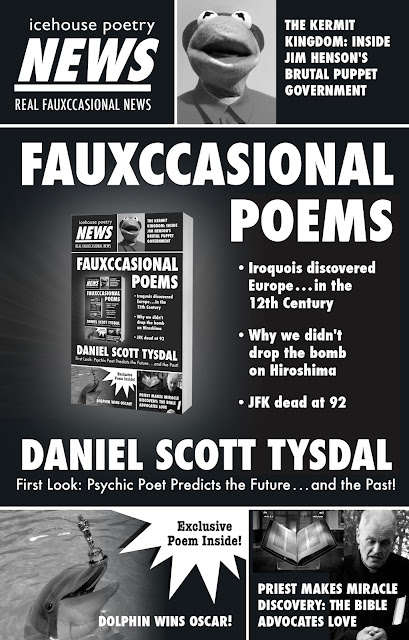 Each poem is composed through a very distinct “voice” and for a particular purpose, including “Ballad composed on the occasion of the founding of the First Church of the Free Follower Fellowship,” “Composed by T.S. Eliot in April of 1926 on the occasion of the fifth anniversary of the first War of Art victory by ‘The Waste Land,’” “Sestinaiku composed on the occasion of the seventieth anniversary of the Enola Gay’s refusal to drop an atomic bomb on Hiroshima, Japan” and “Recorded by war activist John Lennon in protest of the seventy-five years of involuntary global peace imposed at the end of the Great War.” Utilizing historical facts and figures, Tysdal’s deliberate twists and shifts in composing poems for occasions that, for the most part, could never have existed, is a curious set of “what ifs,” writing out the possibilities had a particular point in history turned one way, say, instead of another. His use of “voice” (composing poems that claim composition by another) is reminiscent, also, of some of the work by Ottawa poet Stephen Brockwell [see my recent interview with him in Jacket2 here], whether in his most recent collection, Complete Surprising Fragments of Improbable Books (Toronto ON: Mansfield Press, 2013) [see my review of such here] or his prior collection, The Real Made Up (Toronto ON: ECW Press, 2007). One might wonder what Tysdal is exploring through such faux occasions and historical fictions, but for what the best of speculative fiction writers could ever hope to articulate: a way to see through into the present with fresh, critical eyes.

There is something quite charming in the way that Tysdal composes his speculative fictions, even through his notes at the end of the collection that continue to perpetuate his created facts. There is almost a sense of Tysdal exploring history, just as much as poetic form, through his speculations of it. As he writes:

“Shell”: This poem is often misread as a response to the assassination of Jacqueline Kennedy. However, such a reading is not possible. “Shell” was composed a full year before November 22, 1963, and published four months before that tragic day. Not surprisingly, conspiracy-minded critics have read “Shell” as Munroe’s attempt to warn Jackie of her impending assassination, a plan Munroe knew about, these critics argue, due to her mob connections.