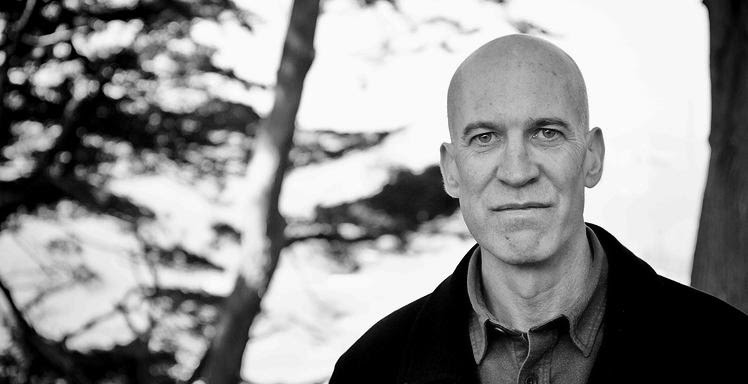 1 - How did your first book or chapbook change your life? How does your most recent work compare to your previous? How does it feel different?
My new book, Trickster is very different from my first book, Collision Center. As Andrei Tarkovsky wrote, “The greatest thing is to be free in your work.” Trickster depends on clarity, simplicity and song. It’s a poem cycle intended to be read from beginning to end like a novel rather than as a traditional collection of poems. It engages with the world as a place where all things are equal: “a blade of grass/equal to the suffering/of a lifetime.” And also “where a fly with one wing, keeps/tipping over in the grass, where/the ants will have him.”

My first book, Collision Center and the chapbook “Recant (A Revision),” were both published in 1994 and were self-conscious excursions into syntax, politics and collage-based writing at the limit of the lyric. After Collision Center was published, I wanted to write about different experiences that required a different kind of process to activate and represent. The experience in my collage-based process existed only at the moment of composition. I wanted to be able to capture experience as something active in my life, not just in my head at one specific moment.

2 - How did you come to poetry first, as opposed to, say, fiction or non-fiction?
I was attracted to poetry because of its speed, immediacy and risk—I still am. John Ashbery’s Self Portrait in a Convex Mirror and John Berryman’s Dream Songs were important gateways to writing for me. I’ve always read haiku to help me distill language. Paradoxically, I probably read less poetry than any other genre because I like to spend time with a poet and read their work exclusively.

3 - How long does it take to start any particular writing project? Does your writing initially come quickly, or is it a slow process? Do first drafts appear looking close to their final shape, or does your work come out of copious notes?
I write slowly. I spend most of my time gathering material and I delay writing a first draft as long as possible. I believe not writing or delaying writing is a vital part of my writing process. When I begin do to compose drafts of poems, I work quickly, usually in longhand in a notebook or on loose notes, revising printed drafts in pen. Inevitably, every poem is unique; some take shape quickly, others become shape shifters.

4 - Where does a poem usually begin for you? Are you an author of short pieces that end up combining into a larger project, or are you working on a "book" from the very beginning?
I work poem-by-poem. I have a general idea about the subject of various groups of poems, but the overall narrative arc of a book usually comes last. Even with Trickster, which is structured like a novel, the narrative arc was one of the last elements of the book to take shape.

5 - Are public readings part of or counter to your creative process? Are you the sort of writer who enjoys doing readings?
I recently read with poet Malachi Black and we collaborated on an unconventional reading format. Instead of each reading for a block of 20 minutes, we took turns reading. We each read sets of poems; each set got longer and we alternated sets. The reading developed its own momentum as we shifted voices and became a song of its own. I think the normal reading format is long and monotonous. Poetry needs a better delivery system—I think film is a better medium for spoken poetry than live readings.

6 - Do you have any theoretical concerns behind your writing? What kinds of questions are you trying to answer with your work? What do you even think the current questions are?
For me, poetry inevitably raises questions about human nature and conscience. As an art practice, I think poetry is an ongoing conversation among human beings about the nature of being human. At this particular moment, we’re witnessing the collapse of the human world, so it’s even more urgent that we understand human potential and how we might change the way we live. As Joseph Beuys said, “…the problem is to understand that man is first a being who needs nourishment for his spiritual needs, and that if he could cultivate and train his primary nature, this spiritual nature, he could develop whole other energies.”

8 - Do you find the process of working with an outside editor difficult or essential (or both)?
Mark Levine was my editor at the University of Iowa Press for Trickster and he was phenomenal—he rigorously engaged with the poems and the arc of the book. I’ve never worked with an editor who could collaborate in such a seamless way and I found it exhilarating. The conversation that developed between us over several months of editorial work was a huge gift to me and to the book.

9 - What is the best piece of advice you've heard (not necessarily given to you directly)?
“Don’t be a Writer, just write.” Anonymously, spray-painted down the hallway of the Iowa Writer’s Workshop in 1987.

10 - What kind of writing routine do you tend to keep, or do you even have one? How does a typical day (for you) begin?
I don’t have a set routine for writing. I write short notes and work on revising drafts whenever I can. To compose drafts of poems, I need long uninterrupted blocks of time, so I work when it’s quiet enough to work.

11 - When your writing gets stalled, where do you turn or return for (for lack of a better word) inspiration?
I constantly watch film—Takovsky, Bela Tarr, Cocteau, Bergman, Lars von Trier, Krzysztof Kieslowski, Satyajit Ray, Kenji Mizoguchi, Antonioni, Godard, Melville, Fassbinder, Pasolini, Fellini, Dorsky, Hitchcock, Kubrick, Marker, Maddin—the list is endless. Film keeps me sane. And I learn more from film, unconsciously, than any other art form. I also listen to many genres of music—too long a list to even begin—I’m continually discovering the dynamics of song.

As I wrote Trickster, I reread Lowell, Berryman (the entire Dream Songs), Roethke, Plath (Plath’s original version of Arial) and later Larkin. I also discovered the poetry and essays of Robert Bringhurst. I read Nijinsky’s diaries, and numerous non-fiction books on ecology, ethnographic records published by the Smithsonian in the early 20th century documenting Native American and First People’s oral traditions and Paul Radin’s translation of the Winnebago trickster cycle Trickster, including his field notes held by the American Philosophical Society library in Philadelphia.

12 - What fragrance reminds you of home?
Cat. I can’t describe the scent, because I don’t consciously smell it, it simply registers.

13 - David W. McFadden once said that books come from books, but are there any other forms that influence your work, whether nature, music, science or visual art?
Art often finds its way into my poems. The practice of making art is a theme that runs through Trickster. The last section is a single poem that extends fragmentary writing in Joseph Cornell’s files and diaries into complete lyrics. Another poem, “Fable” was written to accompany an exhibit by Esther Traugot. The poem “Hare” alludes to a performance by Joseph Beuys. “Metamorphosis” references a Picasso exhibit in San Francisco. At its best, art is an act of conscience that can be transformative and poetry can extend and inhabit that experience.

I experience the “natural world” as the Real; it’s the single most important and unifying force in my work. It’s also become a force of extinction we’ve activated, Nature is no longer passive or consistent, but instead has become an overwhelming counter-force to human activity. The way we’ve altered our relationship to Nature has huge implications for the lyric, which has traditionally seen Nature as a consistent cyclical activity rather than as a living being. We need to renew and heal our relationship with Nature by recognizing flaws in our own human nature. Or to put it another way, as Laszlo Krasznahorkai says, “Evil is not some kind of natural force that continually embodies itself in man...it doesn’t even exist independently of man.”

14 - What other writers or writings are important for your work, or simply your life outside of your work?
Right now, I’m immersed in the prose of Clarice Lispector and Laszlo Krasnahorkai.

15 - What would you like to do that you haven't yet done?
I’d like to live someplace sustainable, remote and wild.

16 - If you could pick any other occupation to attempt, what would it be? Or, alternately, what do you think you would have ended up doing had you not been a writer?
I’d like to make films.

17 - What made you write, as opposed to doing something else?
I don’t question my desire to write; I can’t stop writing, so I simply accept it. I’ve come to understand the practice of writing as the way I move through the world.

I spent 2014 watching an astonishing retrospective of Satyajit Ray at the Pacific Film Archive in Berkeley; every Ray film I saw was brilliant.

Less recently, The Turin Horse by Bela Tarr (supposedly his last film) and Melancholia and Antichrist by Lars von Trier influenced the tone of some of the last poems I wrote for Trickster.

19 - What are you currently working on?
I’m working on a series of prose poems. Trickster was built on the line, so I’m trying to clear my head by writing sentences before I inevitably return to the line.