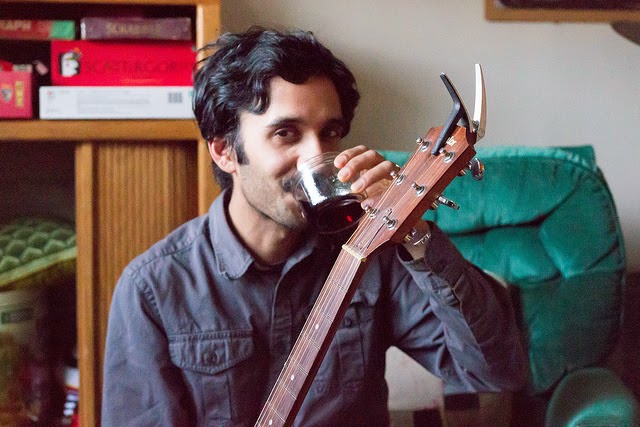 Raoul Fernandes lives and writes in Vancouver, BC. He completed the Writer’s Studio at SFU in 2009 and was a finalist for the 2010 Bronwen Wallace Award for emerging writers and a runner up in subTerrain’s Lush Triumphant Awards in 2013. He has been published in numerous literary journals and is an editor for the online poetry magazine The Maynard. His first collection of poems, Transmitter and Receiver is out this Spring from Nightwood Editions.

1 - How did your first book change your life? How does your most recent work compare to your previous? How does it feel different?
My first book is barely a month old at this date, so I'm in the dazed and delighted stage. But comparing my writing to my old chapbooks or online livejournal writing, I think I've become less overtly sentimental, and yet probably a bit more open to real feeling. Less cloaking. More attentive to syntax and the rhythms of the line. I think I've also allowed myself a range of new subjects I probably wouldn't have touched back then, flowers, computers, other people.

2 - How did you come to poetry first, as opposed to, say, fiction or non-fiction?
I started writing through that common angsty teenage pressure release valve. Lyrics in songs played a part too. I like how saturated in meaning some lines felt when strung together. And just being able to get in and out on a single page was appealing. I don't think I have the attention and capacity for fiction or non-fiction. Also when I was much younger, my elementary school teacher once complimented the first poem I wrote. That kind of thing goes a long way.

3 - How long does it take to start any particular writing project? Does your writing initially come quickly, or is it a slow process? Do first drafts appear looking close to their final shape, or does your work come out of copious notes?
I've never seen my writing as a project. Most of my poems begins as messy unformed things, buried somewhere in sessions of automatic writing. If I see something that might survive, I keep working on it until it comes alive. And yes, this is after filling copious notebooks.

4 - Where does a poem usually begin for you? Are you an author of short pieces that end up combining into a larger project, or are you working on a "book" from the very beginning?
My poems begin as tiny elements: an image, a phrase, a question. It grows from there. I told people I was working on a book for a while before it came out. But I was mostly only working on poems until near the end where I had to sequence. I think I still have to learn how to write books.

5 - Are public readings part of or counter to your creative process? Are you the sort of writer who enjoys doing readings?
I really like them despite the nerves and rarely being as good as I want. It's very important for my work to connect with people. I write my poems towards that. It's such an intimate thing to have people sit quietly and listen to you, to have that trust. Especially with something as potentially volatile or bewildering as poetry. After, I want to kiss all their foreheads and say “sorry” and “thank you.”

6 - Do you have any theoretical concerns behind your writing? What kinds of questions are you trying to answer with your work? What do you even think the current questions are?
Oh goodness. Well, I think I can speak only for myself. I find myself getting obsessed with certain human qualities: how we perceive things, how we try to make sense of this life.  What is this sensation I have no words for? How do we get through the day? Why did that person set himself on fire? Do I want to set myself on fire on occasion? Things like that.

7 – What do you see the current role of the writer being in larger culture? Does s/he even have one? What do you think the role of the writer should be?
I imagine that a lot of poets who get to this question, pause and squirm a little. My first response is “I have no idea.” But if I pushed myself to get heady, this is what I might suggest: We all use language to make meaning out of life. And disrupting or charging that meaning-making machine, can make it spark and whir in really lovely ways. Maybe this ensures you're not taking it (or life) for granted. And we get to connect with each other on new playing fields. Even if it only happens in fleeting moments. I don't know if it is good for everyone, but it's been good for me. I think there are writers who write more overtly political and such--and that's terribly important--but I feel most of them still start with that simple function of lighting up your imagination.

8 - Do you find the process of working with an outside editor difficult or essential (or both)?
Both. It really has to be a good fit or the dynamic can be very difficult. My editor was pretty hands off with my book, which was nice because I had already worked it through quite a bit with my first readers.

9 - What is the best piece of advice you've heard (not necessarily given to you directly)?
Doesn't it seem most good advice is what you already know, but for some reason haven't permitted yourself to follow? It's nice to hear it from another person. With writing it's probably the advice that suggests being very conscious of a reader. That and write much and often. Focus on quantity before quality.

10 -What kind of writing routine do you tend to keep, or do you even have one? How does a typical day (for you) begin?
If we're pretending it's my day off and somehow my 3 year old son has run off happily into the woods, you'll probably find me heading to a coffee-shop soon after breakfast and filling up a few pages my notebook. It's not very complicated. I try to (and have to often) write at different times of the day, but the morning is ideal.

11 - When your writing gets stalled, where do you turn or return for (for lack of a better word) inspiration?
In the scenario above I have another book of poems beside me to dive into if I lose steam. In general, art, music and film helps too.

12 - What fragrance reminds you of home?
Probably an earthy post-rain garden and the smell of my wife and child. Though I don' t think I am reminded much of home unless I am home.

13 - David W. McFadden once said that books come from books, but are there any other forms that influence your work, whether nature, music, science or visual art?
All of the above, I'm sure. Music is probably the most emotional of those forms for me and probably has a direct connection to my writing more than the others.

14 - What other writers or writings are important for your work, or simply your life outside of your work?
A handful in no particular order with apologies to the hundreds I am omitting: Bob Hicok, C.K. Williams, Dean Young, David Foster Wallace, Mary Ruefle, Matthew Zapruder, Lydia Davis, James Tate, Frank Stanford, Anne Carson, Gerald Stern, Raymond Carver, Charles Bukowski, Kathleen Graber, David Mitchell, Zadie Smith, Alden Nowlan, Richard Brautigan, Thomas Lux, Rachel Zucker, a lot of old Japanese haiku poets, a lot of my peers, too many to note.

15 - What would you like to do that you haven't yet done?
I'd like to make a little film sometime. And write a book for children.

16 - If you could pick any other occupation to attempt, what would it be? Or, alternately, what do you think you would have ended up doing had you not been a writer?
I don't call writing my occupation (I work as a maintenance worker to pay the bills). But if I devoted myself to another calling it probably would have been one of the other arts, a painter or a musician. I'm also considering going back into school to be a library technician.

17 - What made you write, as opposed to doing something else?
I have played around with some other arts (painting and music) but it's probably the simplicity and accessibility of the materials for writing that have made it the most appealing. A pen, a piece of paper, this blob of grey matter. It costs very little and one could do it anywhere.

19 - What are you currently working on?
Nothing, happily. Well, getting ready for a cluster of readings. I'll probably start getting back into writing again once the buzzy stuff settle down a bit. Or even take a longer break from writing and create some music. Make some new pathways in my head.

lovely interview. thanks rob and raoul.