Changing horses frequently, one day out I had left Red River in my rear, but before me lay an          country, unless I veered from my course and went through the Chickasaw Nation. Out toward Bear Canyon, where the land to the north rose brokenly to the mountains, Luck found the bleak stretches of which he had dreamed that night on the observation platform of a train speeding through the night in North Dakota,—a great white wilderness unsheltered by friendly forests,          save by wild things that moved stealthily across the windswept ridges. This done, they would lead the ship to an           part of the shore, beach her, and scatter over the mainland, each with his share of the booty. How lonely I felt, in that vast          bush! Except for a very few places on the Ouleout, and the Iroquois towns, the region was          . This was no country for people to livein, and so far as she could see it was indeed          . But for the lazy columns of blue smoke curling up from the pinyons the place would have seemed          . It appeared to be a dry,           forest. In the vivid sunlight and perfect silence, it had a new,          look, s if the carpenters and painters had just left it. it was in vain that those on board made remonstrances and entreaties, and represented the horrors of abandoning men upon a sterile and          island; the sturdy captain was inflexible. The herbage is parched and withered; the brooks and streams are dried up; the buffalo, the elk and the deer have wandered to distant parts, keeping within the verge of expiring verdure, and leaving behind them a vast          solitude, seemed by ravines, the beds of former torrents, but now serving only to tantalize and increase the thirst of the traveller. It kept on its course through a vast wilderness of silent and apparently          mountains, without a savage wigwam upon its banks, or bark upon its waters. They were at a loss what route to take, and how far they were from the ultimate place of their destination, nor could they meet in these          wilds with any human being to give them information. They forded Butte Creek, and, crossing the well-travelled trail which follows down to Drybone, turned their faces toward the          country that began immediately, as the ocean begins off a sandy shore. 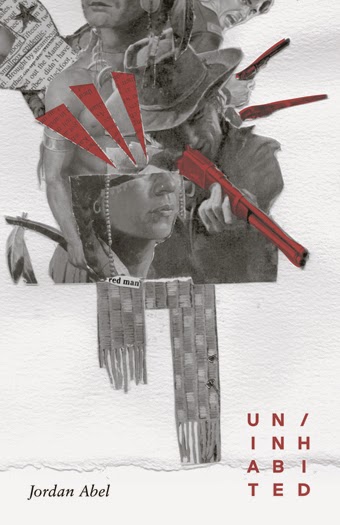 Jordan Abel’s Un/inhabited (Vancouver BC: Talonbooks/Project Space Press, 2014) continues the reclamation project begun through his first book, The Place of Scraps (Talonbooks, 2013). Whereas The Place of Scraps was constructed as a collection of fragments, erasures, scraps, texts, visuals and concrete poems constructed out of Canadian ethnographer and folklorist Marius Barbeau’s (1883-1969) canonical text, Totem Poles, Un/inhabited is constructed out of the texts of mass market works of “frontier” fiction. As Kathleen Ritter writes in her essay “Ctrl-F: Reterritorializing the Canon,” included at the back of the book: “A browse through the collection shows that most of these novels were written around the turn of the last century and, with titles like The Lonesome Trail and Other Stories, Gunman’s Reckoning, The Last of the Plainsmen, Way of the Lawless and The Untamed, they are stereotypical of the romanticism of the frontier, the height of North American colonialism and a time when the indigenous population was being dispossessed of their lands and driven down to their lowest numbers in history as a direct result of European conflict, warfare and settlement.”  The back cover describes the project:

Abel constructed the book’s source text by compiling ninety-one complete western novels found on the website Project Gutenberg, an online archive of public domain works. Using his word processor’s Ctrl-F function, he searched the document in its totality for words that relate to the political and social aspects of land, territory and ownership. Each search query represents a study in context (How was this word deployed? What surrounded it? What is left over once that word is removed?) that accumulates toward a representation of the public domain as a discoverable and inhabitable body of land.

There is something quite remarkable in the way that Abel, a Nisga’a writer from Vancouver, utilizes work that now exists in the public domain to reclaim and critique a representative and cultural space, using “conceptual writing [that] engages with the representation of Indigenous peoples in Anthropology through the technique of erasure.”  Un/inhabited opens with erasure of specific words (uninhabited, settler, extracted, territory, indianized, pioneer, treaty, frontier, inhabited) before shifting to an erasure that shows the text almost as a cartographic map, before stripping the erasure down entirely, comparable to a depleting printer ink or photocopy toner cartridge. The only way these texts hold together is in the ways in which Abel allows them to degrade, before collapsing completely in on themselves. In an interview forthcoming at Touch the Donkey, he talks a bit about the compositional process of Un/inhabited:

After I finished writing Un/inhabited, there was a lot of material that essentially fell to the cutting room floor. I had been writing excessively, and knew that there would have to be substantial cuts for the project to be thematically coherent. As a result, there were many threads that had to be removed entirely. Some of those threads (minority, oil, afeared, etc.) were closely related to main conceptual project, but, for one reason or another, didn’t fit perfectly. Those threads were probably the most difficult to cut. Other threads (maps, speakers, urgency, etc.) were interesting explorations and worked individually, but were easy to separate from the main project. However, as the project continued, there were several threads that emerged that had coherent and discrete themes that weren’t dependent on the pieces in Un/inhabited. One of those threads explored the deployment of literary terms, and, surprisingly, seemed to be supported by the source text. That thread included many pieces: allegory, allusion, connotation, denouement, dialogue, flash back, hyperbole, identity, metaphor, motif, narrative, personification, simile, symbol, and theme.

To be honest, after I cut those pieces, I wasn’t really sure what to do with them. The pieces in Un/inhabited (settler, territory, frontier, etc.) worked partially because they explored themes of indigeneity, land use and ownership. Those pieces were actively working towards the destabilization of the colonial architecture of the western genre. But what were these other pieces doing? What did an exploration of the context surrounding the deployment of the word “allusion” accomplish?

I think, if I were to guess at an answer to my own question, that the thread of literary terms engages with an aspect of the western genre that is, at the very least, unusual. You don’t often think about the western genre being rich with metaphors or allusions or symbols, and, perhaps, it isn’t. But those words are there. Those words are doing something that we don’t normally associate with the traditional foundations of literary studies. There is an exploration here that, I think, subverts the tendencies of literary analysis by compressing and recontextualizing common analytic diction.

Right now, these pieces are not part of a separate project. But they easily could be. I think there’s more there to dig through. Other approaches that could be taken.