south broad’s valu-plus is closing, everything must go
til day’s reflection is night’s, your passing face barters
for itself against the blackness pulling thru us. threads:
kids from south philly high walk by, their shithole of a
school on their shoulders, not anyone’s. let the asians
and black have at each other, say the old whites, shrug-
ging themselves off to the young whites in their patient
bossworship that builds and builds a box to be gutted
between dollar tree and footlocker. kids are actually
small, smelly goats, terry eagleton, the british critic,
reminds us americans. i look out of my box: no parade
of marxist profs. i would like to be open. hey, if northern
liberties on the other side of town burns to the ground
i’m fine with that, so long as we plant a giant sign in
the middle of all the smoking rubble: AMERICA’S FIRST
SUBURB. sure, crumb cake from kaplan’s and coffee
walking around the ortlieb brewery ruins and the jazz
that came from a corner of it—i’ll sell you the postcards—
i’m selling them right now, in fact, for nothing. but that
giant sign i’ll especially sell you, dirt cheap, and we’ll
make it pretty. 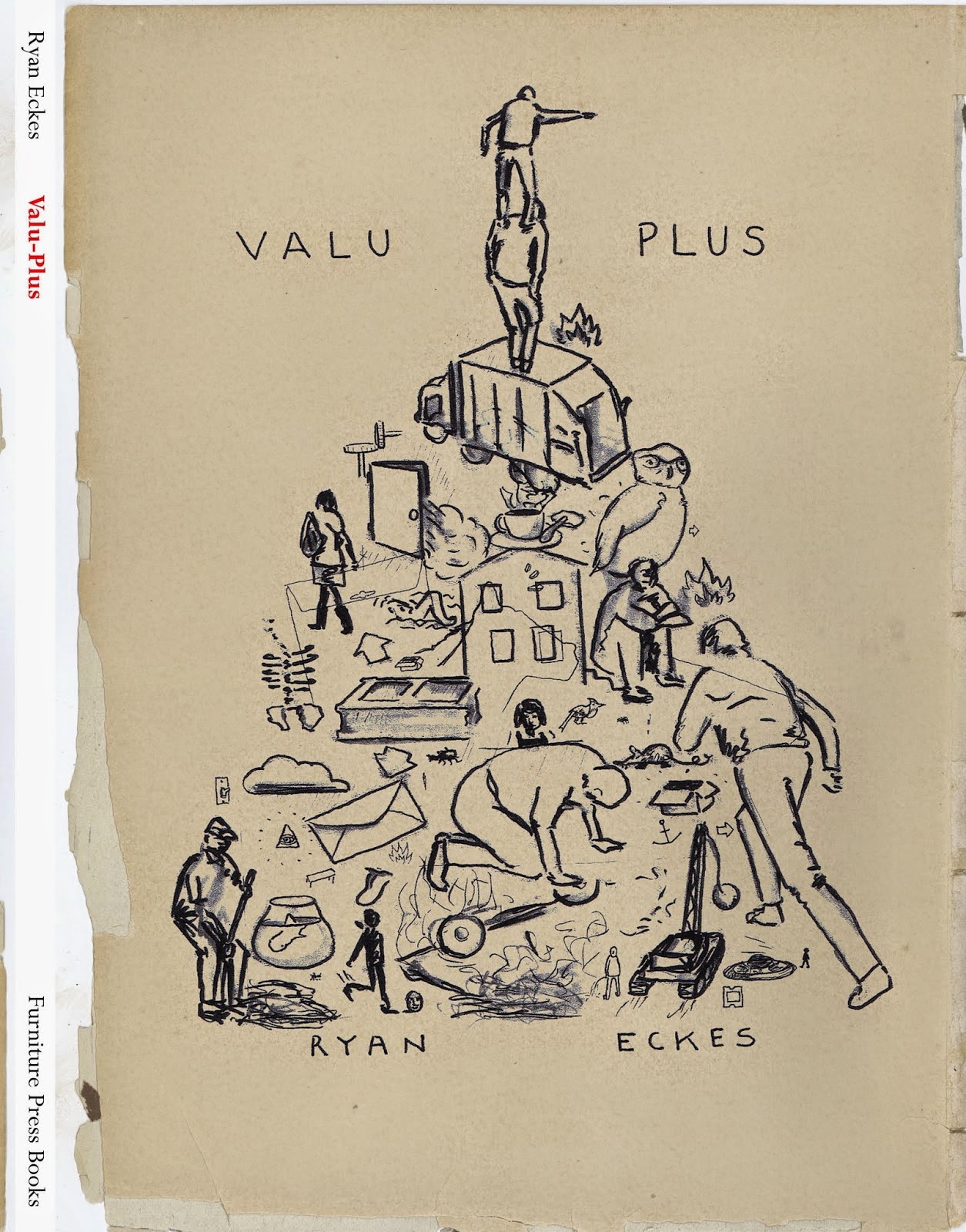 When in Philadelphia recently, we were fortunate enough to catch local poet Ryan Eckes launch his second poetry collection, Valu-Plus (Baltimore MD: Furniture Press, 2014). A follow up to his Old News (Furniture Press, 2011), Eckes’ Valu-Plus is an exploration, often in first-person narratives, of Philadelphia, from the working class ground level of the city to explorations of literary craft and community. There is much here akin to works I’ve seen on and around the City of Vancouver, specifically Michael Turner’s Kingsway (Vancouver BC: Arsenal Pulp Press, 1995), in that both are suites of linked poems that work to articulate something of the physical, personal and psychological urban spaces. Composed in three sections—trudges, slapstick and bluebooks—there is a feel of the notebook to some of these poems, as Eckes records the activities of his immediate city, as well as his own movements, such as the poem “make up,” that includes such observations as “officer i’m just getting / a cheesesteak, i’ll move / the car in a sec” or “the whole year / was a morning / i couldn’t get / enough coffee” to the small rejoinder: “why begin with / romanticism [.]” Valu-Plus includes and responds to seeking employment, cultural and social commentaries, coffee, factories, American poets and the craft of writing.

The people who are cool are not in a position to hire you, eckes. Write that down on your napkin there. Fold it up and mail it to yourself. Mail yourself. When your doorbell rings it’s either valu-plus or jehova’s witness. Take your chances. Wipe your mouth.

Throughout the 1970s and into the 80s, Canadian poetry included a grouping of poets, led by Tom Wayman, that argued for what they called “work poetry,” attempting to articulate the value of physical labour before falling under not only the weight of their own arguments, but the whittling away of the lyric and poetic line. Ryan Eckes’ Valu-Plus is perhaps one of the finer, and more subtle, examples of articulating the poetic and lyric value of work.