Blog Hop: what the stories make of us, 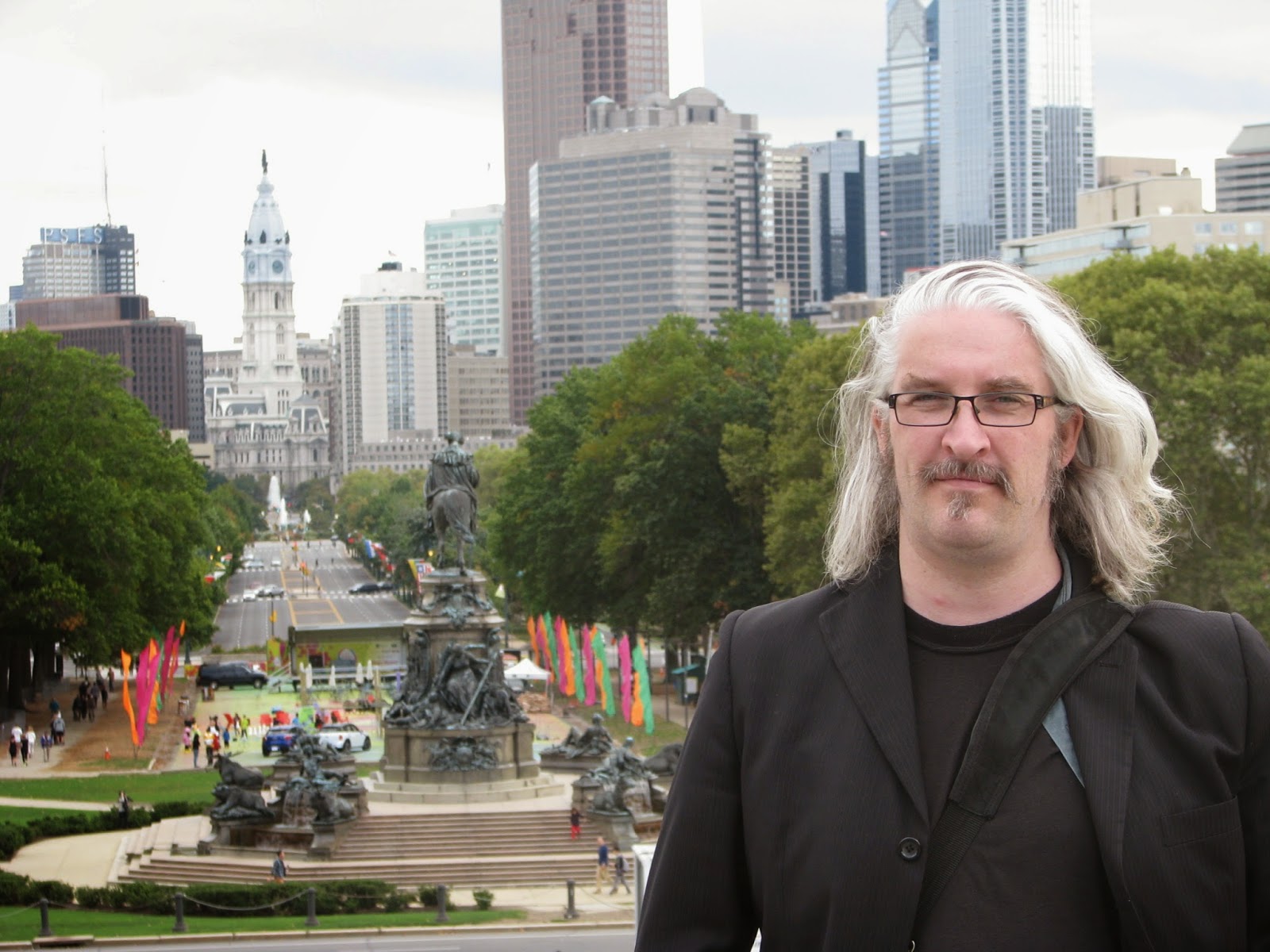 The lovely and talented Montreal writer Tess Fragoulis (who we really don’t hear enough from) tagged me in this “Blog Hop” meme [her answers to the same questions are posted here]. I agreed to participate before I realized that I had already done such, under a different title, earlier in the year. Given that I answered such on my current poetry work-in-progress (our wee babe adds much, but slows all projects down, as you might imagine), I thought it might be worth going through the process again (especially since I’d already said yes) for the sake of my current fiction work-in-progress.

[Photo of myself on the steps of the Philadelphia Museum of Art, October 4, 2014, taken by Stephen Brockwell]

What are you working on?

For the past couple of years, I’ve been accumulating a collection of short stories tentatively titled “On Beauty.” I’m not entirely convinced by the title, but have set such considerations aside for a while, allowing myself to focus on the stories themselves.

The collection is made up of roughly eighteen short stories, each constructed to be roughly three manuscript pages in length (I suspect the manuscript is nowhere near long enough yet). What appeals to me is in a compact exploration of character and situation, attempting to say an enormous amount in a very small space in the most compact language possible. What appeals are those small or large moments of a character’s life or consideration that have enormous repercussions later on, even if that character might not be aware of the whats and the whys of those triggers. We are such complex creations, and so little of what we do, what decisions we make and why are really understood, even in the midst of our actions. My fiction appears to focus quite heavily on that, for reasons I, myself, have yet to determine.

The title originally came from picking up a copy of the Zadie Smith book of the same name; I’d read a piece by her in Brick: A Literary Journal a few years back and been extremely impressed [I even wrote about that here], so when I saw such at a used bookstore in Perth, Ontario (the former BackBeat Books and Music, when Christine McNair and I did a reading there), I had to pick it up. I have to admit, the book didn’t strike me—I suppose it wasn’t whatever it was I thought I expected (I know this is my issue and not hers); I was surprised by the information overload Smith was providing, and I felt that however skilled the work, there was just too much in the way of what I wanted from the story (I’ve since gone through a collection of her essays, and the book was spectacular).

I am interested in the small moments, and in brevity, wishing to include only the information that is essential to the story. I am not interested in providing needless physical description, for example. So much can be suggested through so very little; and so much of it distracts, and has nothing to do with the goings-on of the action (or, inaction) itself.

So far, I’ve had stories from the manuscript appearing in a few venues, including online at Numero Cinq, matchbook lit, Control Lit Mag and The Puritan, in print at Grain magazine, Matrix magazine and Atlas Review, and one forthcoming this month in The New Quarterly.

It might not be moving as quickly as I might like, but I’m still pretty pleased about it, overall. It feels as though I am accomplishing something that is really moving my work forward in a very positive direction.

How does your work differ from others of its genre?

I would think the lyric density alone might be enough to differentiate my work from the work of others in the same genre. I also tend to steer clear of dialogue.

I also tend to focus on particular moments, often leaping over a whole slew of action sequences: the moments of my fiction appear to either work up to a particular action, or away from a particular action, exploring the results of such. There is so much more to explore after the effects of an action, as opposed to the action itself.

I admired very much an episode of Mad Men that, instead of focusing on a particular wedding (which, narratively, wasn’t terribly important), decided to focus on what happened around and after that wedding. So many television programs would have focused on the wrong thing: a wedding episode. There is something about well-written television and film (such as Mad Men, or the film Smoke) that have prompted my fiction for quite some time. How does one tell a story without giving anything away, and yet, leaving enough space to suggest what hasn’t been shown?

Of course, also, the decade-long swath Brian Michael Bendis recently finished carving through The Avengers over at Marvel Comics (he’s currently working his way through an impressive run at All-New X-Men) is a display on how long-form storytelling is constructed: magnificent.

I think anyone writes the way they do because it is the only way they know how. Throughout my twenties, during my first few attempts at fiction, it took me far too long to abandon ideas of what I thought fiction was supposed to be and look like, instead of attempting to discover exactly the form that worked best for my own writing, and my own processes. Once I finally managed to clear that hurdle, it was far easier to continue and complete manuscripts that I was happy with.

We do what we do because we can’t do it any other way. And yet, experimentation and exploration are (obviously) essential to any writer’s craft and development. But I could never be able to (even if I wished to) compose a straightforward literary work akin to, say, David Adams Richards or Guy Vanderhaeghe. Even as a reader, the form simply doesn’t appeal.

When it comes to fiction, I’m difficult to impress: I often consider literary fiction to be far too long and wordy, and overly and unnecessarily descriptive, and so the amount of books of fiction I deliberately stop reading mid-way through are endless. Fortunately, I have been enormously impressed by recent works of fiction by Tessa Mellas, Marie-Helene Bertino, Lydia Davis, Lorrie Moore, Lynn Crosbie, Ken Sparling, Michael Blouin, Jim Shepard and Douglas Glover (for example). It does happen; I just wish it would happen more often.

A decade back, I was amazed to finally read Jonathan Franzen’s The Corrections (despite finding many of his non-fiction opinions rather annoying); it was one of the first books over two hundred pages I’d read that I couldn’t see to excise a single word.

I’m currently in the midst of the new Diane Schoemperlen collection, and am duly impressed (as I suspected I would be—I love her work).

How does my writing process work?

Slowly, and accumulatively. I begin with longhand, and once I’ve exhausted such, I enter fragments, sections, sentences and paragraphs into the computer. I then print out the story-in-progress and spend time scribbling on the page, adding and subtracting, and composing additional fragments via longhand in my notebook to then return to the computer and go through the process again. Some of the stories in the manuscript-so-far have gone through this process daily for many months. Some have taken nearly three years to complete, and others I haven’t quite decided on yet. There is still much to do.