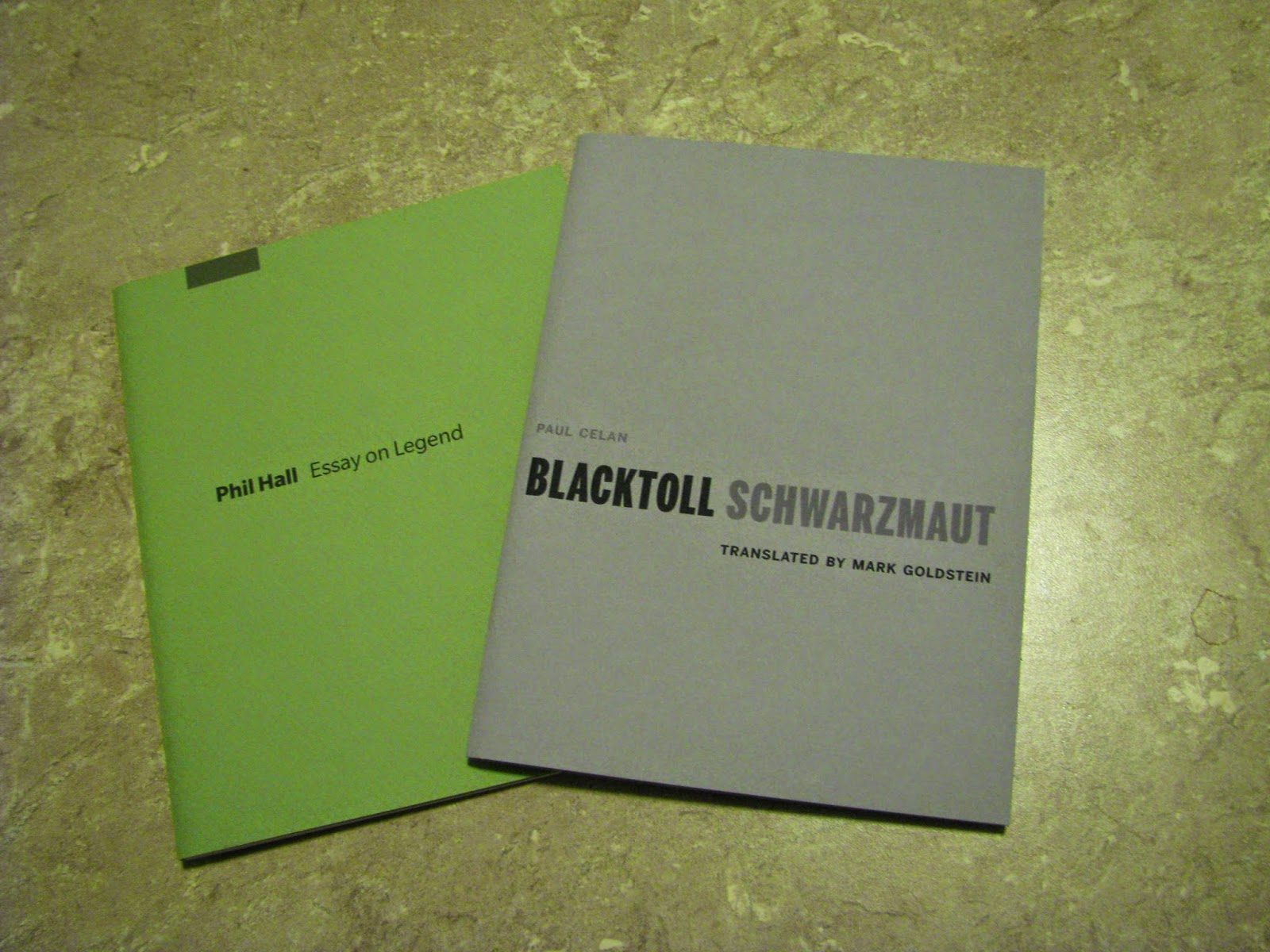 Phil Hall and Mark Goldstein were recently in Ottawa to launch new titles with Goldstein’s own Beautiful Outlaw Press, a publishing house known for beautiful chapbooks produced in small editions that are gracefully designed, thrilling to read, and difficult to find copies of (unless you can find via publisher and/or an author). Phil Hall’s latest is Essay on Legend (2014), produced in an edition of 52 copies “in commemoration of the second annual Purdy Picnic at the A-frame, Roblin Lake, Ameliasburgh, July 26, 2014.” For some decades now, the late poet Al Purdy has been one of Phil Hall’s touchstones, starting, as he said, as a good Ontario “son of Al Purdy” poet, since shifting towards Louis Zukofsky’s 80 Flowers (1978); from stories and the anecdote to “that purse sound of the vowel.” And yet, this short sequence, cobbled and stitched together from a variety of threads, found and salvaged lines and objects, begins with an anecdote about a dog, utilizing such as a starting-point for a sequence of observations on poetry, anecdote and violence, each circling around the very idea of “legend”:

as if some days his name were All     not Al

What is evident over the past few years is just how fluid Phil Hall’s stunning meditative poems have become, and how he refuses to remain static; most likely, if any of this were to find their way into a trade collection, they would be completely reworked, edited, reshuffled and pared down. Nothing is fixed.

Schwarzmaut was inscribed by Paul Celan sometime after January 30, 1967, the date on which he first tried to kill himself “with a knife (or a letter-opener) that missed his heart by an inch.” The suspected cause, among many forces, was a “chance encounter at a literary event at the Paris Goethe Institute on January 25 with Claire Goll, the widow of the poet Yvan Goll, who some years earlier had wrongly accused him of plagiarizing her husband’s poetry, causing Celan’s first psychic collapse.” At the time of his suicide attempt Celan was “saved by his wife in extremis, and transported to Hôpital Coucicaut where he was operated on immediately” as his left lung was severely damaged. From mid-February until mid-October he was interned at the Sainte-Anne psychiatric hospital, where Schwarzmaut was written. Subsequently, it was first published by Brunidor, along with engravings by Gisèle Celan-Lestrange, in a limited edition of 85 copies under the title “Schwarzmaut” in March 1969. In 1970, published by Suhrkamp Verlag, it became the opening cycle of Lichtzwang just three months after Celan’s death.
[…]
Blacktoll is a continuation of my transtranslational experiments first begun in After Rilke (BookThug 2008) and continued in Tracelanguage (BookThug 2010). Where Tracelanguage exemplifies a “shared breath” that seeks to break with tired translational orthodoxies, Blacktoll attempts to embrace both old and new methodologies as singular. Whether one approach is wider or deeper than the other, I’ll leave to the reader to decide in full knowledge that there’s no “poem” there. By this I mean that words are encampments around an absence – a field of energy beyond description. (“A Note on the Text”)

Paul Celan’s Blacktoll Schwarzmaut, translated by Mark Goldstein (2013) continues, as Goldstein himself writes, his engagement with what Erín Moure refers to as “transelation”—a poetic translation that openly admits that there is no such thing as the possibility of direct translation, especially for poetry, and runs a gradient of directly including the translator as co-author of the newly-created text. I’m curious about Goldstein’s repeated return to the texts of Paul Celan, specifically, and if this might be an ongoing project of transelation, Goldstein writing himself through the cover of Celan’s own poems. Either way, the short, untitled, meditative poem-fragments, presented in the original on the left, and transelation on the right, are absolutely stunning. One could live inside them, fully.

HE RODE THE NIGHT, coming to himself,
an orphan’s smock as flag,

It is, it is, as if the oranges stood in the privet,
as if the thus ridden wore nothing
but his
one
mothermarked, se-
cret-speckled
skin.