Philadelphia poet Pattie McCarthy’s fourth trade poetry collection is Nulls (Grand Rapids MI: Horse Less Press, 2014), which is, as the back cover suggests, a four-section “collage of possible meetings which ultimately lead to birth [.]” I’ve only seen a couple of titles from Horse Less Press over the past couple of years, but this is easily the most attractive, and showcases the fact that this is a press worth paying attention to. The first section, “scenes from the lives of my parents,” appeared as a chapbook earlier this year with Bloof Books, and the short poems that make up the section each begin with a small asterisk and opening line. In many ways, the entire suite of short pieces in the first section is constructed as a sequence of footnotes, broadening the scope of information presented within an unseen source. Perhaps the footnotes exist as the real story, the important moments, between the mundane pieces of living. Perhaps it doesn’t matter. 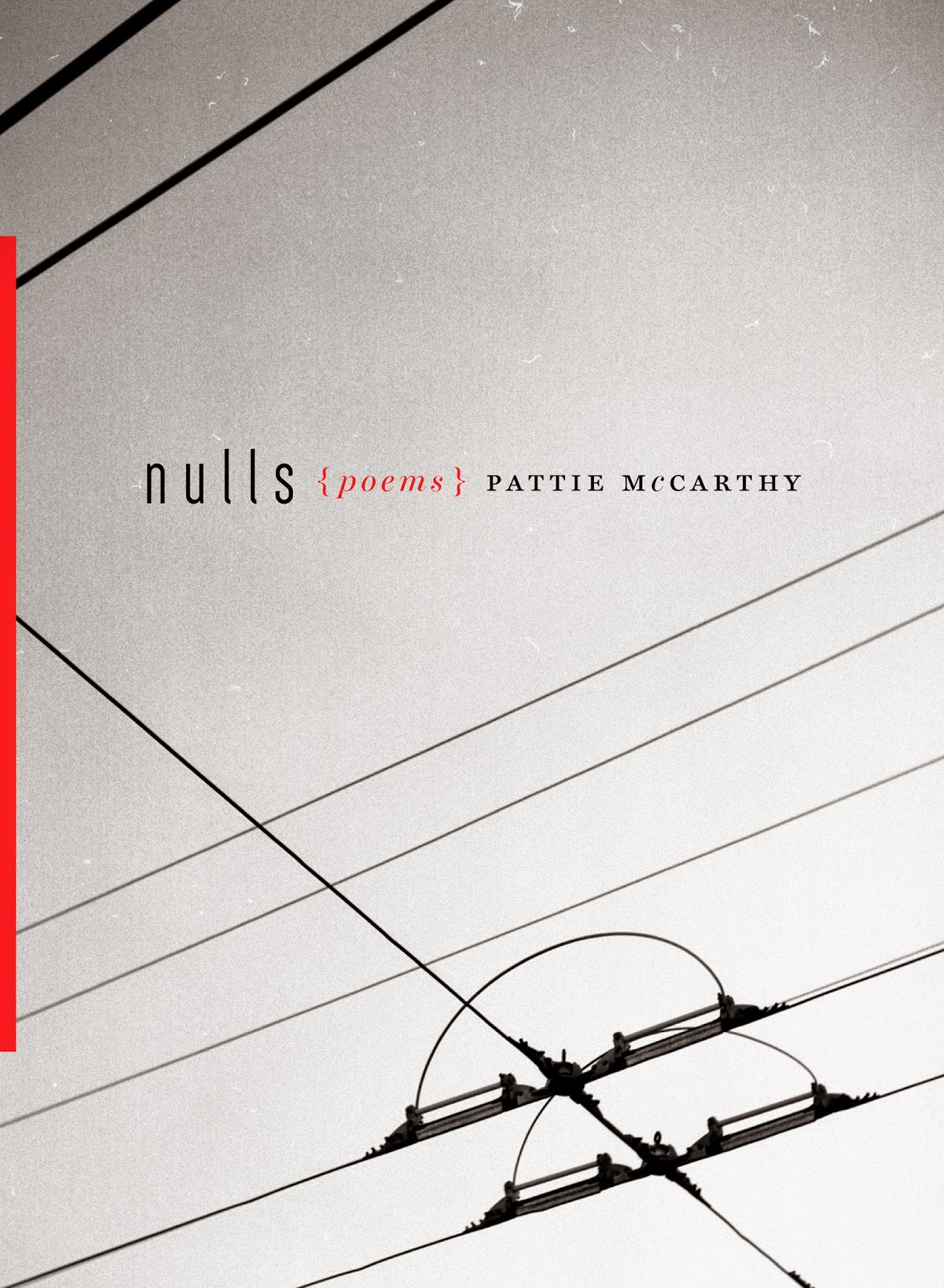 Many of McCarthy’s poems over the years have been composed in part from her apparent love of research into medieval subjects, topics and sources, blended with contemporary, personal and familial references, including her children, all of which come through with an incredible, staccato ease (something she recently discussed in an interview posted at Touch the Donkey). Her poems bounce and leap and have such a wonderful sense of sound and play that I don’t see in most other writers (Sylvia Legris, perhaps, or Emily Carr), as well as playing off a repetition and accumulation that build up to something quite magnificent. As she writes to open one of the pieces in the second section: “WHEN I SAY go TAKE THESE SENTENCES ONE AT A TIME—the / poem may laugh inappropriately. the poem may engage in / sustained and unusual repetition. the poem may prefer to be alone.” And yet, as much as McCarthy’s poems can exist as individual units,they are very much built to live with and even against each other, as Michael Ondaatje wrote in the introduction to The Long Poem Anthology (Toronto ON: Coach House Press, 1970): “Poems should echo and re-echo against each other. They should create resonances. They cannot live alone any more than we can […].” It is as though McCarthy’s work is slowly evolving as a larger, ongoing, singular work of interconnected works, each composed as book-length units.

FOR yes—PLEASE
PRINT FIVE OF YOUR CHILD’S LONGEST & BEST SENTENCES
I can’t do this orally, only headily.
my sleep today was long but thin.
I don’t like the blinding sun, nor the dark, but best I like the mottled
shadow.
but the butterfly is snowed, snowed with snow.
the long green grass with be yours & yours & yours . (“Domestic Cryptography Survey I”)

The four sections of the collection—“scenes from the lives of my parents,” “Domestic Cryptography Survey I,” “a poem including a brief history of autism” and “Domestic Cryptography Survey II,” as well as a section of “Sources”—extend many of the threads of McCarthy’s prior concerns, structures and subjects, blended together in such a way that expand on what she’s previously accomplished. Her interplay between medieval and contemporary ideas of women, children, birth, courtship and marriage work their ways through four sections, each of which focuses on a different point in a narrative from courtship through to marriage, childbirth and child-rearing, with the additional thread of autism. As she writes as part of the third section:

John Langdon Down, in his 1887 Mental Affections of Childhood & Youth described a type of child ho, when first dentition proceeding, lost its wonted brightness; it took less notice of those around it; many of its movements became rhythmical & automatic; […] anxiety was felt on account of the deferred speech, still more from the lessened responsiveness to all the endearments of its friends. Down notes other children who at second dentition suffer crises of intelligence having night terrors & not unfrequently loss of speech.

Part of what has long appealed about McCarthy’s work is the way in which she manages to combine research and confessional in such a visceral, personal way, pushing inventive language poetry to very personal spaces (something Ottawa poet Brecken Hancock has been doing lately as well, such as in her recent series of pieces at Open Book: Toronto or in her Broom Broom [see my review of such here]). McCarthy is adept at writing about parental fear and anxiety, subjects that still somehow have the sheen of taboo, despite the growing list of poets managing to write such with incredible power, including McCarthy, Rachel Zucker and Arielle Greenberg. The poems in Nulls are composed with such a primal force over an extremely large and complex canvas, and delve both historically and personally deep. “[A]ll words in fact have private meanings,” she writes. As one of the poems in the second section begins: