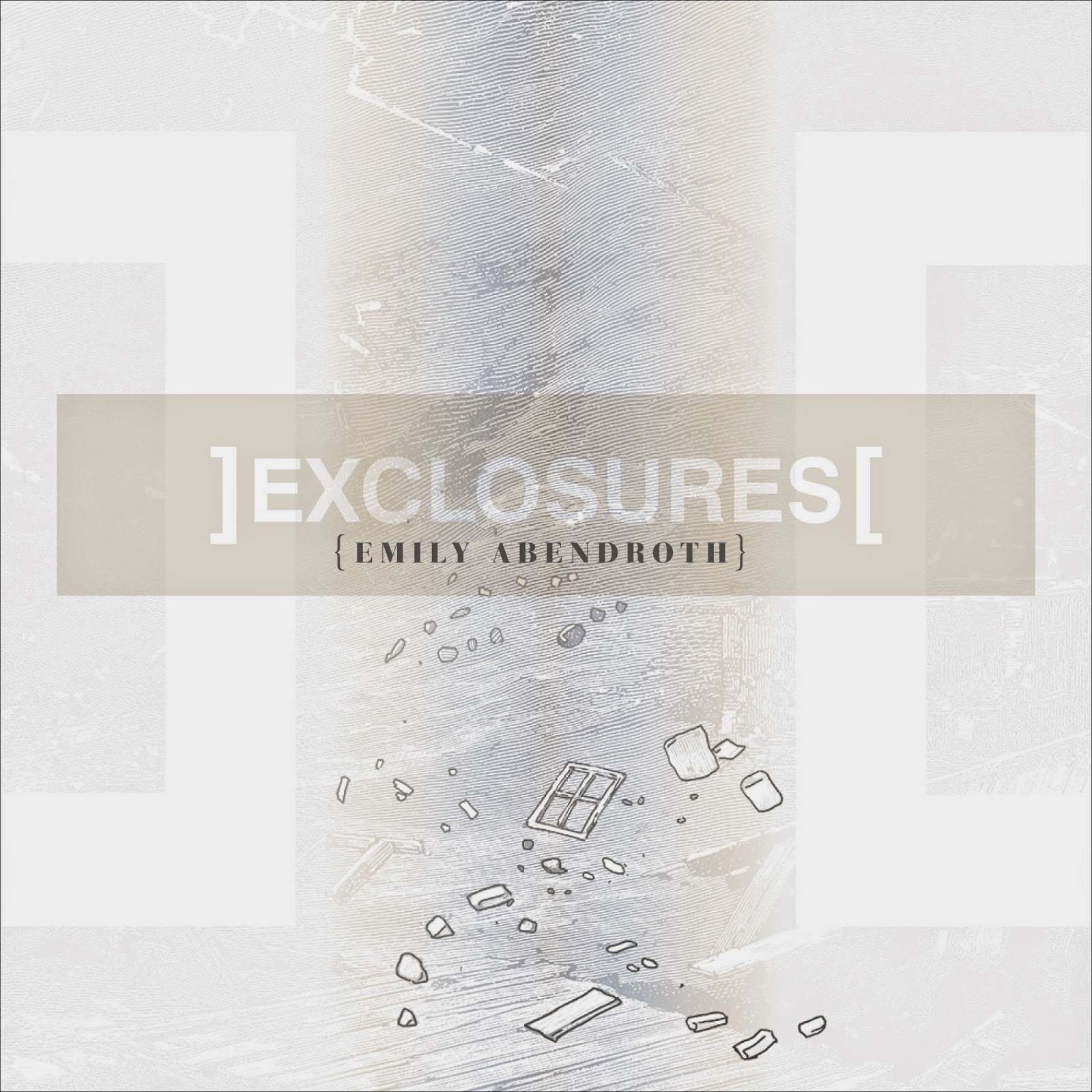 In her first trade poetry collection, ]EXCLOSURES[ (Boise ID: Ahsahta Press, 2014), Philadelphia poet Emily Abendroth has accomplished a remarkable book built out of a series of call-and-response pieces, constructed nearly as collage works that fight and fury, pushing against a wide array of forced cultural, economic, social and sexual boundaries. This is a book of complex rage, multiple voices and an expansive series of threads and complexities that opens up into a large and compelling canvas, writing essay-as-poem through the accumulation of lines, quotes, complaints, accusations, admissions and demands. As the poem quoted above, “EXCLOSURE ]11[,” continues: “We were bred to believe that even trying to make our own lives worth occupying / was the very height of rudeness or imprudence // We were minced into pieces and then recast as the involuntary navigators of an unworkably / narrow map which arrived in our laps under the guise of an etiquette manual[.]” ]EXCLOSURES[ is made up of twenty-six numbered poems, an epilogue and a closing note, “*A CLOSING NOTE IN FAVOR OF THE IMPROBABLE,” as well as a bibliography of sorts as an endnote, each exploring a forced boundary or series of forced boundaries that have, she demands, come to the ends of their lifespans. An intricate example of the poem-as-thinking/essay form, Abendroth’s ]EXCLOSURES[ is akin to works by Anne Carson, and even closer to the theory-thick language works by Lisa Robertson and Erin Moure, or even writing out the social imperatives of Juliana Spahr, Stephen Collis, Mercedes Eng and Jeff Derksen. In the poem “EXCLOSURE ]3[” she begins: “There can be no reducing it / this bitter riff wherein human poverty will necessarily deduce its right to fallen wood / the “privilege” to haul in at least that / when shat upon / when forced to lease whatever miserable material pieces / it might crease or wobble or touch[.]”

In the winter of 2005, the Wall Street Journal ran a mock-panicked and pedantic front page article which observed that “many workers are not fully participating in the economy’s gains.”

It was a bestial claim, a toothless and lazy echo chamber languorously posing itself as a sentence—a menacing signpost disingenuously aimed at leading its millions of affluence-craning readers into a game of indignant irritation, into a deliberate posture of shunning or a running misapprehension of voluntary refusals. As if each of these randomly scrutinized citizens were intentionally and belligerently failing to give 110% to the contents of their patiently waiting check and savings accounts. As if there were a touted sports match or marketing class that everyone on this whole big-ass planet had signed up for and was now incorrigibly botching, clocking themselves in as the abysmal and ungracious students that they had been so abusively trained to imagine themselves as resembling.

It made an individual confused, unable either to properly fuse or to compute the details.

“Could I indeed fully participate in these gains?” one asked.
“Could I be a main player?”
“Could I stop craving?”
“Could I blame?”

“Would it help at all to name these things, in addition to or in defiance of experiencing their shame?”

Question: What prefigures the figure of the modern sniper?
of the online-certified-and-stockpiling-concealed-arms bounty hunter?
of the count-your-riches-and-snitch-on-others futures salesman?

Question: What anticipates the face of the urban ghetto mortgage broker?
of the long distance predator drone crony?
of the home-grown carbon emissions bondswoman?