Everything wants to live, not
even Robocop. The difference
between human, employee
hired hand & the ocean—
simply the road gets blocked, so
Carnegie built a library
sixteen hours of work each
shift your life is mined
by one way & another
bake a cake between the days,
workers, dynamite, dripping
things you don’t want to forget

Robin Clarke’s inventive and brave first collection of poems is not a book that makes you feel better; it is a book that makes you feel. It does not necessarily bring comfort or spiritual discovery—though it could lead to those things. Using an approach that is both collective and personal, the poet meditates on mining culture, on the prison system, on the health care system, on corporate seizure of resources and on systematic economic failure, on attendant environment disasters; in so doing, she always keeps attention on the specifics of working people and their struggles. The three sequences here are full of detailed fragments of incidents—never completely spelled out—that allude to illness and injury, details of childhood, family history, showing humans and earth as victims of the mines and of both slow and sudden disasters, yet the result is somehow ultimately redemptive. 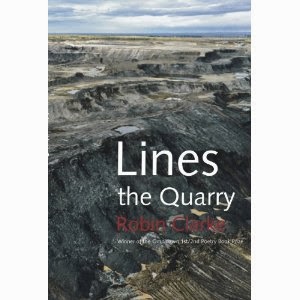 Hers is a collection of documentary poems built via collage, some composed using specifics directly from a series of documents, stretched out across three sections—“My Father or the Prisoner Before Him,” “In the Building Coming Down” and “Lines the Quarry.” In the first section, she writes: “The mine collapsed under the weight of its many / false documents.” These are poems composed out of striking lines pressed firmly into and against each other, all of which contain a brutal honesty, as well as a series of challenges: “The women of Harlan County used a cadillac / to stop the train. And began singing. Which side are you / on?” This book is comparable to Brian Teare’s recent title with Omnidawn, Companion Grasses (2013) [see my review of such here], for their meditative stretches, shared ecological attentiveness and their book-length units of composition, yet Clarke’s poems also seek discomfort, and almost demand the reader respond in some way. Honestly, it would be impossible not to respond to these poems. In terms of some of the structure of short phrases collaged into each other to produce a series of accumulative stretches, as well as for their shared exploration of environmentalism and personal-political responsibilities, one could even compare this to Larissa Lai and Rita Wong’s recent collaborative re-issue Sybil Unrest (New Star Books, 2013) [see my review of such here]. Very much in the territory of “eco-poetry,” Clarke depicts, describes and laments needless destruction of the natural world through excessive mining, utilizing and lifting a language of nursery rhymes and song, implicating numerous structures in the physical destruction of the earth, all of which have been created by human hands. In terms of subject matter, her work is reminiscent of other works on disasters man-made, whether pieces on Frank Slide, Alberta, the bp oil spill or even Richard Brautigan’s infamous poem on Nova Scotia’s Springhill Mine Disaster (there were actually three mine disasters in Springhill, but who’s counting?). I wonder: there have been anthologies over the past couple of years exploring “eco-poetry,” but have there been any collections or critical explorations of poems that work through environmental disasters?

What to do when yellow
fever, husband, child, child
child, child? She may have lived
100,000 years, a marriage
of action verbs & explosives—
the more I think the more rad
I get—mops & brooms used to
barricade the mine entrances
nobody wants a lady
to march one hundred child workers
from Philly textile mills to the
President’s house on Long Island
so she must become the most
dangerous America itself

Clarke describes those lost who, quite literally, “line the quarry,” and is not afraid to name names and list the dead, destroyed or lost, writing out the human and environmental costs of mining, oil drilling and other exploitations of natural resources. Through the first section, the American prison system is explored as well. In the first section, she writes: “dreams say it, together / who did nothing wrong [.]” The poems in this collection explore a series of causes and effects, some of which are quite disastrous, such as the list poem “2010 Workers’ Compensation Injuries, Illnesses, Fatalities,” the opening poem “2006 Workers’ Compensation Injury Data, United States” or the seven-stanza list poem “Mining Disasters in the Month of January, United States,” that includes:

Through exploring various disasters, Clarke ends up exploring memory—“the worst disaster since the last one”—writing about people lost through the prison system, disasters man-made we don’t wish to think about, and just where the accumulation of disaster upon disaster might end up taking us. “What do you love about this / world? Without what is there nothing // else to say?”

love how Robin Clarke's poems prompt you to respond...great review.