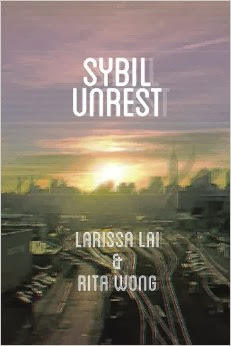 Akin to the ongoing email call-and-response collaborations of Douglas Barbour and Sheila M. Murphy – produced so far as Continuations (Edmonton AB: University of Alberta Press, 2006) and Continuations 2 (University of Alberta Press, 2012) – is Sybil Unrest (Vancouver BC: New Star Books, 2013) by Vancouver writers Larissa Lai and Rita Wong. If this title sounds familiar, it should: the book was originally published by LineBooks in 2008. As the back cover suggests, the collection was “Inspired by renga and composed via an email conversation,” and explores “fresh connections between feminism, environmentalism, and personal-political responsibility […].”Moving through western Canada and contemporary culture, the poem writes on social upheavals, the nature of the citizen, violence and the dangers of capitalism. Utilizing play and pun, politics and social awareness, the poem-fragments display a rushing, accumulated urgency that demands the performance, riffing off contemporary pop and other references like a jazz lingo:

The book is broken up into three suites of short fragments, nearly operatic in scale, the poems are an intriguing blend of the individual works by the two authors. Larissa Lai, known predominantly as a novelist, authored the poetry collection Automaton Biographies (Arsenal Pulp Press, 2009), and Rita Wong is the author of the poetry collections monkeypuzzle (Press Gang, 1998) and forage (Nightwood Editions, 2007), each of which utilize variations on what they collaborate on for their Sybil Unrest—short lyric fragments, social awareness and a cadence that twists and turns and pops. In the acknowledgements, they write a short piece on the origins of the book (I would recommend highly going through their write-up in its entirety, but will only reproduce a section of such, here), that begins:

This poem began in a renga spirit during the 2003 Hong Kong International Literary Festival. It was a fraught moment – the beginning of the SARS crisis in Hong Kong and the American invasion of Iraq which we witnessed through the highly interested sources of CNN and BBC in our hotel room TV. Attending David Fujino and AaronVidaver's playful “july 23/03” at the Kootenay School of Writing later that year was the catalytic inspiration that actually got this poem off the ground. sybil unrest is a back and forth conversation conducted by email over the course of several months.

At our first public reading of the poem at the Kootenay School of Writing, on December 13, 2003, Fred Wah asked “Where did the ‘I’ go?” “We” gesture towards how the personal sparks this dialogue. “Ours” is not so much an individualized “I”, but rather a range of “i”s emerging and fading back as instances that unsettle the (capitalist) time and space we occupy. As such, the “i”s are not reliable but trace movement through the long now and constitute evidence of some hopeful reaching towards friendly coexistence of multiple tactics/perspectives.

I’ve always been curious about the sheer amount of western Canadian poets who can manage a language poetry with a social edge (Stephen Collis, Jeff Derksen, nikki reimer, Maxine Gadd, Louis Cabri, et al), and there is an incredible crackle and pop lyric to the language here, a musicality that sings and rides and riffs, rushing along like an onslaught of water. The poem urges, demands and even calls for action, but provides few answers, perhaps where no easy answers could exist.