Give the word, and disperse early
and displace often. Let gaps fly
open. Let the ambiguous in and
begin with a little old-time melodic
contour, the outcome of movement,
the on-the-job practice of working
out the variations and intervals
of admission. Let in the elements
of incidental intension. As far as
the transparent, bald-faced texts
that fan out into the obvious, release
early, and release often. Let go,
and get rid of the entangled fabric
of arcane meaning, and breathe,
and be something more than
the immediate, repetitious sample. 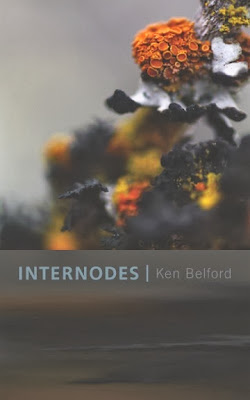 It’s good to see Prince George, British Columbia poet Ken Belford’s new collection, Internodes (Vancouver BC: Talonbooks, 2013), shaped to conform to the poems he writes, as opposed to the standard poetry-book size of just about every other book out there, shifting from the more standard six by nine inches to five by eight inches. Belford’s poems have long been part of an ongoing, larger work, composing short, predominantly untitled single-stanza poems that accumulate to book-length and even larger structures, linking back to decompositions (Talonbooks, 2010) to Ecologue (Harbour, 2005) to much of his previous work. “I lived a branchy past of sprigs and / sprouts and internodes and twigs, / but didn’t occupy the land. In cahoots / with roots, I made a living in the bush.” he writes, and Belford’s ongoing poetry (or even, ongoing poem) is one that works to connect to all other things, articulating his connection to the world through a deeply considered eco-poetic. How does eco-poetry connect to pastoral? Belford composes a poetry that is part of the world, as opposed to the pastoral, which is more-often seen as separate, somehow, from the author and the writing. There is something worth comparing here to the works of American poet Fanny Howe for their interconnectivities, as well for the fact that neither poet have been self-conscious enough about any over-arcing project to name such a thing (and, perhaps, neither of them ever should). As he includes in his bio note at the end of the collection:

“The conventional standards of narrative and lyric poetry give me nothing. The intention of the sequences I write is to assemble words that can be messaged to the habituated souls of the city from the land-aware that live outside city limits.”

Posted by rob mclennan at 8:31 AM
Labels: Ken Belford, Talonbooks