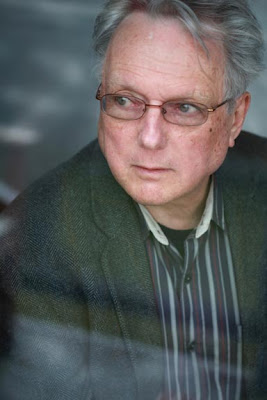 George Stanley was born into an Irish Catholic family in San Francisco in 1934.  He attended Jesuit-run St. Ignatius High School, where he read Latin and Greek, and began to write poetry and to drink. The Jesuits also dispelled some of the fear of sin and hell laid on him by the nuns in grammar school.

In 1952-53 he attended the University of Utah in Salt Lake City. San Francisco had been for him a city of parishes; he had rarely been north of California Street. It was in Salt Lake City that he first encountered a Bohemian milieu, which consisted, he says, of anyone who was not a Mormon.

In 1953, back in San Francisco and broke, he enlisted in the U.S. Army, in order to escape family and psychiatrist. After his discharge in 1956, he returned to San Francisco, and spent a year at the University of California in Berkeley. One Saturday night in February, 1957, seeking the real Bohemia, he wandered up Grant Avenue to a bar called “The Place”, and there met Jack Spicer. He showed Spicer a poem, “Pablito at the Corrida,” and Spicer invited him to join his Magic Workshop, which he had just begun teaching at the San Francisco Public Library.  There Stanley met Robert Duncan. Spicer and Duncan became his mentors. In San Francisco he also met Stan Persky, Robin Blaser, Joanne Kyger, and others.

In 1960-61, Stanley lived in New York, where he met LeRoi Jones (Amiri Baraka) and Joel Oppenheimer. After he returned to San Francisco, he attended San Francisco State College. There he met James Liddy, visiting from Ireland, who introduced him to the poetry of Patrick Kavanagh, and this meeting led him back to his Irish heritage.

In 1971, following Blaser and Persky, he moved to Vancouver, not so much fleeing the Vietnam War, but because, for him, the real San Francisco had died.  He thought of Vancouver as just another West Coast city, not another country, and indeed the distinction is historically blurred. He worked at temporary jobs in bookstores and warehouses until, in 1976, through Persky, he was hired to teach English at Northwest Community College in Terrace, 500 miles north of Vancouver. It was in Terrace that he discovered that he was living in Canada. He lived in Terrace for fifteen years. Terrace, he says, was his second Rome.

In the ’90s he returned to Vancouver, taught for eleven more years at Capilano College, and then decided to retire because, as he puts it, the students and he were no longer taking each other seriously.

This interview is now on-line at Dooney's Cafe.
Posted by rob mclennan at 9:01 AM
Labels: 12 or 20 questions, Dooney's Cafe, George Stanley